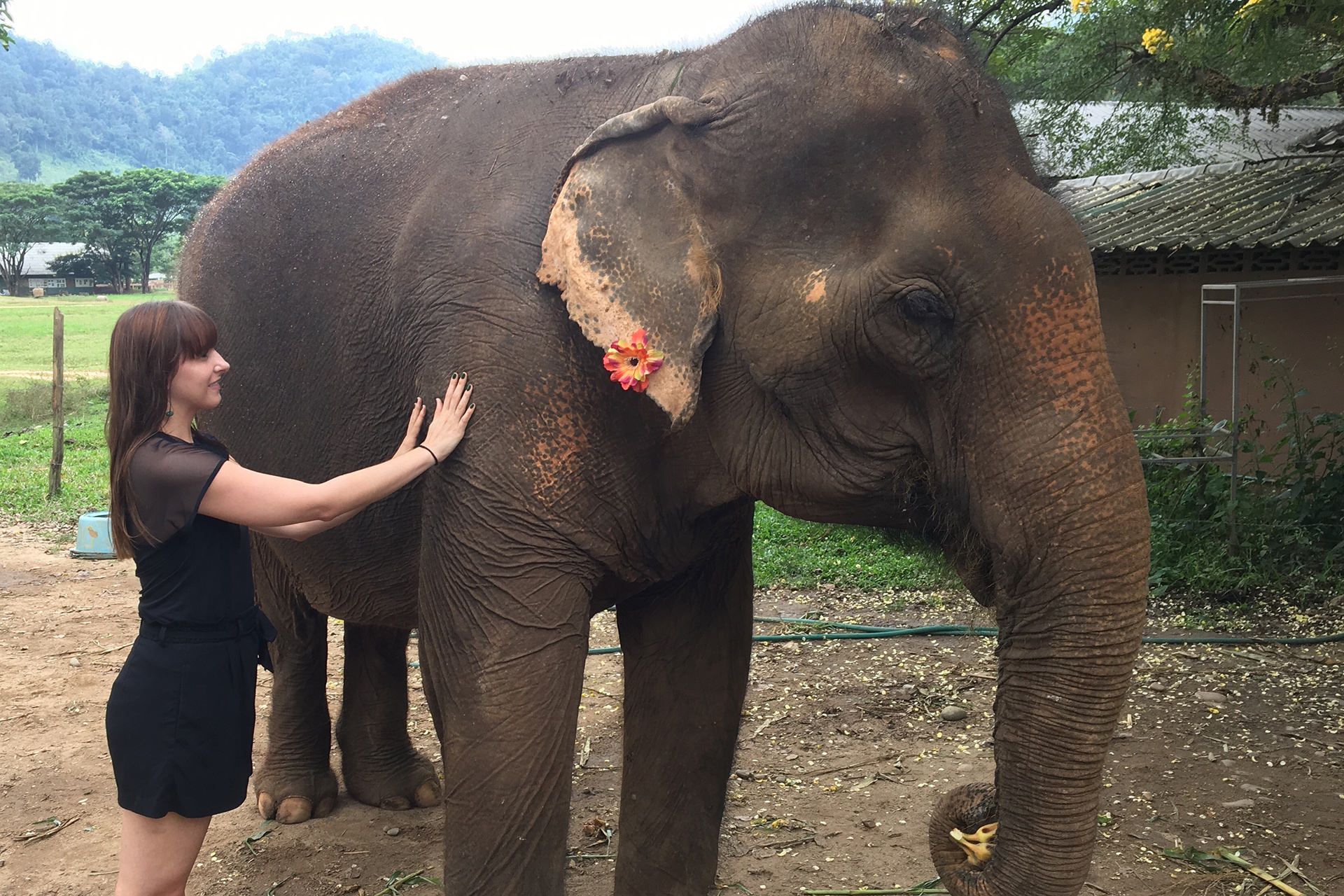 Michelle Henry feeds bananas to Champagne, one of the many rescued elephants, at the Elephant Nature Park in Northern Thailand.

A citizen of the world: Michelle Henry

Michelle Henry feeds bananas to Champagne, one of the many rescued elephants, at the Elephant Nature Park in Northern Thailand. 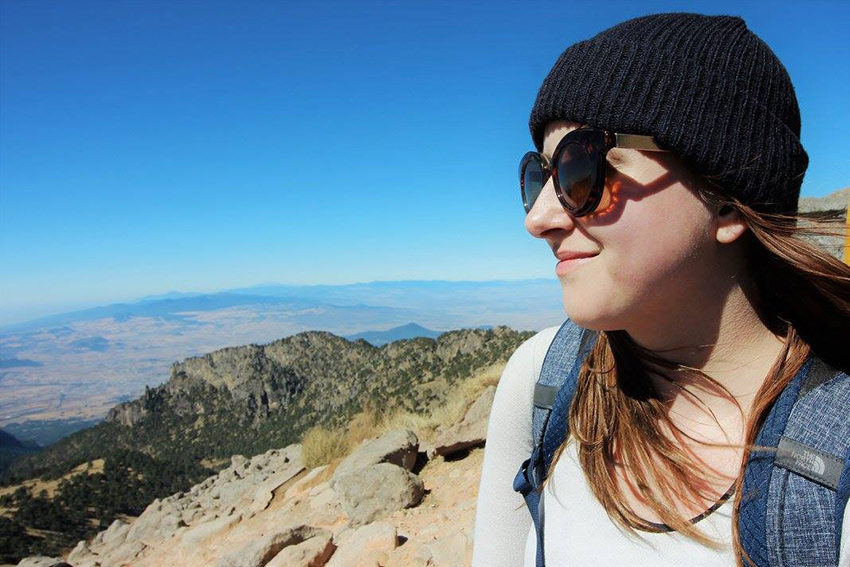 The 1969 movie "If It's Tuesday, This Must Be Belgium," about a group of Americans on a whirlwind tour of Europe, showed the pitfalls and shallowness of that kind of travel. For BGSU 2009 alumna Michelle Henry, that is not the way to do it.

Instead, Henry satisfied her desire to get to know different places by staying a month in each of 12 cities around the world — all while maintaining her job as art director with the Viterbi School of Engineering at the University of Southern California. She was able to do all this as part of the 2017 Remote Year program , which facilitates a yearlong adventure in which participants live and work abroad, telecommuting to their jobs back home. The organization arranges travel, transportation, an apartment and a co-working space in each city. Participants are part of a cohort of 50-75 people.

"You're traveling with a community of like-minded individuals, living and working with these people in different careers and from different walks of life," Henry said. "It's nice to have diversity and being among people you might not have crossed paths with in college or in your career. I made lifelong friends."

She chronicled her journey in photographs and writing on her blog Bourgeoisie Gypsy. She had earlier set a goal to become a better writer and storyteller, and the blog was the outgrowth of that — which turned out to be the perfect venue for sharing her Remote Year.

"I'm still trying to find my voice; it's a work in progress," she said.

That she would undertake such a daring experience is perhaps surprising, but it's not the only unexpected thing about Henry. She is also pursuing a master's degree in education at USC and is a strong proponent of girls and women in STEM disciplines. 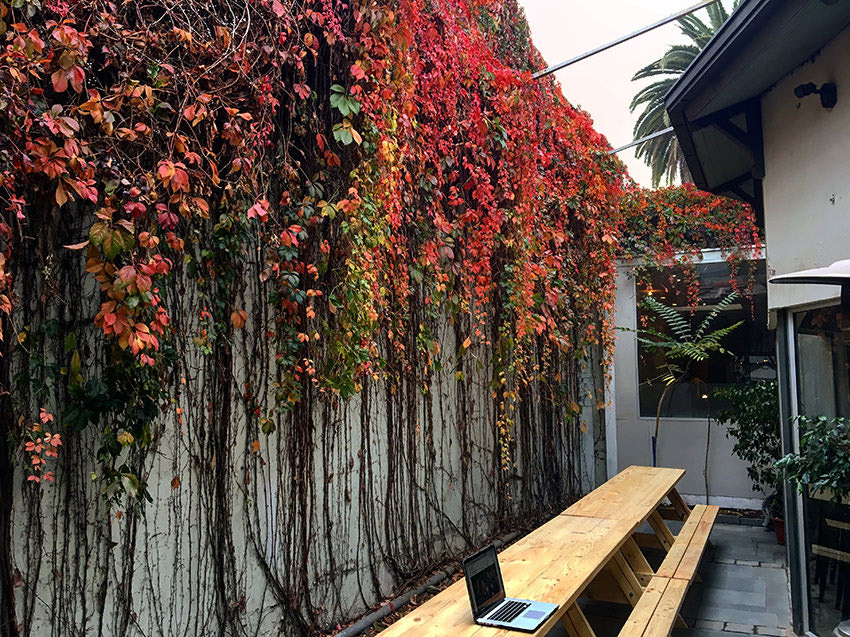 Inspired by the autumnal environment at a co-working space in Santiago, Chile

"I work with in the engineering college among these researchers and I see the power of what they are making in the world, and I've also developed a great interest in computer science," she said. "I want to inspire young girls to go into STEM, and I'd like to eventually help facilitate young people to go into STEM roles. We need more female engineers."

Remote Year was Henry's second experience with living abroad, the first being the semester she spent in Florence, Italy, with the Studio Arts Center International (SACI) while a BGSU undergraduate studying graphic design with associate professor Jenn Stucker in the School of Art.

"Michelle was a standout student and immediately started in a design positions in Toledo after graduation, first with ProMedica and then Stephenson + Taylor before deciding to move to California," Stucker said. "She was one of our early board members of the AIGA (American Institute of Graphic Arts) Toledo chapter and a participant in the 'You Are Here Project' and the 'Sit&Tell Project' as well."

Stucker is a role model for community engagement through graphic design, putting together large-scale projects focusing on history, storytelling and strengthening connections.

"I was part of AIGA Toledo student chapter as an undergraduate," Henry said. "After graduation, she asked me to join the board. I got to see the back end of how the chapter evolved and how it was so involved with the community. It's more like a family than an organization. Jenn brings different groups together, not just artists but the community. We stayed in touch and after I moved to L.A., and she asked me to do 'Sit&Tell,' and I was so excited to be part of the Toledo chapter again.

"Her Design Theory class was the first time that I broke out of standardized graphic design. She set the bar and she really did think differently about graphic design. To this day, I think about how she always looks for the deeper meaning and connections in her work. she really elevates the work of her students and everyone around her. She's very creative, and it's inspiring to be around her."

Growing up in Perrysburg, Ohio, Henry was used to spending pleasant summer vacations with her family at the beach in South Carolina, but she longed for more.

"I knew as a young girl there was so much more to life outside the U.S.," she said. "I read books and watched movies, and the words and pictures gave me that wanderlust. My semester with SACI made me want to see and experience everything the world had to offer. It was the stepping-stone into traveling." 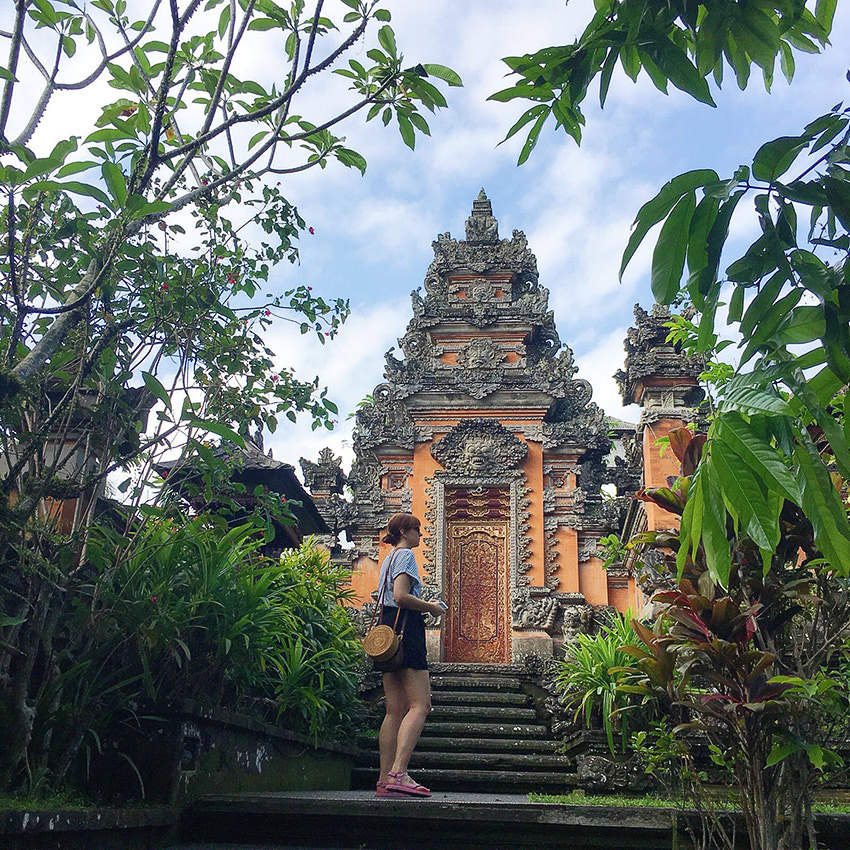 Now back in Los Angeles, she said she is experiencing "a bit of culture shock."

"Being back is both easy and difficult," she said. Easy, in that she loves her life there and her work team and has settled back into her routines of going to her familiar Pilates studio and farmers market. "I've now gone a whole month without being in an airport."

But hard, because she misses the exhilaration and challenge of adapting to new cultures and languages and discovering new things.

"Also, because I was in different time zones but still working eight hours a day, I always overlapped that with West Coast time. So I might go to a café and write and read or go to a museum, then go to my co-working space. I could work but then be free again. Now it's 8-5 and I miss my freedom," she said.

She also misses the minimalism of living with very few possessions. "You're just traveling with one suitcase, about 50 pounds, and you're traveling with the same stuff all year long. Most of the places I was in, it was summer, but I brought a packable down jacket that I used in Buenos Aires and in Kyoto, Japan. It's very liberating living with less, not having to have things that weigh you down."

It was not only curiosity about other lands that intrigued Henry, but also her desire to grow as a person. She wanted to go "to places that I could engage with and use all my senses and test my flexibility and patience and try out languages and cultures," she said.

After moving to Los Angeles, she traveled and spent time in Latin America, but felt it was never quite enough time to deeply experience a culture. "I realized that one or two weeks in a location wasn't enough for me. Maybe something was missing," she said.

"I heard about the Remote Year program and I wanted to do it. It was the right time in my life and I enjoying traveling. I had worked for USC for three years and had proved myself in my position. I applied and was accepted into the program."

However, she was hesitant to broach the subject with her boss, thinking he wouldn't say yes. Luckily, it turned out he had run his own company and had lived abroad for several years so had international work experience.

"...in terms of your whole life, one year is not that much."

"He was an advocate for me with HR and negotiating a telecommuting contract for an entire year so I could remain a full-time employee working remotely http://www.sheworksabroad.com/how-michelle-persuaded-work-to-support-her-extraordinary-year-abroad/," she said. "It was pretty unprecedented, especially in the higher education university culture. It was really amazing having them give me this opportunity."

Even though it meant leaving her partner and family for a full year (except for a few short trips home for photo shoots or specific events as per her contract), "They were pretty supportive. And I read somewhere that, in terms of your whole life, one year is not that much."

There were places she related to more than others, she said. Mexico City was her definite favorite, the place she felt she could easily live.

"Even though I grew up in Ohio, the Midwest, for some reason Mexico City immediately felt like home to me," she said. "The culture is so vibrant and people are so warm and friendly, very family oriented and down to earth, and I felt safe."

She also especially enjoyed the food there and in Japan. "I love food; going to markets and looking at all the local foods is so intriguing to me. Every neighborhood is a pocket of different cultures, like a little United Nations." 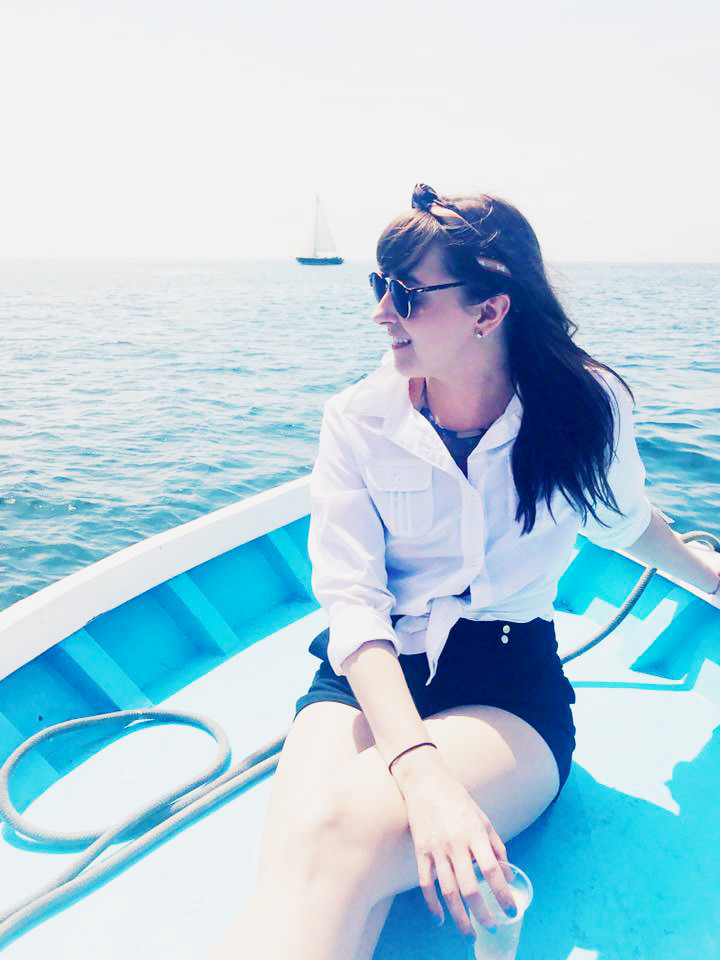 On a peque peque, a traditional fisherman's boat, sailing through the sea in Pucusana, Peru

The most challenging city for her, but maybe the place she learned the most, she said, was Kuala Lumpur, month 10 in her year away. It was her first stop in Asia and with its great swirl of overlapping cultures and languages and loose structure, it was a bit overwhelming.

"But KL taught me to go with the flow, to stay optimistic. Even though I was uncomfortable, I learned a lot there, especially by the last week. I felt I was there for a reason."

That life lesson, and really, of the entire experience, is one that has stayed with her, she said. "You have to be uncomfortable to grow as an individual. If you stay the same, you won't grow. I always thought of myself as pretty open-minded and pretty adaptive. But I'm also very Type A. Before, whenever I traveled I had an Excel spreadsheet, with how long it took from the airport to the hotel, from the hotel to the restaurant I'd already booked a reservation at.

"This year I tried to be more laissez-faire; I even booked a one-way ticket. I became more willing to embrace the unknown and let things happen.

"I also always want to find out where someone else is coming from, why they do what they do. I'm trying to get to know and understand people who are different from me. I think this kind of experience causes people to have less fear and hatred of what they don't know. You're learning about yourself and others, trying to find the positive points. I'm more likely to slow down now and try to understand different points of view before I talk or react."

Now, she says, "One year wasn't enough. Being back here in Los Angeles, I do love my life here but I do want to see how I can incorporate international work in my life in the future. It's nice being back to hone in on what's the next step in my career."