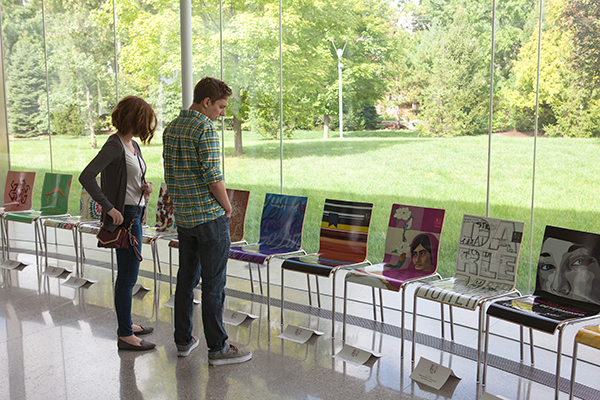 Patrons view the “Sit&Tell” chairs at the Toledo Museum of Art Glass Pavilion.

Jenn Stucker is inviting us to pull up a chair and listen to a story — 100 stories, and 100 chairs. Stucker, chair of the graphic design division in the School of Art, is the creator of “Sit&Tell,” a project in which graphic designers and artists created chair graphics related to stories told by residents of eight Toledo neighborhoods, preserved through audio recording. BGSU students and faculty were integral to the project, a collaborative effort among Stucker; AIGA Toledo, the Professional Association for Design; the Toledo Arts Commission and local manufacturer MTS Seating, which donated the chairs. 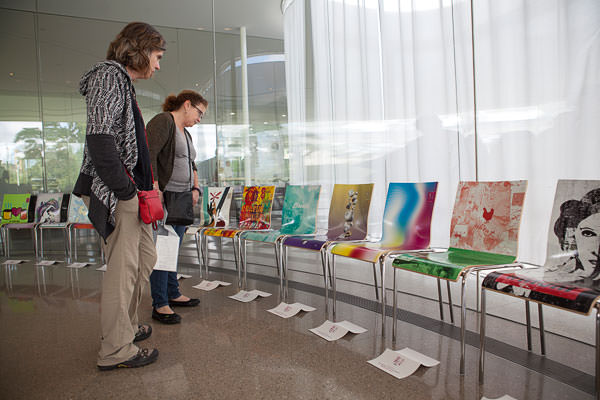 The result is a cultural and artistic achievement that unites communities and allows members to learn about themselves and one another. Stucker said that in choosing a focus for the project, she was inspired by the “strong women” theme of 2016 World Storytelling Day. Some of the stories people tell are tales of notable events, others are remembrances of and memorials to strong women and their often difficult lives, others of the power of sisterhood. As storyteller Dora Lopez said simply, “Gracias, hermanas (Thank you, sisters),” for paving the way. The project captured some notable speakers, such as Doris Hedler, the oldest living Chinese woman in Toledo, Stucker said.

“It’s a terrific example of graphic design in the service of both community engagement and outstanding student learning,” said Dr. Katerina Ruedi Ray, director of the School of Art.

“Sit&Tell” has already garnered two prestigious awards. First was a Platinum award in the Creativity International Print and Packaging Design awards. Submissions came from 41 countries, and of the winning works only 3 percent received platinum. The project also won a Merit Award in the respected design publication HOW Magazine’s International Design Awards, a very competitive event.

Now the community has the opportunity to buy a one-of-a-kind chair, during an online auction that closes Nov. 28. Proceeds will go to the Arts Commission for facilitating art programming for young people in the Toledo neighborhoods. Bids start at $50, or a buy-it-now price of $350, the retail price of the chairs. Several chairs have already sold.

The public can have a last look at the collection all together at the next Art Loop from 5:30-9 p.m. on Thursday, Nov. 17, when they will be displayed at the AIGA headquarters at 705 Monroe St.

“The chairs are so interesting, so beautiful and diverse,” Stucker said.

Serving as “blank canvasses” for the 80 carefully selected artists (some created two chairs) were the 100 curved, chrome-legged birch chairs from MTS. “I chose them because of their clean, simple design and made them all the same to give a uniformity to the collection,” Stucker said, adding, “MTS has been wonderful in every way, supporting the project.”

BGSU students in graphic design and media and communication got the chance to design chairs themselves, for those who were accepted into the juried project; to record the stories told by community members; and to help repeatedly set up the traveling exhibition. The chairs were shown in groups of 10 for two weeks at a time in the eight neighborhoods.

Perhaps most importantly, Stucker said, “the students had the opportunity to see how this project evolved, from first hearing about it from me in class to participating but also seeing how much perseverance you have to have to see a big community project like this through. They got to learn about the proposal process and then managing all the details, such as making sure all the release forms were signed to checking each chair to make sure the print format was ok.

“I’ve learned from running marathons that it’s not just the race, it’s the preparation. Every day is the race. You go mile by mile. You have to have integrity and the commitment to see it through.”

This is something Stucker has also learned through long experience with community-based art. In fact, the project was an outgrowth of the $5,000 Innovation Award unrestricted grant she received for her 2012 “You Are Here Toledo” public art installation for AIGA and the Arts Commission, one of several large public projects she was undertaken with her students over the years.

An AIGA board member and co-president with fellow graphic design faculty member Amy Fidler, Stucker decided after much thought to use the grant to design a project based on the Arts Commission’s 2015 strategic plan to focus on arts and culture in eight under-resourced Toledo neighborhoods.

“These neighborhoods have a great history but they’ve often been overlooked,” Stucker said. “I like the idea of pulling up a chair and inviting someone to share their story with someone else, and having community members themselves tell the stories brings a greater investment. But I also didn’t want people talking to themselves, so when we rotated the displays this summer, for two weeks at a time, we had a story or two from the neighborhood among the 10 chairs but the rest were from other neighborhoods.

“I’m not interested in students making designs for no reason, and I thought this would be a valuable experience for them as well as the neighborhoods.”

The chairs were displayed at the National Museum of the great Lakes, the Collingwood Arts Center, the Ohio Theater on the East Side, the Sofia Quintero Art and Cultural Center, SEED co-working site in the Warehouse District, the Frederick Douglass Community Center on Dorr Street and the Toledo Public Library main branch. Also, the team shared a chair a day throughout the summer on social media.

At the Sept. 24 closing celebration, all 100 were on display in the Glass Pavilion at the Toledo Museum of Art. Seeing them ranged around the circular pavilion was “awesome, it was so cool,” said BGSU student artist Benjie Wilhelm, a senior from Bowling Green majoring in graphic design. “It was almost overwhelming, seeing them all together” — a sentiment echoed by Stucker.

The process of creating his chair had a strong impact on Wilhelm. His chair design is based on a story by Bethany Collier, who spoke of a church retreat.

“What moved me about Bethany’s story was that she didn’t even realize what was happening as she was telling it, but she kept saying, ‘I’m not strong own my own but I’m strong together with others.’ It was an amazing story of sisterhood and empowerment. There was a gestation period where I listened to it over and over absorbing the content and then I took the words she used, like ‘love’ and ‘gathered’ and ‘comfort,’ and created typographic glyphs of the individual letters. I arranged them like mandalas using Eastern colors related to meditation and reflection. I’m honored to represent her story and thankful to be included in this project.”

Student artist Kate Blankerts created a chair design based on a story from Ida Cardenas, who spoke about the importance of learning sign language. Describing her “Communicate” chair, Blankerts said, “Sign language is a very beautiful form of communication so capturing the fluidity and motion each sign represents was important.”

Cardenas is married to BGSU faculty member Jose Cardenas, whose students handled the audio recordings of the community members. Also important collaborators on the “Sit and Tell” were Margaret Lockwood Lass, digital arts, and Barbara Bergstrom, art education. Faculty and students are creating a video about “Sit&Tell.”

“Sometimes we designers can get into designing just for other designers and not for ordinary people,” Wilhelm said, “but I think we all get the most satisfaction out of designing ‘for good,’ in a way that anyone can approach. This project represented that for me.”