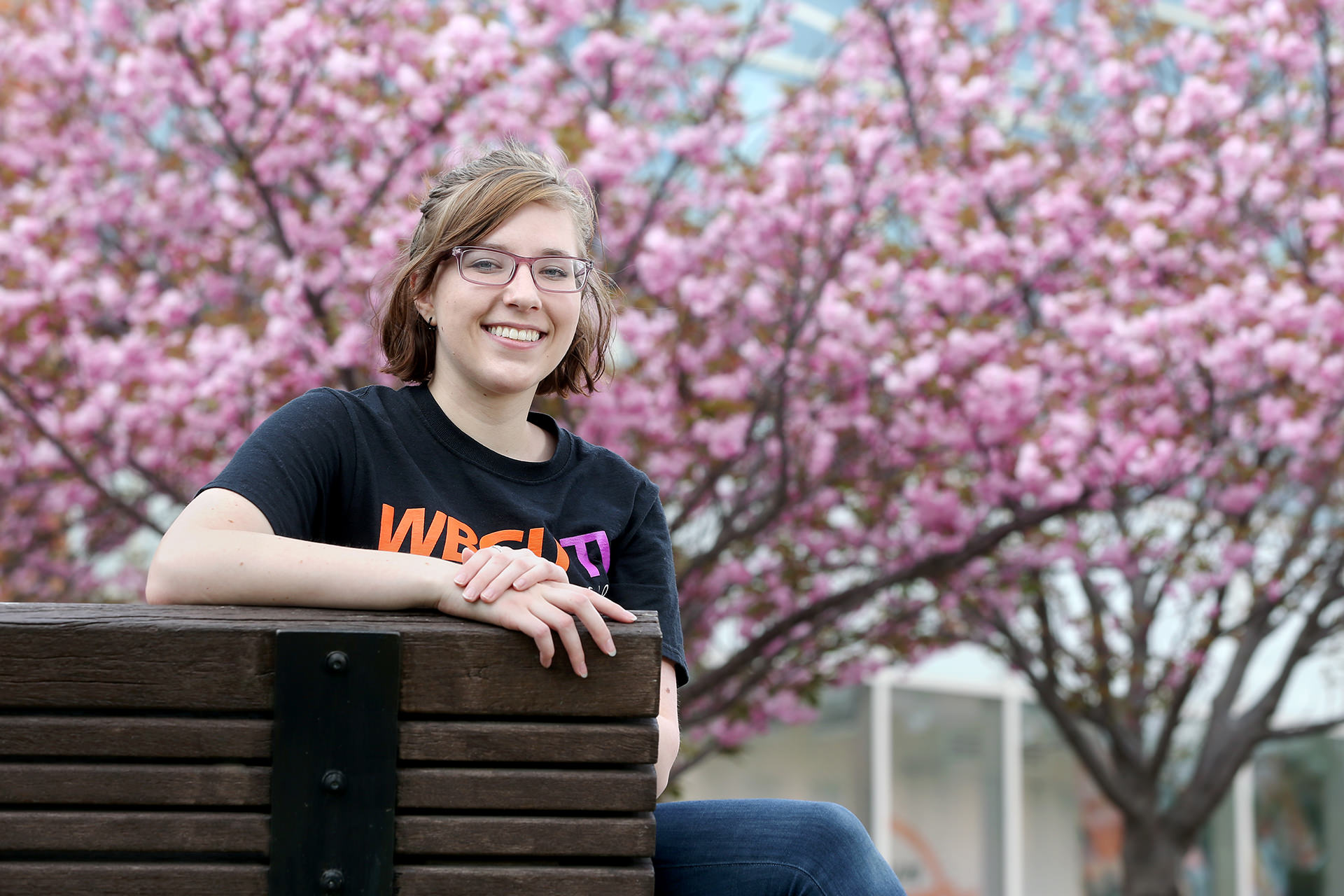 Meghan Murray is backpacking across Europe. She is rewarding herself for all of the hard work that went into achieving a 4.0 grade point average.

“The first thing I did was call my mom. She was so proud of me,” said Murray, who grew up in Medina, Ohio, southwest of Cleveland.

“Now, it feels like I worked so hard all these four years and finally everything is paying off. I’m getting recognition, and it feels really special. This award is one more thing to make me stand out at BGSU. And that’s something I’ve strived for, standing out from the crowd.”

Murray is a third-generation Falcon. Her parents, Heather (Spangenberger) Murray and Tom Murray, are Falcon Flames, and her grandfather Henry (Hank) Spangenberger also is an alumnus. She majored in visual communication technology (VCT) in the College of Technology, Architecture, and Applied Engineering and minored in film.

As part of the VCT program, students are required to take three co-ops, which integrate classroom study with work experiences. After her freshman year, Murray performed her first co-op at Textbook Painting, a student painting company in Lakewood, Ohio, where she did all of its training and promotional videos. Her other two co-ops were at WBGU-TV.

Murray started off at WBGU as a production student and did some sports and studio work. For her second co-op at the station, she was the editor the national PBS program “The American Woodshop.”

“I spent the whole last semester editing ‘The American Workshop’ and working with Scott Phillips and all of the national people on the crew,” Murray said. “Overall, you get a lot of experience with the co-ops, and really the only way you can get experience is hands-on in the field working with professionals. I think it’s really awesome that the VCT program helps us stand out among all the other majors and programs across the country.”

Murray also got to help make the Emmy Award-nominated documentary “Addiction: Heroin and Pills,” which raised awareness and provided resources for opiate abuse and addiction, with former adjunct instructor Marcus Harrison. Murray shot some of the film and helped with the editing.

“By working at WBGU-TV I really got to see the impact my work made on the community – all the people who are watching our shows and seeing our events and documentaries,” she said. “It was really cool as a student to work on something that big that had a profound impact on the community.

Originally, Murray considered being a film major, but during a campus visit in high school, she toured the television station and talked to some professors in the VCT program — some of whom taught her mother, also a VCT major — and was convinced she had found her collegiate path.

“I thought, ‘Hey, this is what I want to do, this is perfect for me,’” she said. “It just kind of happened that I followed my mom’s footsteps and took the exact same major, even though it’s totally different today than it was back then with all of the digital aspects — but it just kind of fell into place perfectly.”

Once she arrived on campus, her work ethic took over.

“The drive to get a 4.0 is just instilled in me,” Murray said. “I just want to be the best I can at everything and just put my all into whatever I do, whether it’s school or work or extra curricular activities. In some of the classes, you’re really pushed to be the best and they’re really challenging, but once you achieve an ‘A’ in that class it’s really a sense of accomplishment.

“I think having a 4.0 really gives me that sense of accomplishment that I really made an impact here at BGSU.”

Murray was the treasurer of the Visual Communication Technology Organization (VCTO) her sophomore year and the president as a junior. As president, she ran VCTO and organized meetings and planned events on campus.

“It was a really great leadership experience,” she said. “I think I’m a natural-born leader, even if I’m more introverted or more shy in my demeanor. I really thrive in leadership positions, especially if it’s something I’m passionate about.”

After Murray returns from Europe, she plans on landing a job in television production in the Toledo area because “northwest Ohio is my new home.”

“The University and I just clicked and I felt really at home here,” she said. “I really like how supportive the community is and all of my teachers, all the faculty, whether it’s the Learning Commons or the Counseling Center, everybody wants to help you succeed. This place just felt like home and it exceeded my expectations.”