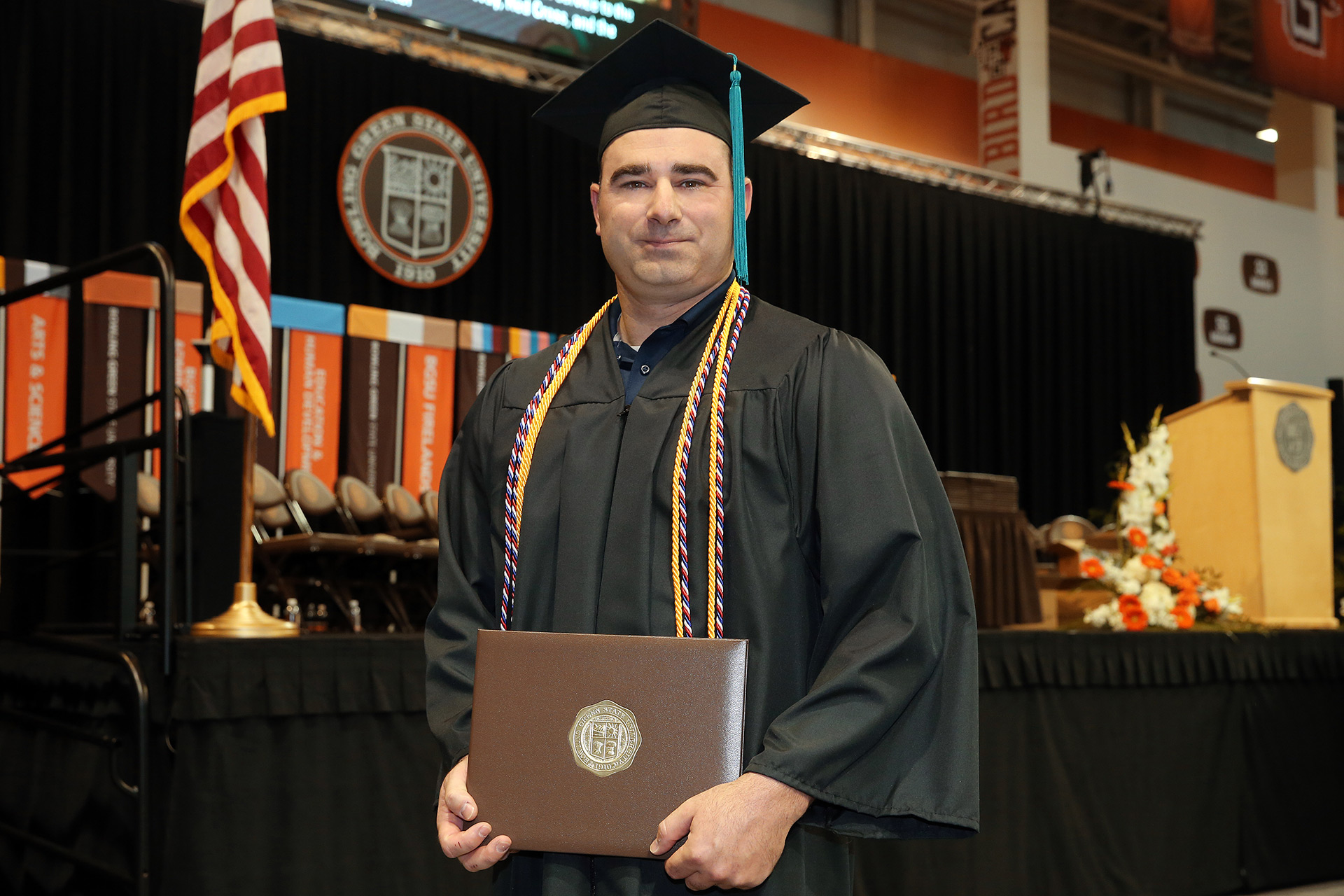 When Charles Swank walked across the platform at Bowling Green State University’s May 2017 commencement, he knew he was prepared for the next steps in his firefighting career.

“My father, who was a lieutenant for the fire department, died in the line of duty in 2002,” Swank said.

“His death during that fire call has molded me and my brother into the firefighters that we are today. His death on the fire call that day was not the outcome we expected, but it gave us more purpose in our careers.”

A previous event during his senior year gave him a different purpose. He was one of the captains of the high school football team, on his way to being named an MVP and considering college football opportunities when the 9/11 terrorist attacks occurred.

“It was on that day that I decided the direction I would take after graduation, he recalled. “I returned home to tell my mother that I was going to the recruiter’s office to start my enlistment into the U.S. Army.”

“This may have seemed heroic to some, but seemed only natural to me because of my upbringing,” because military service also ran in the family, he explained.

His father had served in Vietnam and his brothers serve in the Air Force and Army reserves.

From 2003 to 2004 he was deployed to Iraq in the initial push of Operation Iraqi Freedom. In 2005 he was deployed to Afghanistan. As an infantryman, his job was to patrol and do search and seizures. “I knew what the job was, but nothing really prepares you for that experience,” he said, “but it also gave me more appreciation for what veterans in previous wars have done.”

He completed his military service in 2006, but not before earning a Bronze Star with v-device for valor, which he earned for subjecting himself to enemy fire to help a colleague who had been injured. As the youngest soldier in his unit to receive such an award, he soon attained the rank of sergeant and attended a leadership development course.

“Despite my success as a soldier I knew my calling was to be a firefighter,” Swank said.

He returned home and immediately started fire training at Columbus State Community College to earn an applied associate degree in EMS/Fire Science. During that time he also had been hired as a full-time firefighter for the Mount Vernon Fire Department and was building a family with his wife, Alaina.

“As a firefighter I strive to improve myself on a daily basis through training and study. As a father and husband I strive to balance a passion and drive for the fire service with a deep love for my family,” he said. “It proves to be difficult at times but I have surrounded myself with some fantastic mentors who are showing me that it can be done.”

He came to enroll in the BGSU Fire Administration Program in 2015 after he learned about the online format, which was more flexible for his demanding work and family schedule. With five children, including a set of twins, all ranging from 4 to 10 at the time he enrolled, he needed a program that allowed him to work and devote time to his family.  He heard about the program from his Washington Township Fire Department colleague Captain Adam Smith, who was enrolled in the program at that time.

“He had good things to say about it; how it was all online, and extremely convenient,” Swank said. “I started full time in the fall of 2015.

“How did I do it?  Lots of late nights, sacrificing my time, but I still managed to help coach my kids’ ball teams.”

In addition to the convenience of doing classwork at night, BGSU’s program offered classes relevant to leadership positions in fire departments. He could have taken other public administration degree programs, “but BGSU’s program focuses on the things are specific to fire officer administration,” he said. “It gave me an introduction into legal issues, case law and administration in the world of firefighting.

“A degree is required to make captain at my department, so I wanted to be ready for the future. I know I am set up for success,” he said.

“Charles approached the fire administration degree with the same passion and integrity that he displayed in his military career, and in every aspect of his life,” said Ann Light, director and academic advisor of the fire administration program. “We are a stronger and better program for having students like Charles, and it was my honor to work with him.”