On November 9, 2016, 10 people were sworn-in as U.S. citizens during a ceremony in the Bowen-Thompson Student Union at Bowling Green State University. The Honorable James R. Knepp II, a BGSU alumnus, officiated the ceremony.

BGSU holds a special place in the heart of one of these new citizens. Morgan Lee ’15 received both his bachelor’s and master’s degrees in economics from BGSU. His first stop in the United States from the People’s Republic of China was Bowling Green back in 2010. 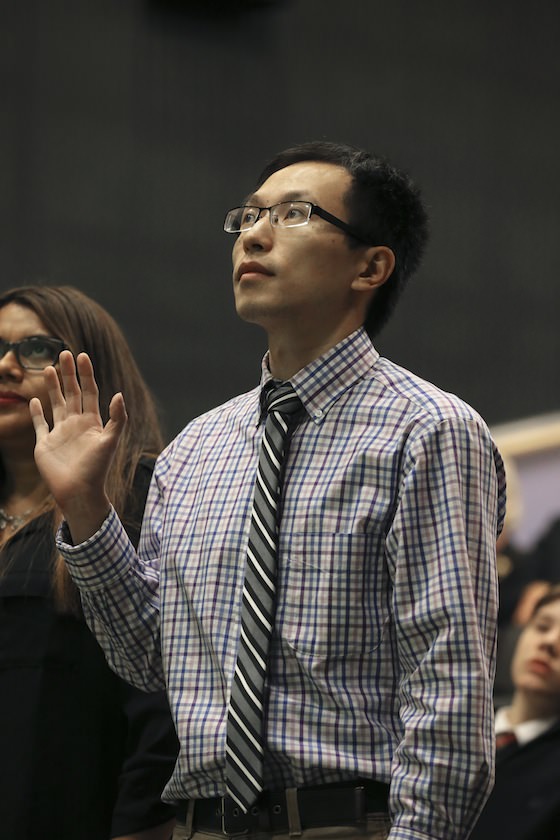 “I was a Falcon before I became a citizen,” Lee said.

Lee also changed his name from Muzi Li to Morgan Lee. The name Morgan was chosen because he works in the banking industry.  “I’m a banker, so I took the name from J.P. Morgan,” he  said.

Lee is the only person from his family who is here in the United States; and he hopes they, too, can become U.S. citizens.

“My dad always had the American dream to be in the United States and experience freedom of religion and freedom of speech,” Lee said. “Now I’m here before him, and I’m hoping his dream will one day come true.”

The other countries represented at the ceremony were: Vietnam, Pakistan, Lebanon, Jordan, Canada, Nicaragua and Germany.