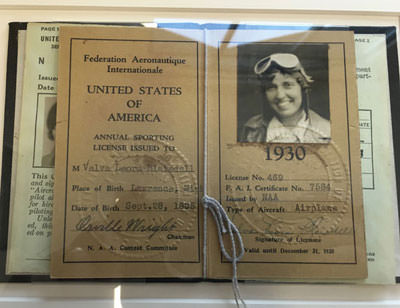 They include a “family-like environment,” small class sizes, a brand new fleet of aircraft, an on-campus airport and a family connection to Amelia Earhart.

Blaisdell’s great-great aunt Velva Blaisdell was friends with Earhart, and his family has the correspondence to prove it.

“My aunt’s artifacts have been passed down through my dad’s side of my family,” said Blaisdell, an aviation studies sophomore. “I’ve always had a passion for aviation, so it’s a big reason why I am in flight school now at BGSU.”

The BG Flight Center is displaying one of the letters from Earhart, as well as Velva Blaisdell’s recreational pilot’s license from 1930, until the end of spring 2017. The license is signed by no other than Orville Wright, who was the chairman of the National Aviation Authority, the predecessor of the Federal Aviation Administration.

On Amelia Earhart letterhead dated March 14, 1936, the legendary pilot who disappeared in the South Pacific in 1937, sent her greetings to Kalamazoo, Mich.:

Dear Miss Blaisdell: Your pleasant letter of months has waited here in a disgraceful pile for a tardy answer. I have been travelling so much that I have become the world’s worst correspondent.

Through research, the Blaisdell family, which resides in Sylvania, Ohio, found out that their ancestor went to flight school around the same time as Earhart. 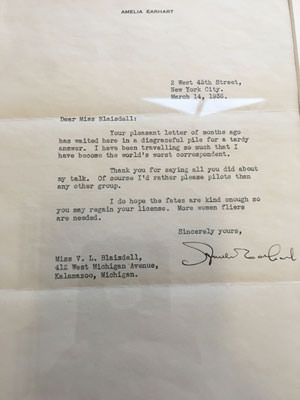 “That’s how they became friends,” Blaisdell said. “They had written to each other as correspondents for years and years, and we have tons of letters and pictures and stuff between the two of them. The one on display we thought was slightly comical, so we had it framed because of the content.”

Blaisdell wanted to be a pilot ever since he was 4 years old.

“I wouldn’t say it was just because of my aunt,” he said. “I’d see a plane flying overhead and I’d just about break my neck staring up at it. I always wanted to be the guy up there flying the plane.”

“Columbus and OSU were too big, and they won’t let you fly a plane until you have been a student for a year,” he said. “At BGSU, you get in a plane the first week, and that’s what sold me. We move faster here, which is a big selling point.”

Because they’ve kept the priceless artifacts in the family, Blaisdell said they don’t get the attention they deserve. However, he thought a display at the BG Flight Center would a nice place to land for the time being.

“It’s a rare piece of aviation history that you normally wouldn’t see outside of a museum,” he said. “I thought everybody at the Flight Center would appreciate it, and it might be something they would like to see.”

As far as career aspirations go, Blaisdell said it’s a good time to be in aviation school because there is a shortage of commercial pilots.

“Eventually, I’d like to get into corporate or cargo transport,” he said, “or work for the forestry service and be a water bomber pilot to help put out forest fires.”