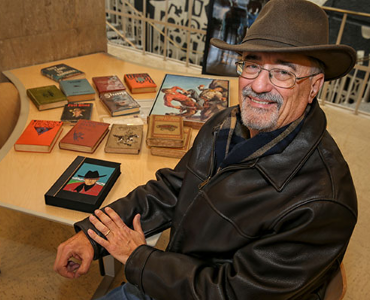 Hoppenstand recently donated a collection of crime, detective and horror fiction to The Ray and Pat Browne Library for Popular Culture Studies at BGSU. The collection, his third book donation to the University Libraries (UL), has been appraised at $140,000.

“Coming out of Bowling Green, I studied under the great Ray Browne at BGSU and his area of interest was not only in popular fiction and popular culture in general but crime and detective fiction,” said Hoppenstand, a Columbus native who earned his undergraduate degree at Ohio State University. “So, in a sense, I sort of emulated my mentor in terms of what I went into. Some of my first academic books were published through the Bowling Green State University Popular Press where Ray at that time was the director.”

“Dr. Gary Hoppenstand is a renowned scholar and professor,” said Sara Bushong, dean of the University Libraries. “He has dedicated his professional career to the study of popular culture, and the BGSU Browne Popular Culture Library again has benefitted from Gary’s careful selection of materials that continue to set the BPCL apart from other popular culture collections.

“Dr. Hoppenstand’s gift is truly remarkable, and we are very grateful for his continued involvement with the University Libraries and his service as a member of the UL Leadership Council.”

Hoppenstand said there are a number of items that are unique in his most recent donation.

One notable inclusion is material from Elizabeth Daly, one of the most popular and famous American crime writers of the 1940s.

“I donated a very rare set of Daly’s books, including a complete set of leather-bound editions from her own family to the library,” Hoppenstand said.

In horror fiction, Hoppenstand donated a superb set of Shirley Jackson collectibles. Jackson is an American writer probably best known for her novel “The Haunting of Hill House” (1959) and short story “The Lottery” (1948).

“I donated not only a signed edition of Jackson’s but also a rare a contract that I had that she worked with for one of her books — so there were some papers that were involved in that donation,” Hoppenstand said.

Other books included in his gift had rare signatures of the authors.

“It really was the breadth of the donation — a lot of different titles and the rarity of the donations make it a one-of-a-kind collection,” he said. “Basically, I’ve cleaned out my library that I’ve used for my own research and my own work.

“I just wanted to make sure that it went to BGSU rather than any other place because I’ve felt a real attachment to Bowling Green. I wanted the material to go to a place that would do a good job of taking care of it and having it available as a resource for many other scholars who research in the field.

Hoppenstand said it is bittersweet parting with his collection. He takes solace, however, in knowing that the donated material will be at home in such a highly regarded library.

“Bowling Green has won the prestigious Raven Award from the Mystery Writers of America for its crime and detective fiction collection, so it’s the best place in the world to donate that kind of material, and also because of my special relationship with the University.

“At some point the collection was going to be dispersed. God forbid, knock on wood, when I pass away, who knows what would have happened to it? This way, I know it’s been directed to a good repository and I’m happy it’s gone to a good home. That sort of offsets the separation anxiety in terms of donating the collection. I know it’s in good hands and I can go look at it if I want to.”