An infusion of green

Bowling Green State University is becoming “greener” all the time, thanks in part to the Student Green Initiatives Fund. Look around campus this fall and you will see examples of what the student-founded and directed effort has achieved. Launched in 2011, the fund collects a $5 fee per semester from students and then directs the money toward sustainability projects proposed by students and other campus constituents. “Green Ideas” are voted on by a committee primarily composed of undergraduates, plus a graduate student, faculty and administrative staff representative.

Even though they may opt out of contributing, most students choose to support the fund. In fiscal year 2016, a remarkable 88.8 percent of the overall student body contributed, said Dr. Nicholas Hennessy, campus sustainability coordinator. “This spring we had 93.5 percent of students participate, the absolute highest ever for a single semester,” he said.

“Educating people is our main goal,” he said. As the student founders expressed in the mission statement, the fund is aimed at bringing a “sense of environmental responsibility and literacy,” in addition to building BGSU’s reputation as a “leader and role model among institutions of higher education in the area of environmental sustainability.”

“A big part of our mission is shaping expectations across campus, and creating a new norm for sustainability,” said Joshua Chamberland, sustainability intern in the Office of Campus Operations and secretary to the Green Fund committee. For example, he said, a highly student-driven pilot project aims to reduce the number of plastic bags on campus. Plastic bag recycling stations have been ordered with funding from the Green Fund and will be placed in the Union and Falcon Heights Residence Hall. Student organizations will be responsible for emptying the stations and taking the bags to Walmart, which has agreed to partner with BGSU on the initiative.

But in the meantime, even before the stations are delivered, the students worked last year with Dining Services to assist by implementing an “ask-only” policy for plastic bags. “This complements the recycling stations and also heightens consciousness,” Chamberland said. “It’s not just about things we can buy, but about creating a culture of sustainability on campus. The Green Fund and the committee as a whole try to weave behavioral change into our projects. We can buy things, but if you don’t create awareness you haven’t changed behavior.” 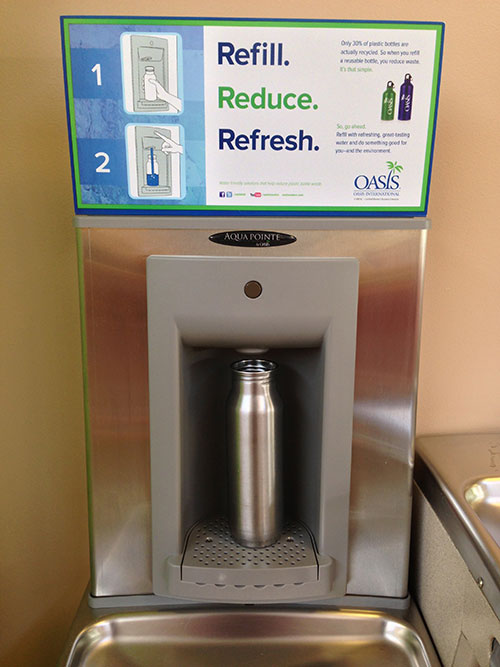 This began when some students wrote a Green Fund proposal for a couple of stations, Chamberland said. They turned out to be so popular that other facilities purchased them for themselves and retrofitted their water fountains. “It becomes something people expect to see,” Chamberland said.

Raising awareness of sustainability begins early. Incoming students for this fall got the chance to test their sustainability knowledge and possibly win a solar-powered backpack during their SOAR (Student Orientation and Registration) visits. Sponsored by the Department of the Environment and Sustainability in partnership with the Office of Campus Sustainability, the quiz was created by students in an environmental sustainability class to engage students with low-impact living. The Green Fund purchased the backpack, which can charge cell phones and other devices through its solar-powered battery, plus a number of smaller prizes.

On a larger scale, this year BGSU became the first public university in the state to have a hybrid box truck, which it uses to collect its recycling and appears at every “green tailgating’ football game. The Green Fund partnered with Campus Operations to purchase the truck in order to reduce the carbon footprint of the University’s recycling program, contributing the difference in cost between a standard vehicle and a hybrid model.

“The Green Fund eases some of the purchasing constraints and allows us to choose the sustainable option,” Chamberland said.

“Probably the most important role the fund serves is as a springboard for actually implementing the Climate Action Plan,” Chamberland said. “It’s a first step in presenting funding and helping to find partners and begin collaborations.”

Other “Green Funded “initiatives are also widely visible, such as the specially labeled “Landfill” and “Recycling” containers in the Bowen-Thompson Student Union and around campus that make it easier for users to sort their waste products and that leave no doubt where the waste is going.

The new Michael & Sara Kuhlin Center, along with having water bottle filling stations, is beautified with help from the Green Fund, which helped pay for native plantings in place of traditional landscaping. The beds were built using nutrient-rich, organic soil. Their sustainable grasses and shrubs were all purchased in Ohio and require no additional irrigation or supplemental fertilization, saving University and environmental resources. The University Architect’s office and landscape architects MKSK, who also created BGSU’s green bike shelters, designed the plantings on the north and south sides of the former South Hall.

Money was allocated last year by the Green Fund for pre-consumer composting of food waste from The Oaks, the Falcon’s Nest and Carillon Place dining centers. This type of composting tripled last year, Hennessy said. The compostable waste goes to Hirzel Farms in Pemberville, reducing pressure on area landfills as well as the amount BGSU pays to use them.

The swimming pools area in the Student Recreation Center will become brighter and more energy efficient with help from the fund, which will pay up to 50 percent of the cost of an LED lighting upgrade. The LED lights will reduce the amount of coal burned to produce electricity and thus BGSU’s emissions (for an annual carbon dioxide reduction of 99.1 metric tons), while saving additional money on electricity costs. The LED lights yield an annual energy savings of 143,761 kilowatt hours — another important step toward carbon neutrality.

The University has completed a greenhouse gas inventory, and the Green Fund is partnering with Campus Operations and contributing half the cost of a Campus Renewable Energy and Sustainability Study by engineering firm SHP Design, working with CMTA Consulting Group.

“This is pretty exciting because it will give us an actionable list of items that can be chipped away at toward carbon neutrality,” Chamberland said. “I’m excited to get it and consider which pieces we can fund.”

The report, which is in the final stages, will also provide guidance in policymaking, Hennessy said, adding that last year the committee expressed interest in a campus-wide solar energy project and looks forward to receiving proposals for a project related to renewable energy.

The Green Fund committee is very willing to help students complete applications for funding for their “Green Ideas,” said Chamberland, who was a committee member his sophomore through senior years. “They really enjoy helping complete and finalize proposals. We have the experts, resources and the experience. It’s an invaluable learning experience for students to write a grant, so we encourage everyone to complete the application to the best of their ability and we’ll help finish it.”

The fund was conceived in 2008 by environmental science major Jazmine Bennett and presented as part of a 2009 independent study with Dr. Holly Myers, recalled Dr. Enrique Gomezdelcampo, chair of the Department of the Environment and Sustainability. Bennett, a member of the Environmental Action Group for which Myers was the faculty adviser, collaborated with EAG; Undergraduate Student Government Senator John Dinan; Daniel Jacoby, undergraduate representative to the BGSU Board of Trustees; and then-interim sustainability coordinator Hennessy to gather signatures, share information and gain board approval for the fund. The idea was quickly accepted and the fee went into effect. Today, Myers is the faculty representative on the Green Fund committee.

As the list of 2015 accomplishes shows, that original “Green Idea” has proved fertile ground for campus sustainability.