The Power of Sports

Yannick Kluch finds home at BGSU, founds We Are One Team

Nothing. That’s what Yannick Kluch knew about Bowling Green before moving here from Hamburg, Germany, in 2012. He only knew a little more about Ohio – that it was important during presidential elections and home to Cedar Point – but that didn’t stop him from making the 4,100-mile-trip sight unseen.

“I knew I wanted to go to the United States,” Kluch said. “As I searched for media and cultural studies programs, popular culture and BGSU came up, so I applied, got funded and came here.”

Kluch, who has an undergraduate degree in marketing and public relations from the University of Mittweida, received his master’s degree in popular culture from BGSU in 2014 and is now working on his doctorate in media and communication.

“I thought living in small-town Ohio would be a nightmare,” he said “But literally from the first day, I knew this was going to be my new home; I loved it. Coming here was the best decision of my life.”

Kluch continued on to the doctoral program because he felt there was still more for him to learn at BGSU.

“Everyone has been really nice from the first time I emailed them,” he said. “I’m getting to know real, small-town America.

“I always thought I was a city person, but I’m not. It’s so nice here. I’m not one of many faces; I have opportunities here I wouldn’t have anywhere else.”

After receiving his master’s degree, Kluch thought he would get a second master’s degree in media and communication, but found that he did like research and teaching, so he transferred to the doctoral program after one semester. He is now a teaching assistant for communication theory and assistant basic course director for COMM 1020: Introduction to Public Speaking. He said he loves the new Michael & Sara Kuhlin Center, which is the new home of the School of Media and Communication.

“This building is awesome; I love coming here,” he said. “From a professional perspective, the research space is awesome.”

“Sport is a microcosm of society,” he said. “Few programs look at how to use sports to address social change, but the universal appeal of sports, especially in American culture, makes it a powerful way to promote social change.

“Change is happening in society, it’s just really slow. I hope we can use sports to make it faster.” 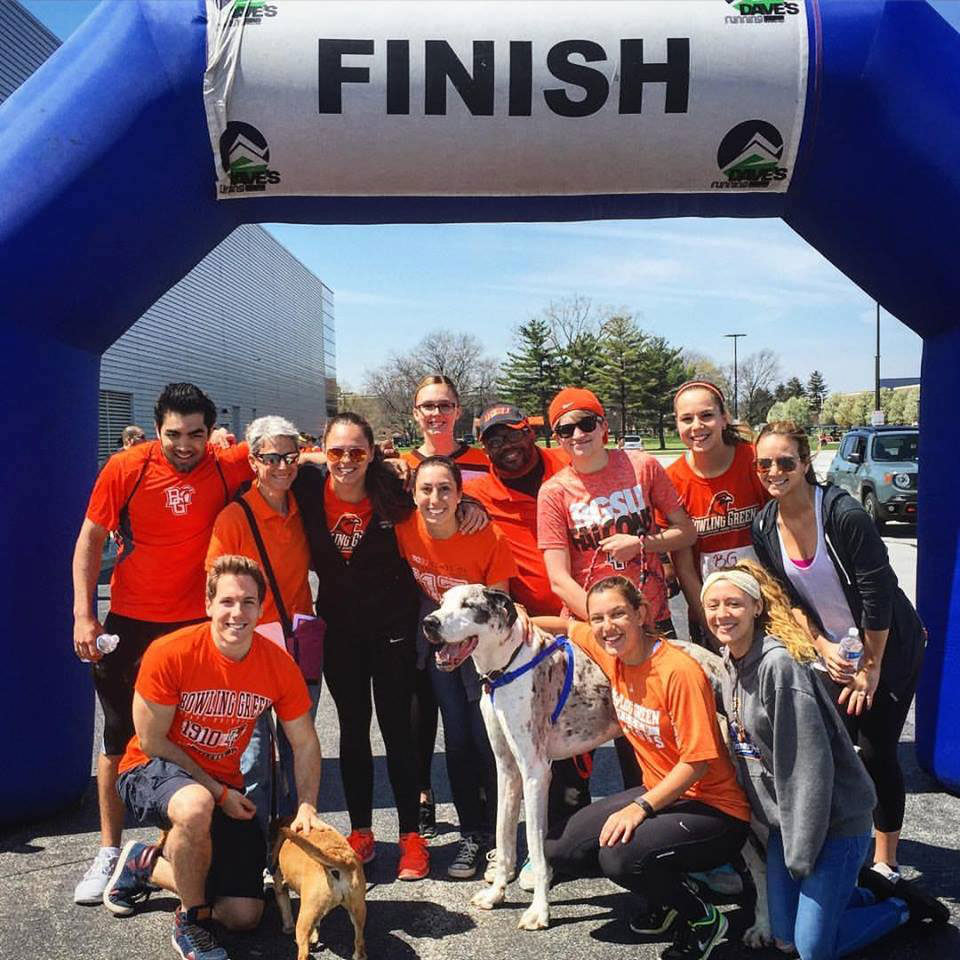 In that spirit, Kluch founded We Are One Team (WA1T), which uses sports to promote social change. This campus-wide initiative has organized educational events, including speakers and panel discussions; a Sporting Day series, which connects international students with athletes; and a photo campaign that features BGSU and Bowling Green community members who support efforts to promote social justice through sport at BGSU. We Are One Team also held its first WA1T 5K Run/Walk to promote social justice through sport this past spring, attracting more than 200 BGSU and Bowling Green community members.

“It’s a lot of work, but a lot of fun,” he said. “There is nothing like this in the United States. I firmly believe that sports can bring people together and unite individuals with diverse backgrounds.”

We Are One Team will celebrate its one-year anniversary at Campus Fest on Thursday (Sept. 1). The organization’s leadership board comprises members from 17 University offices, departments, schools and organizations.

“Our team of people is passionate about the potential of sports to break down stereotypes and create an environment of tolerance and inclusion,” Kluch said. “There are good social justice programs here on campus, but we’re trying to reach a bigger mass. Sports is a starting point for important conversations on issues of social justice. We want to reach students, faculty members, staff and, of course, our student-athletes.”

BGSU Assistant Athletic Director for Academics and Student Services Chet Hesson serves on the WA1T leadership board. “Yannick’s efforts with We Are One Team to enhance the BGSU campus culture of social justice through sport has reached so many people,” he said. “The attendance at events such as Sporting Days, where international students get to learn about American sports, and at his workshops and presentations in classes on campus and to the broader BGSU campus community, has been overwhelming. Hundreds of people turned out for the WA1T 5K last year and the opening of the fall semester has seen a huge rise in potential membership and involvement as well.

“I look forward to seeing Yannick continue to grow the profile and connection with athletics to enhance our acceptance, understanding and tolerance of each other’s differences, and to find the beauty in all of our unique attributes.”

Kluch saw the power of sports as a new student.

“I didn’t know anyone when I moved here,” he said. “I was so different, but sports was my connection. I made my first friend at the Rec Center. I still remember the cheering at my first football game. It was powerful.”

Kluch said that while sports are also popular in Germany, it’s different. There are no competitive sports in high school or college, for example.

We Are One Team had its first meeting of the fall semester, with its biggest turnout to date, in mid-August. Kluch will once again be president this year and is working to create an infrastructure that will last after he graduates.

“We recently created 10 new leadership positions, including community outreach, fundraising, marketing and recruitment,” he said. “This was never meant to be just a one-year thing; sustainability is a big part of my job this year.”

Kluch also wants to create a framework that could be implemented at other universities, some of which have already reached out to him.

“I have a lot more to accomplish in my last two years here,” Kluch said. “We Are One Team has been the single-most rewarding experience of my time at BGSU. I love working with a diverse group of talented friends who all share my passion for making a positive change through the power of sports.”

In addition to We Are One Team, Kluch has been an international student ambassador for International Student Services, a member of the Committee for Changing Campus Culture, a member of the President’s Advisory Council for Diversity and Inclusion and a part of Women’s History Month.

“I am involved on campus to make BGSU even better,” Kluch said, adding advice for other students. “You are responsible for your experience; be active, be open-minded, use the opportunities and resources available to you. Get involved – get involved with We Are One Team – make friends, and give back.”