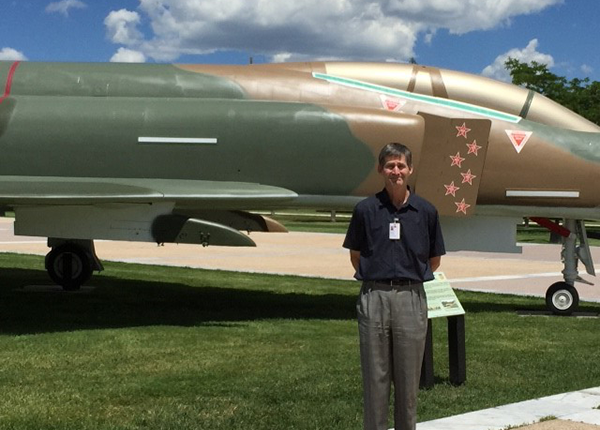 Dr. Earl McKinney took his faculty improvement leave (FIL) to new heights. McKinney, interim chair of BGSU’s Department of Accounting and Management of Information Systems (MIS), spent last year as a Distinguished Visiting Professor at his alma mater, the U.S. Air Force Academy. A former aircraft commander and instructor pilot in the military, McKinney used the opportunity to study how the Air Force uses drones and semi-autonomous robots and how it uses Big Data to make decisions and enhance coordination efforts.

At the Air Force Academy, McKinney taught MIS classes and a class that combined elements of organizational behavior and organizational theory to juniors and seniors. “Other activities included helping to initiate a plan to create a new MIS major, focusing attention on how to improve the management of the school’s network and infrastructure and mentoring junior faculty. I also had the chance to begin research projects on Big Data with academy faculty,” he said.

What McKinney hopes to bring back to the BGSU classroom is the application of drones and semi-autonomous robots to more common business applications “to see how robots and artificial intelligence (AI) are transforming the workplace.”

According to McKinney, “The military is a leading global adopter of drones and semi-autonomous robots. IT security is also a very essential element of their network, and I am able to apply what the academy has learned about securing a campus network to our IT security classes.”

Besides the knowledge he brings to the classroom, he also is interested in the application of Big Data to decision making. “The military is using Big Data to make decisions and improve coordination in a number of ways similar to businesses,” McKinney said. “I am now a part of several research initiatives that are investigating how Big Data is used in accounting for decision making and how to educate the next generation of business students to avoid simply accepting the results of Big Data analysis and to learn to ask good questions about Big Data analysis.”

One might wonder how an MIS professor can combine his scholarly expertise with his passion for aviation. McKinney explained, “One combination of flying and IT is drone technology. Having expertise in both technology and aviation, I am able to challenge students to think more completely about the advantages and disadvantages of employing drones for military uses, and the ethical implications of using drones against human targets.

“Military drones range from small, hand-launched reconnaissance systems to jet-sized airplanes that have intercontinental range. Opportunities for drone use are expected to take off rapidly in the business domain with recent legislative action clarifying the roles and responsibilities of drone operators.”

McKinney is most proud of his Air Force Academy work that helped improve its network and security infrastructure. “The academy is one of the most secure university networks in the world,” he said. “However, that security is expensive and consumes considerable bandwidth. The academy manages its network and security infrastructure like a common military base, but with several colleagues, we were able to help the leadership move in a direction of a more open university network while still maintaining security on particular applications where security is needed.”

He began his career at the academy as a pilot and earned a bachelor’s degree in economics. He received a master’s degree in engineering in operations research from Cornell University and a Ph.D. in MIS from the University of Texas. He joined the BGSU faculty in 2000, after serving nine years as a faculty member at the Air Force Academy.

McKinney, who also holds a commercial pilot’s license, sees three “next big things” in his field of study, the first being robots and AI. “The second is the Internet of Things—everything big enough to have a chip on it will have a chip and communicate with a network; and, third, virtual reality. It’s a fascinating time to be in the field.”

As Leonardo da Vinci said about flying, “Once you have tasted flight, you will forever walk the earth with your eyes turned skyward, for there you have been, and there you will always long to return.” That is certainly the case for McKinney, who continues to nurture a passion for flying, and brings the technology from the skies into the business classrooms at BGSU.