If his life were a book, chapters on Brilliant, Ohio, and Bowling Green would be essential in telling his tale.

Author Robin Yocum ’78 is thankful for his hometown of Brilliant and his alma mater, Bowling Green State University. Both have inspired and contributed to his career as an accomplished writer.

Yocum grew up in the heart of the industrialized Ohio River valley of Jefferson County and across from the banks of West Virginia’s northern panhandle. He came from steelworkers, coal miners and railroaders and was the first in his family afforded the opportunity to attend college.

“Where I came from, you didn’t go to college, you went to work. But my dad convinced me to get out of the steel mill and break that cycle, and I got that opportunity at Bowling Green. My time there was tremendous and I will forever be in BGSU’s debt." BGSU helped forge his career path, Yocum said, and for that he is forever thankful. After all, the northern Ohio River region wasn’t the notch on the Rust Belt that it is today. It took courage to leave the steel mills that employed the majority of the region in 1974.

“I was the first one out of my family to ever go to college,” said Yocum, who was a placekicker on the Falcons football team. “I am incredibly grateful and indebted to Bowling Green. I think that all of the good things that have happened to me over the years are a direct result of my time at BGSU.

“Where I came from, you didn’t go to college, you went to work. But my dad convinced me to get out of the steel mill and break that cycle, and I got that opportunity at Bowling Green. My time there was tremendous and I will forever be in BGSU’s debt."

Yocum majored in journalism at BGSU and worked as an award-winning reporter at the Columbus Dispatch from 1980 to 1991. He started out on the crime beat and later was the senior reporter on the newspaper’s investigative team.

His most recent novel, “A Brilliant Death,” was published by Seventh Street Books in the spring, and his hardscrabble hometown provided the backdrop for the gritty mystery. The inspiration for the book stems from a real-life missing person, who disappeared from the Columbus suburb Grandview Heights in 1946.

“She was a school teacher who walked out the door to catch a bus downtown one Saturday morning and disappeared from the face of the earth, never to be heard from again,” Yocum said.

He was always fascinated by that case and decided to write a missing-person mystery set in his hometown and give the Ohio River a starring role.

“When I was a kid growing up, I was terrified by the Ohio River,” he said. “My grandmother would tell me these horrifying stories of people drowning in the river and so I kind of combined those two ideas and created my story.” 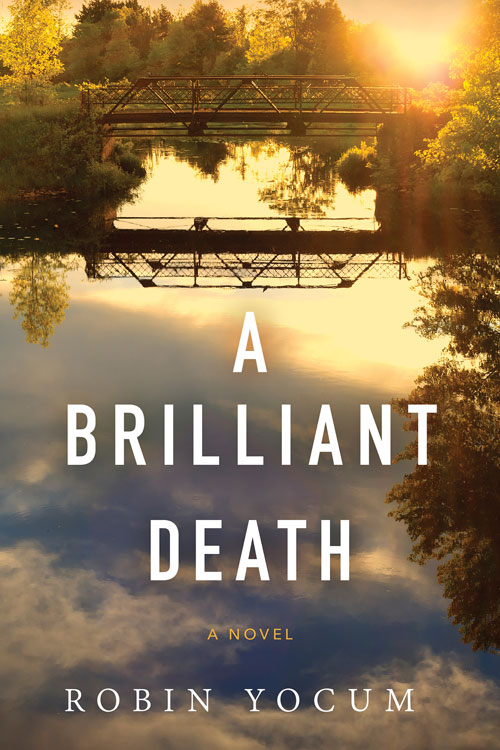 In “A Brilliant Death,” Travis Baron was just an infant when his mother was presumed dead after a boating accident on the river in 1953. When Travis is a teen, he yearns to learn more about her and enlists the help of his best friend, Mitch, in his search. Along the way, they encounter an unlikely ally, a disgraced former detective who has served time for falsifying evidence. The information he provides Travis and Mitch is both invaluable and potent as they piece together the puzzling story of how Amanda Baron died.

“She’s sort of the Amelia Earhart of Brilliant, Ohio,” Yocum said. “Did she drown? Did she get to shore? Nobody ever really knew for sure. In the process to find out what Travis’ mother was like it morphs into a murder investigation.”

Yocum had written about neighboring cities of his youth — Steubenville, Mingo Junction, Wheeling, W.Va. — in previous books, but he felt the time was right for Brilliant to take center stage.

“I love my hometown. It was such a great place to grow up,” he said. “I remember it fondly and I thought why not revisit the Brilliant of my youth? After I made the decision, I was really glad I did. I took some liberties with a little bit of the topography, but anyone who reads it would realize it’s my hometown. I talk about the (former) Brilliant Blue Devils and some of the schools and towns in the area. I had a lot of fun with setting the book in Brilliant.”

Yocum, a father of three grown children, is quick to credit his BGSU journalism degree and the University for helping establish his writing career.

“BGSU opened so many doors for me, and on top of that it was just a great place to spend four years,” he said. “I made lifelong friends and I still enjoy coming back for ballgames and hanging around campus. The campus has changed so much since I left, but I still get a kick out of coming back and wandering around and checking out the old haunts.

“To me, the changes on campus are astonishing, but we’re pushing 40 years since I graduated. A lot can happen in 40 years.”

Yocum has written two other novels, “Favorite Sons” (2011) and “The Essay” (2012). He also is the author of two nonfiction books, “Dead Before Deadline,” which chronicles his four years as a crime reporter, and “Insured for Murder” (1992), a true-crime book about a murder-for-insurance scam that he and co-author Catherine Candisky covered for the Dispatch. Currently, he is the president of Yocum Communications, a public relations and marketing firm in Westerville, Ohio.

For more information about “A Brilliant Death” and his other novels, visit Yocum’s website.