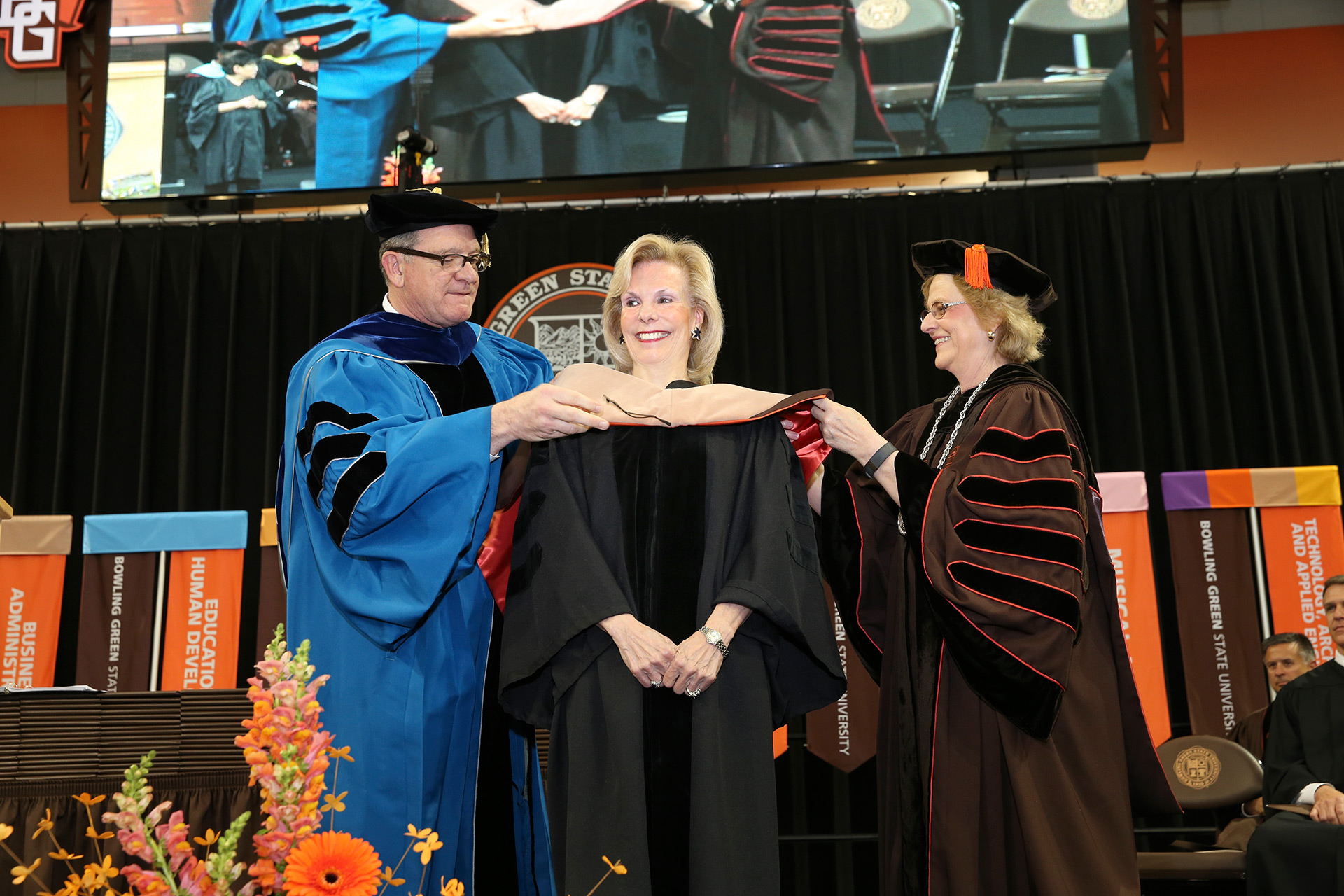 The sky is the limit

Maribeth Sembach Rahe’s childhood was anything but settled. She moved to a different city or attended a different school almost every year. Perhaps that’s why she learned early that she had to follow her own North Star in life to achieve success — something she urged the newly minted graduates at commencement May 7 to do as well.

In addition to her personal resolve, she also had the encouragement of her mother. “I was always a dreamer about what I could be,” Rahe, a 1970 alumna, told BGSU graduates. “My mother drilled into my head how fortunate I was that I could do anything I set out to do — as opposed to her generation when options were very limited for women.”

Rahe went on to prove her mother correct. Referred to as the first woman to shatter the “glass ceiling,” she has had a distinguished career in financial services and in 1997 was named as one of five top woman executives in the Fortune 500 by Forbes magazine. Vanity Fair in 1998 featured her as one of America’s most influential women.

In honor of her achievements, Bowling Green State University presented Rahe an honorary doctorate of business administration. Rahe has served since 2003 as chief executive officer and president of Fort Washington Investment Advisers, a wholly owned subsidiary of Western and Southern Financial Group, based in Cincinnati.

“I have had an incredible journey since starting on my career path here at Bowling Green State University in 1966,” she said.

Under Rahe’s leadership, Fort Washington is now the largest money manager of institutional resources in the Cincinnati region and employs more than 100 investment and support professionals.

Before joining Fort Washington, she was president and a board member of United States Trust Company of New York. She also served as vice chair of the board of The Harris Bank of Chicago and has held various positions at JP Morgan in London and New York.

“Throughout her career, she has made it a priority to exhibit strong and compassionate leadership, whether she is in the boardroom or in a community role,” said BGSU’s resolution granting her the honorary degree.

So how did a Spanish major from BGSU wind up in international banking? Accepting the award, Rahe told the graduates, “I owe a big thank you to Bowling Green for all my grounding.”

In addition to being a “dreamer,” she said, “I always wanted to speak another language, so I began studying Spanish in the eighth grade.”

She also always liked being involved with extracurricular activities, — “although education was always my top priority” — but because of her family’s constant moving, she was limited in what she could participate in, so she decided to pursue Spanish and hoped to study in Spain.

After graduating from high school in Chicago, she briefly enrolled in another Ohio college before realizing she could not achieve her goals there. “Then along came BGSU,” she said. She learned from a roommate of her sister’s, who was already at Bowling Green, that the University had a superb romance languages department, had a program at the University of Madrid, and would allow her to study abroad beginning sophomore year.

“Ah-ha! All my personal goals would be within reach,” Rahe remembered.

So Rahe enrolled at BGSU and went to Spain as a sophomore. It seems her leadership ability was already apparent because, upon her return, in her junior year she was elected president of her sorority as well as president of Mortar Board and to Student Council. She also had a minor in business, something she would come to call upon later in her career.

After graduation, she was offered a four-year fellowship at the Ohio State University to pursue a doctorate in romance languages and literature, for which she completed all the coursework.

However, much as she loved those disciplines, her internal homing device kicked in once again, and, she said, “I yearned for something different for my career. I stumbled on financial services and — to get the best of two worlds — combined my foreign language skills and obtained an MBA in international finance from Thunderbird School of Management to pursue a career in international banking.”

She did pursue that career and then moved into investments and later into management, proving highly successful at all three. The Vanity Fair article placed her among such prominent women as Supreme Court Associate Justices Ruth Bader Ginsburg and Sandra Day O’Connor, Secretary of State Madeleine Albright, and a number of congresswomen, governors, civic and business leaders and other professionals.

While at Thunderbird, Rahe met her husband, who has become a prominent international banker. “As a dual career couple, we always focused on being the best we could be — always performing at the highest level. It paid off,” she said, “because if you like what you do, it shows up in your work and your life.”

And if for some reason you don’t enjoy what you are doing, Rahe always says to quickly seek out another opportunity. But never burn bridges, she cautioned the graduates, pointing out that she had worked for two of her major employers twice each.

“Remember, it is only you who really knows what you are good at and what you like. Do not settle for something expedient or something that someone else thinks you should do.

Trust your instincts. You are the best author of your own future.”