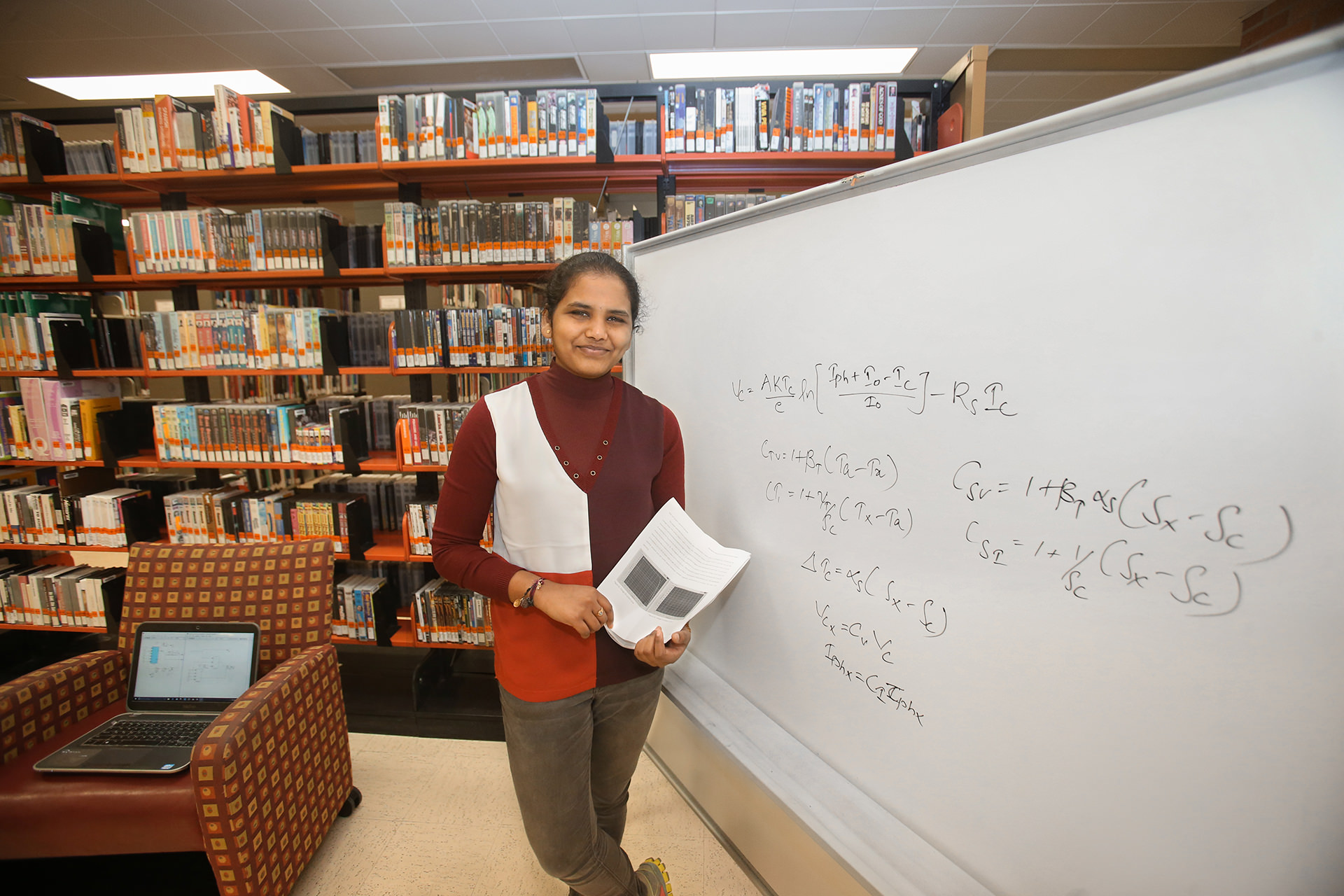 Feeling at home at BGSU

It was that same inquisitiveness that led Malkireddy to major in electronics and computer engineering technology. She graduated May 6 from the College of Technology, Architecture and Applied Engineering, but didn’t participate in commencement ceremonies because her parents aren’t able to travel to the United States until later this year. They will witness her achievement during December's commencement ceremonies.

“My family in Warangal (in the state of Telangana) didn’t have a phone until one of my uncles brought a cordless and other electronics from the United States,” said Malkireddy, who has been accepted into a master’s program at Kettering University in Michigan.

When Malkireddy, 22, was a child she had two uncles working in the United States. One uncle, Uma Reddy Katta, had a background in electronics and lived in Bowling Green, across from the University on Clough Street.

“He used to bring all of the new electronic stuff to India,” Malkireddy said. “We were so surprised by how the technology was developing in other countries. So, when I would ask him questions like how does it work, he would tell me to study electronics and electrical engineering.”

Malkireddy followed her uncle’s advice and when it came time to specialize in 11th and 12th grades, the equivalent of U.S. junior college, she studied mathematics, physics and chemistry. She then completed three years of electronics and communication engineering courses at Jawaharlal Nehru Technology University in India.

Malkireddy said her uncle, who worked for Cooper Tire and Rubber Co. in Findlay at the time, “found the University very calm and peaceful and wonderful for the students and he liked the program structure here and said, ‘Why don’t you come as a transfer student?’

“So, I sent my transcript and other documents, and the University gave me 60 hours of transfer hours and that’s how I came here.”

Malkireddy was surprised to see philosophy, psychology, ethnic studies and other classes as additional requirements when she arrived at BGSU, but she wasn’t upset.

“I thought it was so great, I will have knowledge in all of these different backgrounds,” she said.

Some of the classes even helped her adapt to living in the United States.

“When I was going to the pop culture classes, I didn’t know so many actors or sitcoms or anything about the advertising or marketing strategies here — it’s so different from India,” Malkireddy said. “It actually helped me to learn American culture and make friends easier in the class.”

She had to analyze commercials for her favorite shows, which included “How I Met Your Mother,” “The Secret Life of an American Teenager,” “White Collar” and “Friends.” The assignments helped improve her reading skills and essay writing.

“I used to be really bad in my GSW (General Studies Writing) and that is how the library became my favorite spot,” Malkireddy said. “I used to be in the tutoring and Learning Commons all the time. Whenever the GSW professor would assign a paper, the tutors were so helpful and patient. They used to help rephrase my sentences if they had mistakes in them. That’s how I completed my English courses successfully.”

A host family also helped Malkireddy with transitioning to living and studying at BGSU. Gretchen Avery, an associate librarian at Jerome Library, and her family would invite Malkireddy to holidays and other gatherings.

“They treated me like their kid,” she said. “They invited me to Christmas, Easter, Thanksgiving, everything. I got to learn even more about American culture. I never knew what Thanksgiving was, other than the Black Friday sales. They took me to see the fireworks on the Fourth of July, and stuff like that.”

Malkireddy completed internships in the electrical department at Whirlpool in Clyde, Ohio. She worked in different departments, including programming and CAD drawings, which proved to be valuable to her educational growth. She received the International Society of Automation (ISA) Toledo Section scholarship in 2014, and also participated in India Students Association cultural activities.

“The internships were very helpful,” she said. “They trained me to build things like electronic switches and how to program on the assembly lines.”

Malkireddy carpooled with a Whirlpool employee for a semester because she didn’t have her driver’s license. Coworkers helped her study for her license, and when she passed her test a friend let her borrow his car to drive to Clyde.

“She worked hard in two Electronics and Computer Engineering Technology (ECET) courses she took with me and received 'A' grades in both,” said Dr. Sri Kolla, professor in the Department of Engineering Technologies. “She participated during class discussions and worked well with other students in group laboratory activities.”

Malkireddy said she learned many skills while attending BGSU, but maybe the most important ones were being comfortable in the workplace and feeling like she belonged.

“The best skills I learned were how to find a job, how to talk to people, how to dress up and how to build my resume,” she said. “My professors were very happy that I got my internships here, which made me even more enthusiastic. When your professors are happy for you and they express it to you, it inspires me to work more and more toward my goals.”