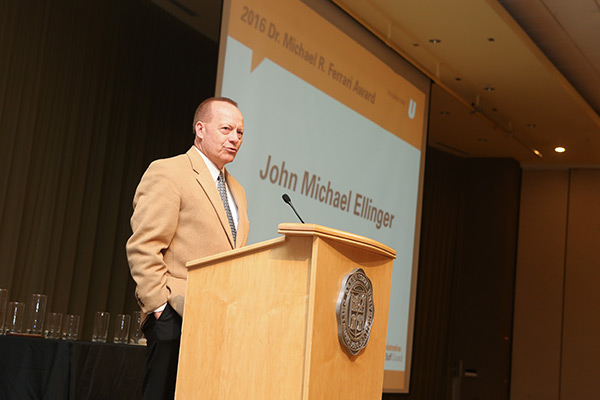 Information technology is such an integral part of University life today that when it doesn’t work, many find it nearly impossible to do their work. Keeping BGSU’s technology running, secure and up to date is the ultimate responsibility of Chief Technology Officer John Ellinger.

Ellinger was thanked for managing this daunting task as the recipient of the 2016 Michael R. Ferrari Award, the highest honor for administrative staff. Presented April 19 at the annual Administrative Staff Council Spring Reception, the award was accompanied by $1,000 and a reserved parking spot for one year. In addition, Ellinger’s name will be added to a commemorative plaque in the Jerome Library.

The Ferrari Award honors administrative staff for superlative performance, showing innovation and initiative, and having a strong relationship with the University community. Ellinger models all three characteristics.

“His meticulous nature, longstanding care about the broad educational mission of BGSU, and borderline obsession with consensus building at all stages make him ideally suited for the award,” wrote nominator Dr. Paul Cesarini, assistant vice provost for online and summer academic programs.

“Higher education technology administration is mostly a thankless task,” Cesarini said. “When the network is up and things are going well, few people if any will pat you on the back. When some virus or malware sweeps through campus, or some major project runs into implementation issues, you're often the first person to take the heat.

“IT is transparent and yet ubiquitous; everywhere and no where at the same time. Managing and making sense of it all on an ongoing basis — each day, each month, each year — is a challenge so monumentally daunting that I'm still mildly surprised John hasn't hopped in his car and sped away from campus as fast as he could go. Yet, he's here.”

Here, and continually pushing the envelope to improve BGSU’s information technology and adopt leading-edge systems that meet the campus’s needs, said his nominators. He has spearheaded such initiatives as Voice over IP phone systems, noted Sheri Kellogg, ITS director of applications. “BGSU was one of the first Ohio universities to embrace this technology,” she wrote. “This implementation not only moved the phone system from an analog system to a digital system, it also created a cost savings to the University due to the reduction of power and overall phone service costs.”

To keep everyone connected to the internet at all times, Ellinger supported the implementation of a redundant connection, ensuring there are adequate wireless access points in all classrooms. “BGSU has better than a 99% uptime with regards to the network, which is phenomenal in the IT industry,” Kellogg wrote.

He also is committed to making sure the University has the technology it needs for its innovative, active-learning classrooms, annually devoting part of his budget toward that end.

Every university’s technology needs are rising rapidly and there are never enough resources available to meet all the requests and needs, said nominator Sheri Stoll, chief financial officer.  “John has, even with limited resources, found creative ways to do more with less, whether it involves personnel, software or hardware. He has effectively led BGSU's efforts to implement a site for off-site data storage and disaster recovery — something critical to ensuring our ability to function if a disaster occurs.”

He is also concerned with other aspects of security and worked closely with BGSU Police Chief Monica Moll and members of Wood County and other surrounding emergency agencies to build out an emergency response plan, Kellogg added.

Ellinger is also known for his commitment to understanding his constituents’ needs. “John has worked very diligently to establish and to build solid relationships with academic and administrative leaders across campus,” Stoll said.” He works regularly with deans and colleges on their specific needs; and he has re-shaped and rebuilt the CIO's advisory committee into an effective tool for guiding and informing the technology priorities across campus. These relationships and efforts all contribute to his and his team's ability to perform their work as efficiently and effectively as possible.”

Students get equal consideration, Kellogg wrote. He meets with the new Undergraduate Student Government and Graduate Student Senate members to ensure the ITS department is supporting all the students' needs.

Despite the pressures inherent in his job and those he places upon himself, he maintains a cheerful, positive demeanor. “As a direct report to John, I find him to be an inspiring supervisor and leader,” Kellogg wrote. “He shows up to work each day with a smile on his face, he practices an open-door policy and regards each and every one of his 90-plus employees with respect. His motto is that he treats people as he wants to be treated. He is calm under pressure and is an excellent presenter. John has never met a stranger. I am proud to be part of his staff and only hope that I am able to lead my staff in the same manner in which he leads his own.”