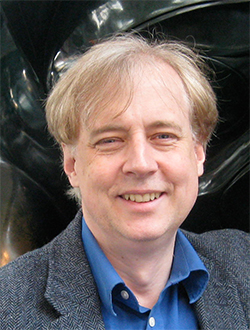 Events that shaped the world in the historical past have been inaccessible to experimental science, until now. Dr. Steven Benner, Distinguished Fellow for the Foundation of Applied Molecular Evolution, discusses his work in the 2016 Jean Pasakarnis-Buchanan Lecture on campus April 14.

Benner will present “Resurrecting Ancient Proteins from Extinct Life.” The event, which is free and open to the public, is scheduled for 7 p.m. in the Bowen-Thompson Student Union Theater.

The advancement of genomics and genetic engineering has enabled scientists to bring parts of ancient organisms back to life, Benner said. During his public talk, he will describe how this is done, what it tells us, how living systems adapt to environmental change, where Homo sapiens came from, and what it means to be human.

Benner also will present a scientific lecture April 15 in 112 Life Sciences Building. “Synthesizing Life from the Bottom Up” is the topic of his talk to BGSU students.

“Synthetic biologists seek to create molecules that reproduce the more complicated behaviors of living systems, including replication, adaptation and evolution,” Benner said. “The ultimate goal is to create — from the bottom up — ‘synthetic life,’ which is a grand challenge that cannot help but teach us about the intimate connection between chemical reactivity and the living state.” He will discuss recent results creating artificial genetic systems, where organic chemistry has delivered nonstandard DNA-like molecules that support replication, adaptation and evolution.

BGSU’s annual lecture series was created in 1998 by Jean Pasakarnis-Buchanan, who graduated from the University in 1952 and went on to a 33-year career as a cytologist with Massachusetts General Hospital. She also taught cytology, which is the study of human cells, at Northeastern University. Buchanan received the Alumni Community Award from BGSU in 1972, and in 1987, set up a scholarship for biology or medical technology majors. Her lectureship endowment allows the University to bring some of the leading figures in biology and medicine to campus each year.

For more information, contact the Department of Biological Sciences at 419-372-2332. Guests with disabilities are requested to indicate if they need special services, assistance or appropriate modifications to fully participate in the event by contacting Disability Services, access@bgsu.edu, 419-372-8495, prior to the event.