That same kind of dedication is needed off the field for current and former NFL players who want to transition into their next careers as members of the media.

Often the first step for players is the NFL Boot Camp: Sports Journalism and Radio, which was held April 14-17 at Bowling Green State University. There also is a broadcast boot camp in May at NFL Films in New Jersey.

“Between the two camps, the current and former players will get a chance to be exposed to working in the journalism field,” said Dick Maxwell, a media consultant with the NFL, at the Sebo Athletic Center. “Whether they’re retired or not, they’ll get a chance to see if they want to go into this area or even supplement their full-time career after they leave the NFL.” 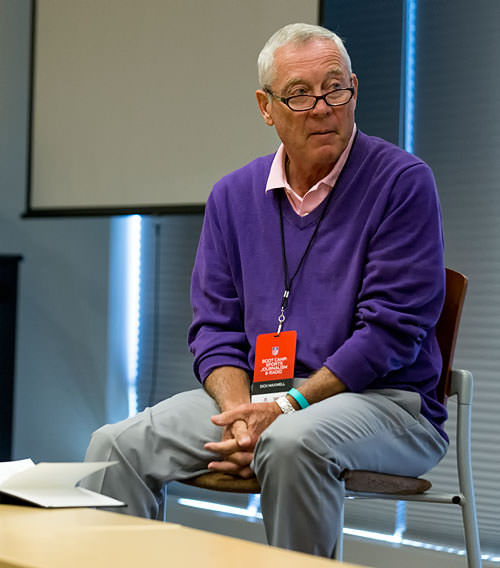 Dick Maxwell '70Maxwell, a 1970 alumnus of BGSU, worked for the NFL for 36 years, including 29 years in the league office, and was the NFL's senior director of broadcasting when he retired in 2006. He founded the Maxwell Center for Sports Media at BGSU to assist students in the sport management and media and communication programs.

This was the fourth year the University has hosted the boot camp, which offers an opportunity for athletes to strengthen their writing and on-air skills. They also picked up insightful feedback and mentoring from ESPN Radio and Westwood One as well as University faculty.

“The process for current and former players is they go through an application process through the NFL Player Engagement office, and they have to show some interest beyond just wanting to be part of the media,” Maxwell said. “This is really training them to go into journalism or local radio.

“The foundation for anything is writing, which is becoming a lost art. If they can gain an edge by being improved writers, that will give them an edge in the marketplace in selling their skills.”

One of the sessions at Sebo offered a chance to go through a faux press conference with BGSU Head Football Coach Mike Jinks and NFL Game Official Bob Waggoner. Players were critiqued after the sessions. From there, they had to write a radio spot, a column for print media and a blog.

Most important, Maxwell said he encourages the players to use their unique skill sets that other journalists don’t have: on-field experience.