A life of forging links for mutual success

Like the character of George Bailey in “It's a Wonderful Life,” Bruce Nyberg ’68 is a banker whose heart is not in accumulating wealth but in sharing wealth and building community. He is guided by Dr. Martin Luther King Jr.’s philosophy that “Everybody can be great because everybody can serve. Everyone can make a difference in someone’s life.” Nyberg has steadfastly applied himself to making a difference in many people’s lives. 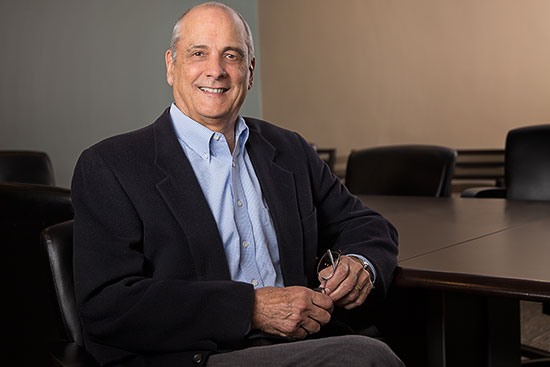 A Birmingham, Mich., resident, Nyberg supports his alma mater by serving as a national trustee for the University. National trustees are alumni who do not live in Ohio but who can advocate for higher education and are nationally prominent in their fields. Earlier, from 2003-09, he served on the BGSU Foundation Board, helping to guide the University’s investment strategy.

On the individual student level, in 2002 he created an education scholarship in honor of his wife’s career as a high school English teacher and mentor. The Bruce and Katherine Nyberg Award is designated for a rising junior or senior majoring in integrated language arts coursework leading to licensure to teach in grades 6-12, with preference given to applicants of high academic achievement whose home address is in one of five Michigan counties.

Nyberg can often be seen on campus, whether for board meetings or other events, his tall, lanky frame and easygoing manner belying the intensity of his commitment to caring for people through causes that include feeding the hungry and human rights. He sees an important role for education in preparing citizens to succeed together.

“I’m a big fan of public higher education as a democratizing influence on society,” Nyberg said. “Everybody comes together where you can live and thrive in a diverse environment and you begin to recognize the depth of our commonalities — the basic human desire for a stable and meaningful life.”

Since he was a student at BGSU earning dual degrees in business administration and history, and throughout a diverse banking career, Nyberg has taken an eclectic approach to life. His philosophy of challenging the status quo was something he learned from his history professors, he said, noting that Dr. Gary Hess, now Emeritus Distinguished Research Professor, was his favorite. “But one of them was talking about the breakup of the Soviet Union, and this was in 1967, over 20 years before it happened. He was trying to get across that just because something is the status quo doesn’t mean it’s the right thing or the forever thing . . . that things can and do change.”

With that in mind, for 20 years Nyberg has been engaged with the Michigan Roundtable for Diversity and Inclusion, a human rights organization. “Human rights space doesn’t get much money,” he said. “Hunger is something people can identify with: If I give you a dollar you can buy five meals, but human rights issues are harder to conceptualize.

“The Roundtable may be of the reasons Detroit has not gone through the recent upheavals some other places have. We have a large Arabic population and a large Muslim population. But conversations among all groups have established a solid foundation of trust.”

On an even more basic level, ending hunger is the cause Nyberg is most passionate about today. As a director and former chair of Forgotten Harvest, a nonprofit agency in Detroit, he helps coordinate the logistics of rescuing food that is to be thrown away and getting it to people who need it. In the 11 years he has been involved with the agency, it has gone from rescuing one million pounds of food a year to 45 million pounds — which translates to 45 million meals a year that would otherwise go in the landfill.

Talking about managing a fleet of 37 delivery trucks that gather food from grocery stores, casinos, restaurants and other venues, raising about $8 million a year, and persuading more businesses to participate, his passion for the work is evident.

“I have gone to ride the trucks, working with the drivers, picking up the food in the morning, and in the afternoon we’re delivering it to these different agencies. Now people know us and sometimes there will be people lined up to get fresh fruits and vegetables. It’s really good stuff; we never give food we wouldn’t serve in our own homes. We’ve developed a wonderful reputation and people will now contact us when they have food to donate.”

Forgotten Harvest is among the nonprofits he is most engaged with since stepping back from the day-to-day operations of banking. He is also a director of the Community Foundation for Southeast Michigan, which each year provides millions of dollars in support for programs and agencies that help build a better life for area citizens.

Nyberg remains on the board of directors of Flagstar Bank, a $13 billion business and the largest bank headquartered in Michigan,

Born in Minneapolis, Nyberg moved to Birmingham, Mich., as a teenager and attended high school there. But when it came time to go to college, he took a different path from most of his friends, who were going to Michigan schools. He followed his own North Star and pursued his wide-ranging interests as a BGSU undergraduate, earning dual degrees through the former College of Liberal Arts.

On campus, he threw himself into a variety of pursuits, from student government to intramural athletics to individual study projects with history faculty members, including Hess.

“That really was a strength of BGSU for me, the diversity of the activities I was involved in,” he said, adding that he would encourage today’s undergraduates to pursue “a balanced life here of academics, athletics, fine arts and cultural activities, and community activities. Make sure you don’t lose this opportunity; take advantage while you’re here, even if it means getting outside of your comfort zone.”

The one thing he did not get the chance to participate in while in college was community service, which has since become a major focus of a BGSU education and one that he welcomes. But as a business executive, he managed to bring this value into his work practices and policies — “because I really think helping people is part of our DNA,” he said.

Immediately after graduating, he married his high school sweetheart and was drafted into the Army. After two years in Germany assigned as a chaplain’s assistant, he began his MBA program at the University of Michigan, where he said he felt very well prepared by BGSU for the highly competitive environment. He then went right into banking.

Over the course of his long career, which was primarily with NBD Bancorp Inc., now a part of J.P. Morgan Chase, he took leadership of a number of divisions that were not exactly in his “wheelhouse.”

“I had a very different career in banking, he said. “I had a good reputation as someone who could move into an area with which I was not familiar —from marketing to systems development to commercial lending to capital markets and even information technology at one point (leading his then-teenage daughter to exclaim, “But, dad, you don’t even know how to operate our answering machine!”), and, as a business person, figure out what our goals and objectives were, who we were supposed to be working with, what were our resources, what we needed to succeed.”

No matter in what aspect he was called upon to serve, he said, he always asked the questions: “Who is my customer? What do they expect? How can I deliver against those metrics?”

By any metrics, it could be said that Nyberg’s is a life well lived.