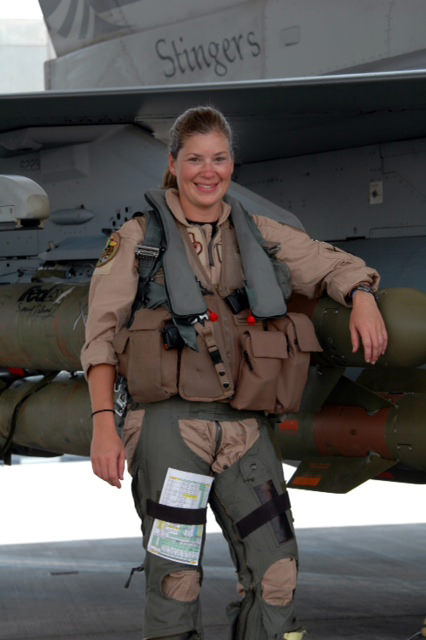 Becky Ohm ‘95 and her husband own a coffee shop within a 15-minute car ride north of Bowling Green State University’s campus, but it’s within a “blink of an eye” when flying in an F-16 Falcon. Ohm should know, she was a fighter pilot for 14 years.

Ohm said she's been interested in flying since she was a kid remembered trying to find her “thing” in high school.

“I was just talking to my mom about this because I remember I didn’t really have any hobbies or anything,” said Ohm, who grew up in Oregon, Ohio, and graduated from Clay High School in 1991. “I wasn’t into sports, so I was looking for that one thing I would be passionate about and I had an Air Force Academy recruiter come talk to us in high school. And after he was done talking about the Air Force and flying I was like, man, that’s what I want to do.

“My mom said the version is, I was sitting in front of the TV watching 'Top Gun' and I said I wanted to do that. And she said, okay, whatever you want, honey. Then, I kept talking about it so she had to take me seriously.”

Flying did become Ohm’s thing as she majored in aviation technology at Bowling Green State University. She also got her pilot’s license and certifications for commercial flight and flight instruction.

“Basically, I graduated as a commercial pilot,” she said. “When I got to Bowling Green, I met Bob Ackerman, who was a flight instructor there. He was also an F-16 pilot at the base. He told me about the Ohio Air National Guard. I hadn’t even heard of it before him. When I was taking lessons at BG, I knew I wanted to go into the military. After he told me about it I went to the base [in Swanton, Ohio] and researched and then I joined in January of ‘93, so almost midway through college.”

Ohm joined the Ohio Air National Guard, home to the 180th Fighter Wing, as an enlisted person and worked as a mechanic for four years. Then she went to basic training and tech school before going on her first deployment.

About a year later, restrictions were eased and Ohm applied to become a fighter pilot.

“Once I did that, I was able to get done with the rest of my schooling,” she said. “1997 is when I actually went to pilot training, so I was done with college and I was working as a flight instructor and as a fighter pilot.” 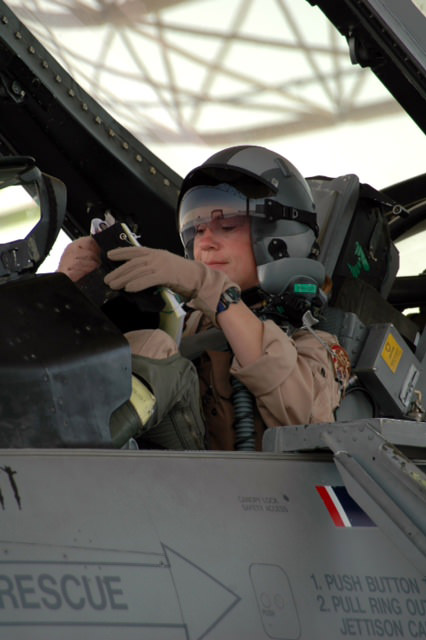 Ohm was deployed for combat three times as a fighter pilot with the 180th Fighter Wing.

“The missions were all flying over Iraq or Afghanistan from different bases like in Turkey and Kuwait and Israel and Qatar,” she said. “The missions changed over the years. It was Operation Northern and Southern Watches and then my last deployment was Operation Iraqi Freedom, which was much different than the previous ones.

“During Operations Northern and Southern Watches, we didn’t really have guys on the ground in Iraq. We weren’t really occupying it at the time and then the last one I went on was in ‘05, when we were actually in Iraq and we had Army and all kinds of ground troops. Our big missions for Iraqi Freedom for the fighter pilots were to support the guys on the ground."

After her final deployment, Ohm was sent to instructor school and in 2006 became the first fighter pilot in Ohio to become an instructor. She now is the Aircraft Maintenance Squadron Commander at the 180th.

“As a commander, I have a different role,” Ohm said. “I’m in charge of the welfare of the personnel and the aircraft. I have certain sections such as the weapons section, the guys who load the bombs and missiles up on the planes, and the flight line crew chiefs, which is what I did when I was an aircraft mechanic. We have the flight line avionics people that are in charge all the electronics of the airplanes and we also have an alert mission, which fall under me as well.

“It’s more of a different kind of leadership role than being an instructor pilot over in operations. You’re teaching the pilot and it’s a smaller group of people and now it’s on a lot larger scale.”

Now that Ohm has both feet planted on the ground, she has plenty to keep her busy.

She and husband John, also a pilot, have three children: Zachary, 6; Olivia, 5; and Emily, 2. The couple have owned and operated the Flying Joe coffee shop at Levis Commons in Perrysburg since 2007. The name Flying Joe represents their love of aviation and coffee.

“My husband was active-duty Air Force,” Ohm said. “So even though I was in the Guard after we got married, I moved around with him. One of the places we lived in was Oklahoma. I was a commercial pilot with Comair and a fighter pilot with Toledo at the time. I was gone a lot so when I got back in town we would go to this little coffee shop and it was just really fun and nice to hang out.

“We both said at the time this would be a great little business to have. We didn’t think about all the other stuff that went into it, of course. Even more than just the coffee we really enjoy meeting people through the coffee shop. I think that’s what we’re really passionate about. Still to this day, I love it because I come in here and I see customers we’ve had from day one. We know their families and they know ours. That’s what I love about it. It brings people together.”