BOWLING GREEN, O.—Dr. Stephen Langendorfer of Bowling Green State University has built an international reputation as an expert on water safety and developmental aquatics through his writing, editorial and service work to prevent drownings. Recently he crossed the Atlantic to receive a special honor in Ireland. During his trip he also gave seven presentations in Ireland, Poland and Spain. 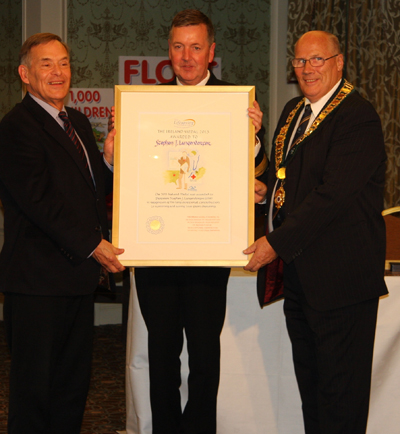 Honorees also receive a commemorative piece of original art consisting of calligraphy in the style of that in the ancient Irish Book of Kells manuscript and images related to the recipient’s life and work. Mellett and Royal Life Saving Society Ireland’s Branch President Edward Duffy jointly presented the commemorative parchment.

Langendorfer, a BGSU faculty member since 1994, has served as a volunteer aquatic consultant to the American Red Cross since 1987, is a member of the Red Cross’s Scientific Advisory Council and is the author of numerous scholarly publications in developmental aquatics including co-authoring “Aquatic Readiness: Developing Water Competence in Young Children.” He is the founding editor of the International Journal in Aquatic Research and Education, a peer-reviewed scholarly publication focusing on the dissemination of noncompetitive aquatic research from around the world.

The Lifesaving Foundation is an independent lifesaving charity based in Ireland. It has an international membership that supports lifesavers in low- and middle-income countries and promotes general research into drowning through supporting research in developing countries and organizing a regular drowning prevention and research conference. Its membership ranges from international university professors and world-leading medical doctors to members of small community organizations with few formal qualifications but a lot of practical experience.

The Ireland Medal was introduced in 2004 in conjunction with the Royal Life Saving Society to mark the centenary of organized lifesaving training in Ireland and to recognize exceptional contributions to saving lives from drowning by Irish lifesavers or lifesavers of Irish descent. Langendorfer is Irish on his father’s maternal side. Eleven medals have been awarded to eight individuals from Ireland, U.S., South Africa, United Kingdom and Australia and three Irish organizations. The foundation has a website devoted to the Ireland Medal.

Afterwards, Langendorfer said he and his wife, Jeanne, “thoroughly enjoyed all of our time in Ireland. We found the ceremony to be a humbling experience and a wonderful honor for us both. We were very appreciative of the tremendous hospitality shown by everyone at the conference and during our entire stay in Ireland. Learning more about my Irish heritage and the history of Ireland was a particular thrill."

Among Langendorfer’s seven presentations during the European trip were a "golden lecture" on water competence at the Wroclaw University School of Physical Education in Poland, and another two at the Spanish Swim Coaches Scientific Congress in Granada, Spain.