BOWLING GREEN, O.—Dr. Nancy Orel, a Bowling Green State University gerontology professor and associate dean of the College of Health and Human Services, is on a mission to improve services for lesbian, gay, bisexual and transgender (LGBT) older adults. 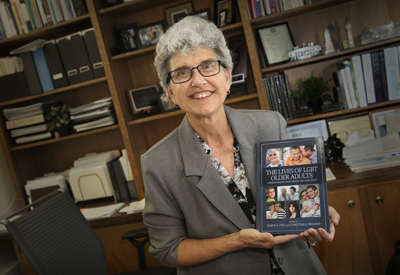 Nancy Orel Through the book “The Lives of LGBT Older Adults: Understanding Challenges and Resiliencies,” which she co-edited with gerontology colleague Dr. Christine Fruhauf of Colorado State University, Orel is trying to combat the “isms” that have plagued many LGBT older adults.

The intended purpose of the book is to make visible to professionals who work with older adult populations the needs and concerns of “this invisible minority group,” she said.

And in her caring and positive way, Orel added that the book also focuses on the strengths and resiliency of LGBT older adults who have endured discrimination and a multitude of “isms” most of their lives. In fact, she is proud that the book emphasizes “those aspects of LGBT older adults that have enabled them to successfully adapt to aging through resiliency, coping mechanisms, adaptation and managing disclosure.”

Orel first became aware of some of the issues facing LGBT older adults when she was finishing up her Ph.D. in counseling and completing her necessary clinical hours at rehabilitation centers in northwest Ohio. She had been asked to assess the cognitive functioning of a female patient who was to be discharged from a rehabilitation stay at a facility. The staff had been concerned that she was showing “signs of dementia” because she kept talking about going home with a man. After several sessions, Orel gained the woman’s trust and learned that she was involved in a lesbian relationship. The woman admitted she would rather risk the diagnosis of dementia than to come out to the nursing home staff about her relationship.

“Here’s a population whose needs aren’t being met,” Orel determined at that time.  “I wanted to systematically investigate their concerns.”

She conducted numerous focus groups with LGBT older adults, and the results of this research indicated that they had many needs similar to the general older adult population — physical health, mental health, housing, and finances. But she also discovered many unique concerns such as “social stigma and discrimination based on sexual orientation and being estranged from their family of origin. However, many discussed the importance of establishing families of choice,” Orel said.

Fast-forward to 2012, when the White House convened the first-ever Conference on LGBT Aging and the U.S. Supreme Court announced it would hear the marriage case of Edith Windsor v.  United States, taking on the Defense of Marriage Act. Orel’s work with LGBT older adult populations suddenly took on new life.

With the changing perspectives, the American Psychological Association decided it was time for a publication focusing on the latest research on the topic. Orel and Fruhauf were asked to write a book to address current research on LGBT older adults. They decided to edit this volume so that they could also include authors who are leaders in the field of LGBT aging and have written extensively on key topic areas. What resulted is a book that provides an overview of cutting-edge research on LGBT older adults and their families, with a focus on topics such as health and well-being, stigma, community resources, and spirituality in end-of-life decisions among LGBT older adults. Cody Swartz and Morgan Bunting, who were both BGSU gerontology students involved in the groundbreaking research, co-wrote the chapter on spirituality, which is a source of pride for their mentor.

Orel hopes the book will educate professionals as well as students studying gerontology, sociology, psychology, social work, public health, and human development and family studies. As more professionals become aware of and understand the needs of this population, “we can create safe and affirming environments for LGBT older adults,” Orel said.

She also would like to promote a change in the way research is conducted by encouraging researchers to include sexual orientation and gender identity in the demographic questions that they ask. By adding these questions to research surveys, the amount of information that could be collected and utilized would be exponentially better than what has been included in the past, she said.

Michael Adams, executive director for Services and Advocacy for GLBT Elders (SAGE), wrote the foreword for the book and acknowledged Orel and Fruhauf’s work as an “outstanding effort to deepen our collective understanding of LGBT aging.”  He also “welcomed their continued contributions to theory and practice as we work together to realize this shared agenda of transforming the landscape for LGBT older adults and their families.”