Traditional healing in a modern world

As graduation speakers are fond of saying, the commencement ceremony does not represent an end, but a beginning. That is certainly true for Samantha Martin, an August graduate in the Cross-Cultural and International Education (MACIE) program at Bowling Green State University. 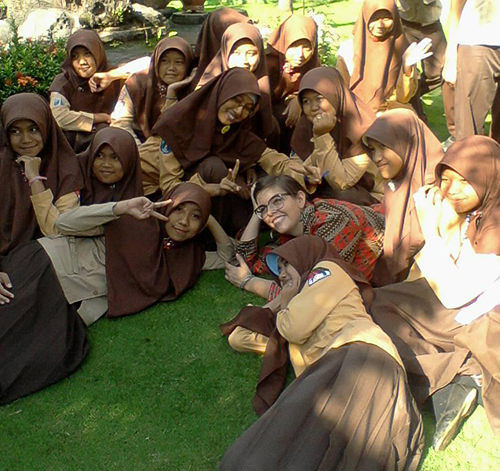 Martin with some of her students at the Islamic High School of Panekan, in East Java, during her Peace Corps service.For Martin, commencement was the next steppingstone in her evolution as a scholar. She is preparing to return to Indonesia in early September, this time as a Fulbright Student Scholar. She served in the island nation as a Peace Corps volunteer in 2010-12. Backing her at BGSU has been a campus-wide support team of faculty and staff.

Martin will conduct a case study of traditional healing practices on Java, the most populous of the thousands of islands that make up Indonesia.

“I have been approved for my research permit from the Indonesian government and am now waiting for my visa to be processed,” she reported. “I have been doing some preliminary research. I received some great help from Dr. Jeremy Wallach and Dr. Esther Clinton in the popular culture studies department at BGSU, who directed me to some great materials and books on Indonesian culture and history. They both have experience in Indonesia, and Dr. Wallach in particular has done quite a bit of research there himself.

“I've also been starting to connect with the existing Peace Corps network in Java, and hopefully those connections will help me learn about communities that may be interested in hosting me and participating in the research project.” 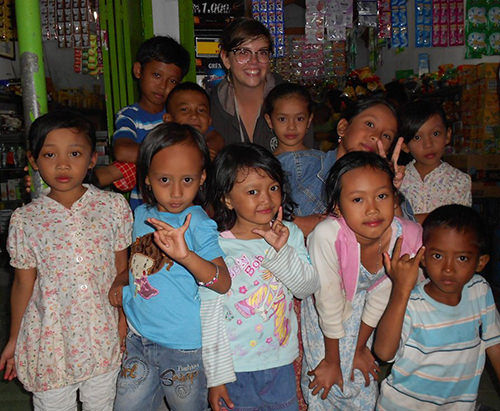 Martin with neighborhood children who studied English with her after school most days.Martin said she also received important advice and assistance from Dr. Nancy Patterson in the School of Teaching and Learning, who had been a Fulbright scholar, and MACIE director Dr. Christopher Frey, who had also worked with the Navajo people, as Martin did in her undergraduate program. “We shared the same experience, around 10 years apart,” Martin said.

Patterson, who has worked with Martin on two grant submissions related to Indonesia, said, “Sam is a singular person who is the perfect mix of compassion and initiative. Whenever I work with her, I learn about myself, which is the sign of a true teacher and humanitarian. Most impressive is her command of Bahasa Indonesia, which I have seen her use with fluency and grace on our Skype calls with her good friends at Universitas Muhammadiyah Malang. Sam Martin will continue to elevate BGSU’s reputation in Indonesia, and I relish hearing about her work in years to come.”

Indonesia is the fourth most populous country in the world, and an important trading partner. Yet, like most U.S. citizens, Martin knew almost nothing of the country until she served there with the Peace Corps. She was part of the first cohort to serve there since 1964 following President Barack Obama’s 2009 re-opening of relations with Indonesia.

The complex culture of the island nation resonated with Martin.

“I want to be contributing something, not just taking information from them and leaving”Martin’s master’s thesis is a case study of women healers in south-central Indiana. “The possibilities for a comparative project on healers’ experiences in the U.S. and Indonesia are exciting to me,” she said.

Reflecting on her life so far, she said, “I never thought when I entered the Peace Corps and was assigned to a nation I knew nothing about that Southeast Asian Studies would turn out to be so interesting to me. But MACIE helped give me some direction, and helped me develop my thesis project. That’s what’s so special about MACIE: you have a group of really neat people with such diverse experiences and it’s still small enough to be very intimate.”

Before learning she’d been accepted into the Fulbright program, Martin was accepted by several U.S. universities’ doctoral programs. Her Fulbright experience on Java is sure to enrich and inform her future educational and professional choices.