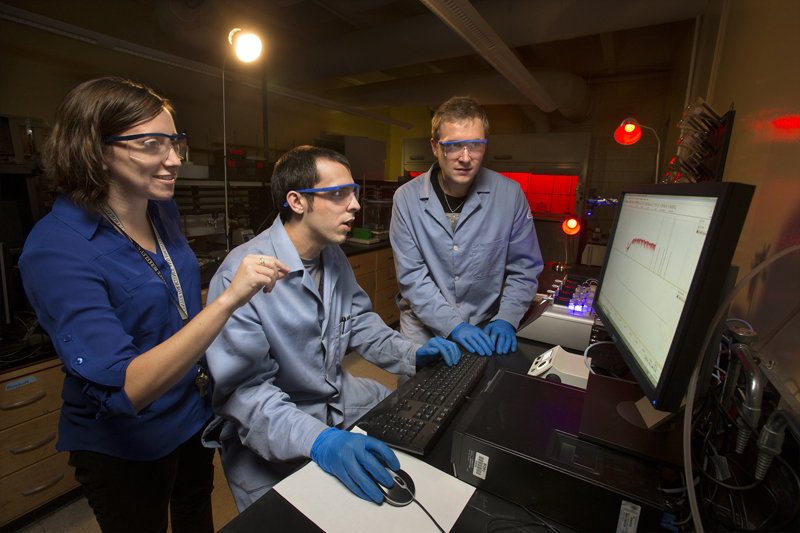 Using a myograph, Dr. Alexis Ostrowski and undergraduates Jon Mase and Chris Sosnofsky (left to right) chart the response of a pig artery to one of their photo-responsive materials while irradiating with blue light.

Working in the lab of BGSU photochemical scientist Dr. Alexis Ostrowski, he and senior Jon Mase are developing light-reactive materials that will target heart patients’ narrowed arteries, or release antibiotics or tumor-destroying agents directly where needed.

The two chemistry majors have shown a zeal and aptitude for research that has already propelled them to achievements unusual for undergraduates. Both received Center for Undergraduate Research and Scholarship (CURS) grants this summer, which paid for them to continue their ongoing work in the labs.

Mase is first author on a paper about his project, the light-controlled release of nitric oxide from solid polymer materials, and is included on a patent the lab has filed. Sosnofsky will be a co-author on a second paper, about the development of a biocompatible polymer that will release its “cargo” only when irradiated with light.

“Drugs go everywhere in the body, which is one reason we often have side effects from them,” Ostrowski said. “By being able to use light to target only the area we want to treat, we hope to reduce side effects and possibly reduce the dose needed.”

Mase and Sosnofsky’s projects involve using light to activate the drugs, in Mase’s case nitric oxide molecules, which dilate blood vessels and can lower blood pressure. The materials that encase the drugs are designed to upconvert lower-spectrum blue light into the higher-energy near-infrared light that can penetrate tissue.

Mase is working with graduate students Anton Razgoniaev and Dayana Muizzi on perfecting a nitric oxide-releasing polymer that will react to near-infrared light, which is not damaging to cells and penetrates the deepest into tissue.

“My molecule only releases nitric oxide in blue light. We want to release it in red light,” he explained, giving as an example the way a hand will appear red when a light is placed next to the skin. Although it would be easier to use a polymer that reacts to ultra-violet, or UV light, UV is damaging to cells and may not penetrate far enough through the skin to reach the area where treatment is needed, Mase said.

Razgoniaev made some of the nanoparticles that upconvert near-IR light to visible light, and is a co-author on the paper and also listed on the patent. Muizzi is making new molecules that release nitric oxide with red light.

Thanks to the CURS grant, Mase was able to devote himself to his research this summer. “It’s a lot better,” he said, “not having to start an experiment and then leave for class, or only doing experiments you can finish in the time you have in the lab that day.

“Undergrads getting a paper on their own is a rare thing in chemistry,” he observed. “The more time you can put into it, the better.”

Sosnofsky, from Kawkawlin, Mich., works with graduate student Giuseppe Giammanco, with whom he is co-author on their paper, on developing a light-responsive-release polymer that will deliver a blood pressure drug.

Even though his goal is to become a pediatrician and he was also studying hard to take the MCAT exam in August, Sosnofsky spent as much time as allowed in the lab. “You have to be committed to want to do research. I’ve always enjoyed chemistry and it comes fairly easily to me.”

He is not required to do the research: “It’s only me wanting to be in there every day” that makes him do it, he said. “The reward is that you can see this thing developing and you know you could discover something that could be really good.

“I like solving problems in chemistry,” Sosnofsky said. “You see the results and you have to change your formula on the fly.”

Both he and Mase joined Ostrowski’s lab shortly after she came to BGSU. “They approached me,” she recalled. “I told Jon I wasn’t ready to accept undergrad students since we didn’t have the lab set up yet, but he was persistent.” The opportunity presented itself when one of the original graduate students left to join the military.

“I got incredibly lucky,” Mase said. “When I found the lab we were a brand-new lab, and her lab is the only one that does the work I’m interested in, working with biomaterials and medical devices.”

Mase, from New Philadelphia, Ohio, had started as a history major, which he said he thoroughly enjoyed and still has a minor in, but found that “there was nothing history-related I wanted to do as a job.”

Since he met Ostrowski, he has immersed himself in the research. During the summer he came in about 7:30 each morning and began work right away. Some of what he does resembles cooking — dropping the nitric oxide into the liquid polymers and then cooking them for a couple of days until they become solid.

“We want to find polymers that allow gases to escape, but only when they are irradiated with light,” he said. “We have to make sure it isn’t escaping on its own. We put the polymer beads in liquid for a month and then check the liquid to make sure there are not biologically relevant amounts of NO (nitric oxide) in it.”

Testing of the materials has recently begun on tissue from pig’s hearts, which share the same anatomy, size and method of functioning with human hearts, Ostrowski said.

The researchers remove arteries from the hearts, cut them into thin slices and then stretch them until there is tension on them before exposing them to the polymers.

“We got a new piece of equipment called a myograph that allows you to watch the changes,” Mase said. “By analyzing the data, you learn what effect is taking place.”

“I did undergraduate research beginning my freshman year in college, which is the number one thing that led me down this path,” she said. “I started out wanting to go to medical school but found that what I really was interested in was chemistry research.”

An unintended consequence is that “I’ve only had a few months off since I was a sophomore in college,” she observed ruefully. But on the upside, “I knew what research life is like. I also learned early on there’s a lot of failure. There’s a saying that scientists have another word for failure. It’s ‘data.’ You always learn something, even when your experiments don’t come out the way you’d predicted.”

Mase said that, working in the lab, “I have an idea what grad school will be like and what I want to focus on. I’d like to work with biomedical materials, biosensors and analytical methods.”

But before he eventually leaves for graduate school, he will train the next undergraduate to take his place so the work can go on.