BOWLING GREEN, O.—Dr. Kefa Otiso is familiar with the geography around Kisii University in southwest Kenya. He went to high school across the river from the university when it was still a teachers college. Next summer, Otiso will return to the area for three months to contribute his geography expertise to the university through an inaugural Carnegie African Diaspora Fellowship (CADF). 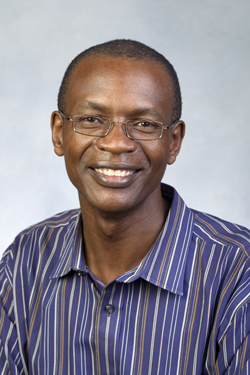 A professor of geography in Bowling Green State University’s School of Earth, Environment and Society, Otiso was one of 33 African diaspora scholars in the U.S. and Canada chosen this year to work with 24 higher education institutions in Africa on projects in curriculum development, research, training and mentoring, and graduate teaching.

“The program is mainly targeting people who were born on the African continent and who wish to help bring up its higher education standards,” Otiso said. “It goes beyond the usual monetary remittances sent home by African diaspora members in that it seeks to harness their skills, networks and technical expertise to aid the continent’s socioeconomic development. The program also deepens collaborations between the fellows’ African countries of birth and the U.S. and Canada. It has many parallels with the U.S. Peace Corps and the Fulbright programs. The CADF program is a promising model that African countries can emulate in their quest to gain more from their diasporas.”

Otiso will work with Kisii geography faculty to strengthen the department’s existing curriculum and to develop curricula for master’s and Ph.D. programs in geography.

“While this is a big task, it’s a good opportunity,” Otiso said. “I’d like to create a prototype for the structure of their M.A. and Ph.D. programs. We’ll start where they are, and they can develop their capacity over time.”

Otiso said his success in securing the fellowship would not have occurred without the support of Dr. Michael Y. Ogawa, BGSU’s senior vice president for research and economic development and dean of the Graduate College, and Prof. Maurice Amutabi, deputy vice chancellor for academic affairs at Kisii.

An urban and economic geographer, Otiso is the president and founder of the Kenyan Scholars and Studies Association (KESSA), an independent, nonprofit professional association established for the purpose of advancing scholarly, scientific and research work on the Republic of Kenya. KESSA conducts an annual conference that until this year has been held at BGSU and which has featured keynote addresses by Kenyan ambassadors to the United States, leading Kenyanist scholars and Dr. Jendayi Frazer, the former U.S. Assistant Secretary of State for African Affairs and the first woman to serve as U.S. ambassador to South Africa. In recognition of Otiso’s contributions to the welfare and advancement of Kenyan people in the U.S. and Kenya, former Kenyan President Mwai Kibaki in 2009 named him an Elder of the Order of the Burning Spear.

Otiso is also the author of two books, on Tanzania and Uganda, for Greenwood Press’ Cultures and Customs of Africa series and co-author of a textbook on population geography. At BGSU, where he has been a faculty member since 1999, he is also the director of the Global Village Residential Learning Community.

The Carnegie program is beneficial to the home and host universities, the fellows, and their respective countries of birth and residence, Otiso said. In a global economy, knowledge and skills are constantly circulating, and success comes through cooperative competition.

“Everybody must bring their ‘A’ games to the table for the greater good,” he explained, adding that Kenya in particular and Africa in general have unusually young populations that, depending on how they are managed, can be seen as an asset or a liability. "Many U.S. companies see Africa’s youth as the next growth opportunity and are rapidly setting up operations on the continent, particularly in Kenya, Ghana, Nigeria and South Africa. BGSU students and alumni could benefit from the continent’s many professional and business opportunities.”

On a higher level, the diaspora fellows program “will help achieve the goal of contributing to the development of African higher education as a vibrant and internationally competitive sector fulfilling the aspirations of building prosperous and inclusive economies, viable knowledge societies and sustainable democracies," said Dr. Omotade Aina, Carnegie Corporation director of Higher Education and Libraries in Africa.

For Otiso, the fellowship also provides an opportunity to pursue his own scholarship, which is focused on globalization, economic development, international migration, cultural change and urban planning and management in the African and North American context. He will spend the year before his visit to Kisii laying the groundwork for various research projects.

“Without programs like Carnegie, it becomes too expensive to go back and forth to Kenya to conduct research,” he said appreciatively.

He would also like to deepen BGSU’s ties to Kisii University and Kisii, a city about the size of Toledo, and the agriculturally rich surrounding region. “The U.S. has had an interest in this region that dates to the early days of the Peace Corps program,” Otiso said. “It’s an interesting location and would give good exposure for our faculty and students.”

Otiso’s goals are in keeping with the fellowship program’s goal of “facilitating equitable, effective and mutually beneficial international higher education engagements between scholars in Africa and African Diaspora academics.”

The program is managed by the Institute of International Education in collaboration with Quinnipiac University, which chairs the Advisory Council, and is funded by the Carnegie Corporation of New York.