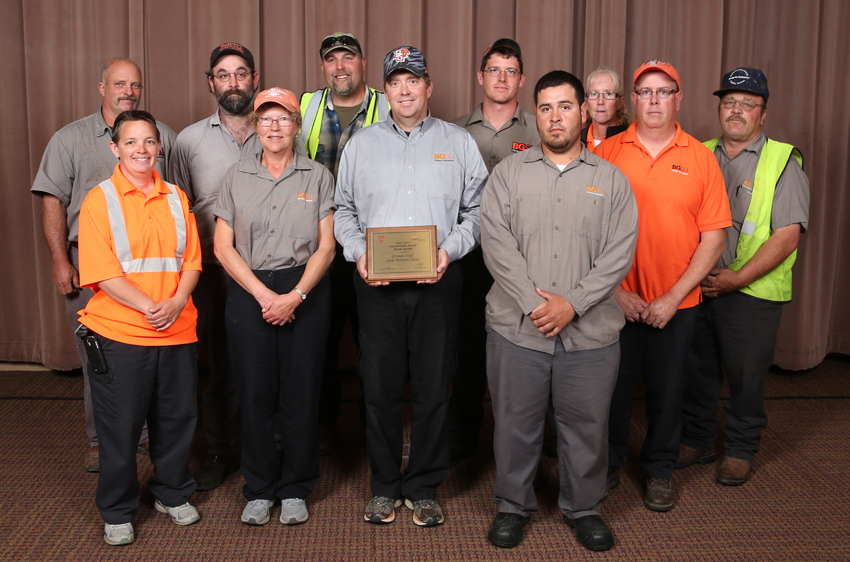 The winter of 2013-14 was one for the books. With nearly 10 weeks of bitter cold, record snowfall and harsh winds, the BGSU campus was an inhospitable place for faculty, staff and students. And yet a university must go on.

That is where the Campus Operations Grounds Department snow removal team came in. Keeping the campus accessible and safe became a daily, and nightly, battle that tried the mettle of even the hardiest staff members. But “during one of the worst winters on record, this team stood tall,” said Aaron Kane, manager of parking and shuttle services, in nominating the group for the Classified Staff Team Award.

The group will share a $1,500 award and their photo will appear on a commemorative plaque hung in the Bowen-Thompson Student Union.

“Record snowfall tipping 80 inches this season was a true challenge for the team,” said Dr. Andrea Depinet, director of campus services. “Bowling Green State University Grounds covers an area comprised of an astonishing 8,996 parking spaces, 4.75 miles of roadway and 38 miles of sidewalk. The team stepped up to meet expectations, and exceeded them by going above and beyond day-to-day activities. Driving snow and ice was not only physically difficult but mentally exhausting. Team members took time away from their families to put the customer first and should be applauded for their efforts.”

The team’s work made the campus safer and allowed access to police and emergency vehicles should they have been needed, said Diana Bechstein, recreation and wellness. University business could go on, with vendors and service companies making deliveries and faculty and staff able to get to campus and park. Despite the extreme conditions, the team did its work without complaint, she added.

“The team grew in many ways this year, as individuals and as a department,” Depinet said. “Internal culture among the group changed; they banded together, which was subsequently reflected in their work. This year in particular, each member of the team took initiative to contact their supervisor to notify them regarding availability and ask for additional duties. The team collaborated and increased communication among the group and with our customers.”

Now that spring is here, they have continued their efforts in behalf of BGSU. “Although the winter was harsh, the team also requires recognition for their efforts regarding the beautiful campus they have created and their influence on student decisions to come to Bowling Green State University,” said Depinet.