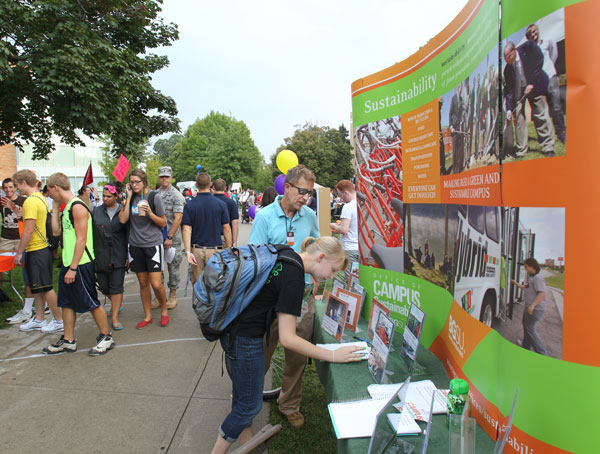 “The PCC is a year-round commitment by us as an institution to reduce our emissions and protect the environment,” Hennessy said. “So Earth Day is really every day, but the annual event is an opportunity to celebrate, spotlight our achievements and collaborate with the city. It’s like a New Year’s resolution in that it gives us a chance to step back and renew our commitment.”

Earth Week on campus begins April 21 with a talk by Dr. Mark Lung, executive director of Eco2Librium, a nonprofit organization that organizes and implements carbon projects worldwide that provide funds for clean development while reducing global atmospheric carbon dioxide. He will speak at 7 p.m. in 201 Bowen-Thompson Student Union.

Lung has two advanced degrees and 20 years’ experience related to natural resource and energy use, carbon management, and carbon offset project development. He has helped develop action plans for U.S. colleges, cities and counties, and designed super energy efficient buildings and homes. He has worked in Kenya for the last eight years with community-based organizations to conserve forests through sustainable use research and livelihood development. Current carbon projects in Kenya create hundreds of jobs while restoring and conserving the last remaining lowland rainforest there.

Also on April 21, the annual campus When You Move Out, Don’t Throw It Out collection begins. Students and employees can deposit unwanted but usable clothing, furniture and nonperishable food items in collection bins in all residence hall lobbies, Greek houses, and the Bowen-Thompson Student Union lobby. They will be distributed to nonprofit agencies in the area, thus reducing what goes into the landfill while saving BGSU disposal costs.

A highlight of the week is the annual Eco-Fair, from 11 a.m. to 3 p.m. on April 23 in the Union Oval. The fair is an educational event featuring organizations and initiatives, both on campus and within the community, that deal with the environment and sustainability.

On April 26, the Outdoor Program will sponsor an Eco Scavenger Hunt across campus from 1-3 p.m., beginning at the Perry Field House. Participants will search for clues that answer questions about environmental issues and Earth Day.

Three movies with environmental themes are slated, all at 7 p.m. in the Union Theater. They are sponsored by the Student Green Fund and the Department of Environment and Sustainability.

A number of service projects are available for classes and individuals, viewable on the community Earth Day site.