How do you tell your small children their mother has been killed and will not be coming home? How do you cope with your fear and sorrow when your son develops mental illness and disappears? How do you go on after working your way out of poverty only to find your life upended by tragedy?

And most of all, how do you keep touch with your true self in the midst of all existence brings? Dr. Richard Messer, professor emeritus of English, has spent a lifetime striving to maintain his openness to life and to others in spite of enduring what “wasn’t supposed to happen to my family.”

In his latest book of poems, “Dark Healing,” published by Fisher King Press, Messer brings the perspective of someone who has come through a great storm on a mountain and is looking back down at it, a metaphor he said is often used in grief counseling. The poems trace his journey through shock and despair to functioning and eventually back to joy. 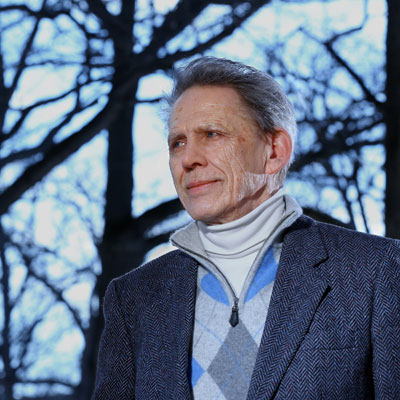 “Dark Healing” comprises poems from his two previous collections, “Murder in the Family (1977-94),” tracing his journey through the dark valley of suffering back to vitality, and “A Life on Earth (1989-2005),” which concerns his early years growing up in Colorado, his difficult father and the loss of both parents, and young love. Some of the newer poems in the “Dark Healing (2003-13)” section are experimental, playing with new forms, but all bring the message that while life is suffering, that is also one of its gifts.

Poet Naomi Ruth Lowinsky wrote of the book, “‘Dark Healing’ is a testimony to the transformative power of the creative imagination. Messer emerges, as we do, ‘fierce with redemption, robed in song.’”

Dream images are potent in Messer’s poetry. A follower of Jungian psychology, he believes in healing through “getting in touch with the unconscious,” particularly through the study of one’s dreams. “By befriending the dream, writing it down and thinking about it during the day, we can learn what our dreams are trying to tell us,” he said.

The natural world is also a strong presence in the poems — sometimes as metaphor, as in “On the Way,” where “the dawn ambles toward me, like a girl looking down, admiring her new red shoes,” but often as visceral sensations calling him back to earth from his reverie.

“The book was written for people who are suffering, who are working through trauma and trying to come out the other side,” Messer said. Even those who have not experienced violence or tragedy in their lives must undergo some trauma, he said, whether the pain of leaving home or from world events that leave us shaken.

“Suffering is part of culture and yet our culture tends to suppress the idea that someone might be in pain or grieving or in despair,” he said.  “Insurance companies give you six months to be depressed,” he noted wryly. “And yet this is a part of life, too, and it’s all right to be sad. But you need to get some guidance and reach out and find that support community.”

For Messer, who taught at BGSU from 1975-97, one important community is the National Alliance for the Mentally Ill (NAMI), which provided valuable support to him and his family throughout his son’s illness. After many years of struggle, his son is now stable and working part time for NAMI. Messer is on the board of the organization and a strong advocate.

“The stigma against mental illness is so ingrained it’s almost like racism,” Messer said. “Our goal is to attack that stigma. We want to help people move from feeling like a victim and helpless to seeking help and surviving and thriving.”