“Sometimes it’s better to not be an expert on something in order to make a discovery,” said Dr. Joseph Michalski. A surprising finding by the 1999 alumnus of BGSU’s geology program was featured on the October 2013 cover of Nature, the most prestigious journal in the sciences.

Now a research scientist with the Planetary Science Institute in Tucson and a visiting scientist at the Natural History Museum in London, Michalski discovered that several large craters on Mars are not the result of a meteor striking the planet, as previously believed, but of “supervolcanoes” that happened more than 3.5 billion years ago. The Nature article, “Supervolcanoes within an Ancient Volcanic Province in Arabia Terra, Mars,” co-authored with Jacob Bleacher, describes new evidence for massive, explosive volcanoes that would have tortured the Martian surface early in the planet’s history.

It has been known for over 40 years that Mars contains large, basaltic shield volcanoes, very similar to those that compose the Hawaiian Islands. But these volcanoes are different, Michalski said. They are not mountains or large shields; they are simply massive collapse features (calderas) where the upper crust of the planet exploded and collapsed over 3.5 billion years ago. 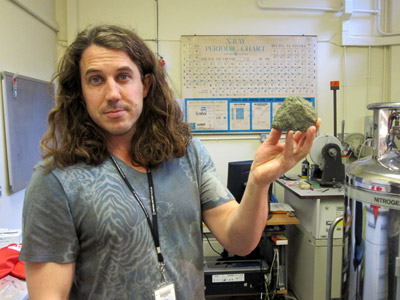 Joseph Michalski holding peridotite, a rock made mostly of olivine; olivine is a mineral common on Mars.

“I thought, ‘I don’t know what’s going on here,” he recalled, “‘but these are clearly volcanoes.’”

A specialist in mineralogy and geochemistry, especially of clay minerals, Michalski said he is not an expert on volcanoes, which may have freed him somewhat from the prevailing mindset about the craters’ origins.

“Sometimes it’s better to not be an expert on something in order to make a discovery.”

As the introduction to the article states, “The discovery of a new type of volcanic construct in the Arabia volcanic province fundamentally changes the picture of ancient volcanism and climate evolution on Mars.”

“We don’t know much about early volcanism on Mars,” Michalski said. Unlike the giant Hawaiian shield volcanoes, which build up their mountainous shape through repeated eruptions of flow upon flow of lava, these eruptions were dominated by explosive activity.

“That’s weird,” he said, “because basaltic volcanoes like you have on Mars are generally thought not to be explosive most of the time — certainly we do not have basaltic supervolcanoes on Earth. But Mars is different in many ways: the planet has lower gravity and lower pressure so that even basaltic volcanoes can be very explosive if the magma rises through the crust rapidly. If the gases in the magma cannot come out gradually, then they will all come out suddenly when the magma reaches a shallow depth in the crust, resulting in a massive explosion. These volcanoes would have created large deposits of ash around the calderas and deposited thin deposits of ash globally.”

Michalski uses some of the skills he learned as an undergraduate in geology at BGSU to analyze materials on Mars. “I received an excellent and well-rounded education there, and I always appreciated that some of the professors, such as Drs. (Charles) Onasch and (James) Evans, emphasized the importance of being a well-rounded geologist,” he said. “And this geology department is one that has always led the way on incorporating new technology into traditional field and lab work.”

“I thought, ‘I don’t know what’s going on here, but these are clearly volcanoes.’”

By the time he graduated with a major in geology and a minor in astronomy, Michalski had also learned to use telescopes, computer models and theoretical science in combination with chemistry and geology to study the stratigraphic history of Earth  —perfect for a “kid who loved astronomy and space,” he said, noting that before he came to BGSU he wasn’t even aware that one could study those things.

Michalski has had an unlikely career for a boy from Chardon, Ohio, considering that, growing up, he never planned to attend college. Although he described himself as “not a very good student in high school,” he admired his brother, who was going to school in Dayton, and decided to apply to college himself. “My brothers Dan and Mike have always been my heroes. I’ve learned so much from them, on many levels.”

Having no idea what he wanted to study, and not even being aware of what you could study, he took a class with Onasch, then chair of the geology department, and “fell in love with geology. Dr. Onasch was probably the first science teacher I ever had who put the effort into teaching well. As a result, what he teaches makes sense, and more importantly, one can see the relevance of the science,” Michalski said.

Among his classes with Onasch was one in structural geology, in which they studied the movements of the Earth’s crust and the remaining evidence of past activity, such as faults and folds — Michalski little dreaming that field would come into play much later in his career.

“Joe was what I call an aggressive learner,” Onasch remembered. “He always asked questions in class and came up afterwards to talk more about what was covered. In the field (class field trips and the summer field geology course), he would always be at the front of the group at an outcrop, where many students would tend to hang back and fade into the crowd.”

After graduation, Michalski worked for a year as a geologist with a Sylvania, Ohio, company, but decided to pursue his education further. He was thrilled when he was accepted at Arizona State University (ASU), he said, where he had especially wanted to attend because of its involvement with the new Mars science studies.

“The (Mars) Rovers were in the pipeline, and they (those at ASU) were working on instruments onboard the spacecraft then in orbit around Mars, and were developing another orbiter,” he said.

“For someone who lived and breathed geology and astronomy, getting in was a big break,” Michalski said. “I credit them with being willing to take a chance on somebody. I remember talking to Dr. Phil Christensen, who was the principal investigator on four different instruments sent to Mars, in his office one spring morning in the year 2000. He said, ‘Joe, if you want to make it in this field, you have to be obsessed with the science. There are so many good people out there. … you have to want it more than anything else. If not, there is no chance.’ I knew at that point that I could do it, even though the point of the conversation was that he didn’t think I could (at that time). I knew I had the thing that doesn’t show up on resumés: desire.”

Studying classical geology with Dr. Steven Reynolds to deepen and focus his studies, he received his master’s in geological sciences in 2002 and then proceeded on to a Ph.D. in 2005 under Christensen and Dr. Tom Sharp.

"I knew I had the thing that doesn’t show up on resumés: desire."

It was at ASU that he learned another valuable skill from a faculty mentor. The late Dr. Ronald Greeley, a planetary geologist, taught him and Bleacher to “always be very critical of everything we saw,” he said, a habit of thinking that contributed to the two co-authors’ openness to other interpretations of the Mars data. “We wanted to dedicate the paper to him but they don’t let you do that,” Michalski noted.

After receiving his Ph.D., Michalski had postdoctoral positions at the Mars Spaceflight Facility at ASU and at the Jet Propulsion Lab in California where he worked on landing site selection for the Curiosity Rover, which is now rumbling over the Martian surface. The next year, he joined the Institut Astrophysique Spatiale, the French space agency, in Paris, for three years before moving to London to work in the Natural History Museum.

Today, despite the important discovery about the Mars volcano, Michalski is still most interested in learning more about the mineralogy and geochemistry of clay minerals on Mars, which he describes as “important and complicated” as they relate to the planet’s development.

Michalski’s position as a research scientist with the Planetary Science Institute, in Tucson, allows him the “freedom to move around and ask questions,” he said. And while there is a personal price to be paid in pursuing his scientific curiosity in other countries and other institutions, he finds his research most compelling and rewarding.

“Too many people tell you why you can’t do things,” he said. “I think one of the greatest lessons one can learn is how to ignore people. My best advice for younger people coming through the system at BGSU now is this: you have to seize your education and create your own opportunities. All of the luckiest people I know tend to be the ones who work the hardest. Funny that.”