A Bowling Green State University scholar and a dedicated group of students have spent eight months immersed in the ancient world of Babylonia — not the succession of kings or the politics of the day, but in the small figurines that were immensely popular at the time and that may provide a glimpse into the identities and values of those who created and collected them.

Peoples’ fascination with tiny things goes back centuries, as the exhibition called “Life in Miniature: Identity and Display at Ancient Seleucia-on-the-Tigris" at the University of Michigan’s Kelsey Museum of Archaeology demonstrates. Thanks to the scholarship of Dr. Stephanie Langin-Hooper, an assistant professor of ancient art history at BGSU, and the students’ work, scholars and the public are getting a look at the small artifacts, most of which are being shown for the first time since they were excavated from what is now southern Iraq, near Baghdad, in the 1920s and ’30s by a team from the University of Michigan.

The Toledo Museum of Art provided some of the funding for the expedition, and in return received a proportionate amount of artifacts, which it had never exhibited but now has given in a loan-to-transfer to the Kelsey, with the understanding that they be made accessible and used for educational purposes. About 200 of the 734 Toledo Museum objects are in the current exhibit.

“Life in Miniature” has been on display since Dec. 20 but had its grand opening Jan. 24, when Langin-Hooper gave a lecture titled “Miniatures in Life: The Role of Tiny Objects in Everyday Worlds.” On hand were graduate art history students Cathie Moore and Mariah Postlewait, and undergraduates Jessica Pfundstein and Julie Knechtges, who helped design and mount the exhibit; and Master of Fine Arts in digital arts students Kevin Kately, Colleen Murphy and Haining Yu, whose animations have helped bring the miniatures to life for visitors. The museum is at 434 S. State St. in Ann Arbor. “Life in Miniature” runs through April 27.

Langin-Hooper not only shares the ancient world’s love of miniatures, she is an expert on those from the Hellenistic period, about 300 B.C. to about 200 A.D. — the era of the Kelsey items — and wrote her Ph.D. dissertation on the topic. So it was a natural, when the Toledo Museum transferred objects from its collection to the Ann Arbor museum, that she was invited by the Kelsey to be guest curator, in partnership with Kelsey curator Dr. Sharon Herbert, to design a show that highlights the scholarly focus of the reunited artifacts. Langin-Hooper was already familiar to the museum, having given talks there previously.

“It was a fortuitous thing all around, and quite amazing,” Langin-Hooper said. “It was a tremendous experience and wonderful for my own scholarly growth to work with the objects firsthand.” 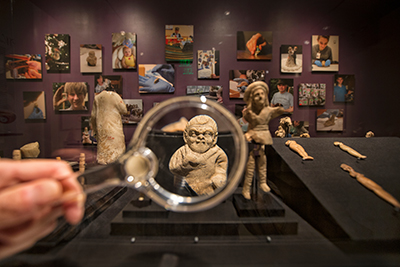 It was equally enriching for the students, they agreed. Moore, Postlewait, Pfundstein and Knechtges worked as collections-management and exhibition installation interns from May-December 2013. Each of the four logged over 200 hours while completing the hard work of assisting with exhibition design, text label writing, gallery renovation, and object installation for the exhibition. They worked closely with the museum’s registrar and other staff members.

“All fall they drove up to Ann Arbor with me every Thursday, from 7 a.m. to 6 p.m.,” Langin-Hooper said. “That’s a lot of unpaid dedication.”

It was, Moore said, but now that it’s over, she misses the camaraderie and intensity of the experience, which “opened up the possibility of museum work for me, something I hadn’t considered before.” She also discovered “the positive aspect of group work,” which she attributed in part to Langin-Hooper.

“Stephanie’s passion kind of seeped into and spread to all of us,” Moore said.

Even what could have seemed a tedious job of fabricating mounts for all the 400 pieces instead became a challenge to be met, Moore said. “We had to think outside the box about how to make the object not only secure but aesthetically pleasing.”

This involved using archival materials such as wire, fabric and glue, and knowing each object’s weak points so it could be well supported.

“It was exhilarating and a little scary” to be working with the ancient objects, said Postlewait, who is also a photographer. To put the artifacts in context, she created a photographic installation display juxtaposing images of people holding their own contemporary miniatures (things like Christmas ornaments, refrigerator magnets and wedding-cake toppers) with photos of Kelsey staffers holding the ancient artifacts. The exhibition also includes a display of modern-day miniatures, such as dolls and collectibles, that bridges the gap between past and present, encouraging visitors to reflect on how our own society also creates a “life in miniature.” 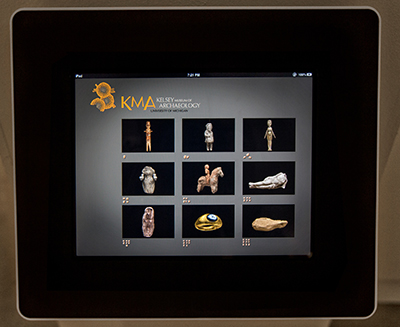 “There can be a disconnect between people of today and people in the ancient past,” Postlewait said. “We tend to think of them as inferior, but with the exhibit we wanted to draw connections between people by showing universal things in everyone’s lives, and miniatures are one of those things.”

In addition to the contemporary photos, Postlewait selected photos of the excavation from the 1930s, from the museum archives, to provide historical context to the provenance of the miniatures.

“These internships provide invaluable career preparation for these students as they prepare for future work in the art history/museum field,” Langin-Hooper said. They will also have impressive pieces for their professional portfolios, and they and future students can benefit from the connections established between BGSU and both the Kelsey and Toledo museums.

Personal connections to this exhibition have fueled a passion for creating the best possible experience for museum visitors, Langin-Hooper said. Moore is also a U.S. military veteran of the conflicts in Iraq and Afghanistan, and Knechtges has been on an archaeological excavation of an ancient Mediterranean site.

“These internships provide invaluable career preparation for these students as they prepare for future work in the art history/museum field”BGSU digital arts students contributed their skills to give visitors an even greater engagement with the objects, many of which had jointed legs or arms that could be moved. Kately, Murphy and Yu, under the supervision of digital arts faculty Thomas Huang, created animations and an iPad interface that museum visitors can use. The “objects will move in the same way(s) that they did for their original owners approximately 2,000 years ago,” the Kelsey press release noted.

“Multimedia is increasing everywhere, and is especially helpful in museums,” said Murphy, a second-year graduate student from Vermont. “It’s a different way of looking at digital art. The animations help bridge the gap between the cold objects behind glass that can seem a bit precious, and visitors can feel much closer to them.”

Among the nine objects chosen for the animations are a man on horseback (to which the team took a more light-hearted approach that children could especially enjoy, Murphy said), a puppet-like man on a string, a lamp, a ring to be used for sealing clay, and a woman with a moveable arm.

Kately recreated each digitally with a focus on complete realism, Murphy said. “Whether they were made of bone or clay, for example, he tried to get the texture and color as indistinguishable from the original as possible.” Murphy then took the digital images and constructed riggings, or skeletons, from which to make the objects move. And then Yu created the iPad app and designed the interface with the museum to be consistent with its look and standards.

“It was a delicate balance between science and art,” Murphy said. “We couldn’t assume anything about the objects and had to take a very strict approach to how we represented everything.

“In the end, we impressed ourselves,” she said, laughing. “It was a very fulfilling class for all of us.”

“These animations have already been receiving rave reviews by visitors to the museum,” Langin-Hooper reported.

The Seleucia-on-the-Tigris objects will also provide ongoing opportunities for BGSU students to work with the Kelsey Museum, one of the best archaeology museums in the United States, Langin-Hooper said. Her Professional Practices in Art History class this spring will be designing, curating and installing three drawer displays in the Kelsey Museum's permanent galleries based on the artifacts.

In addition to providing unprecedented opportunities for BGSU students to be engaged with archaeological museum work, the “Life in Miniature” exhibition at the Kelsey Museum is also a major contribution to the scholarship of Hellenistic Babylonia.

“The exhibition is formulated around a new body of theoretical work in archaeology that examines why societies create, use, and are fascinated by miniature objects,” Langin-Hooper said. “To my knowledge, no museum exhibition has been organized around the theoretical topic of miniaturization before, so this exhibition breaks new ground on conceptual and disciplinary levels.”

“Seleucia-on-the-Tigris is in an incredibly famous and important part of the world,” according to Langin-Hooper. “It was the capital city of the Seleucid Empire, the Hellenistic Kingdom founded in the Middle East by one of Alexander the Great's generals. It was a city of great kings, and the richness of the artifacts found there (even the miniature ones) attests to the once-flourishing prosperity of this royal capital.

Working on the exhibit was a deep learning experience, the students agreed, and they expressed a tremendous sense of accomplishment for having been a part of presenting this fascinating culture and its tiny objects to the public through the “Life in Miniature” exhibition.

As Moore said, her “peak moment was probably when we came to the museum one day and saw the exhibit banners on the street on the light posts. It was so exciting, and it felt like we were a family.”