Bouzat on Darwin’s ‘One Long Argument’ 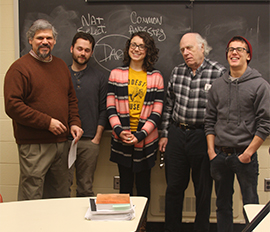 Feb. 12 is the birthday of two figures of great historical importance: Abraham Lincoln and Charles Darwin. While Lincoln’s birthday is now observed with that of George Washington on Presidents’ Day, Darwin Day is celebrated by scientists and evolutionists around the world to honor the creator of a biological theory of evolution and the contributions of science to our understanding of the natural world.

At BGSU, Darwin is of particular interest to Dr. Juan L. Bouzat, biological sciences, and students from two cross-disciplinary graduate seminars he co-taught with Dr. Michael Bradie, a professor emeritus of philosophy known for his work in the philosophy of biology. From the classes’ discussions of the theories of Darwin and his contemporary Alfred Russel Wallace, Bouzat developed a paper in which he reviews Darwin’s own perspective on what he described as “one long argument” on the origin of species.

Bouzat’s article, “Darwin’s Diagram of Divergence of Taxa as a Causal Model for the Origin of Species,” just published in the March edition of The Quarterly Review of Biology, posits a way of understanding Darwin’s theory that differs from the traditional view.

Scientists and philosophers are still debating Darwin’s “one long argument,” as he referred to his seminal 1859 book “On the Origin of Species,” in which he laid out his theory of evolution, with its twin strands of the common descent of organisms and the process of natural selection as the means for diversification of species.

Bradie does not agree at all. “The two components are clearly logically and causally independent,” he maintains. “The question is: how did Darwin think about their connection? The textual evidence is, I think, inconclusive; Juan thinks otherwise. This is one aspect of a wider question, namely, what did he mean by saying that his book, the ‘Origin of Species,’ was 'one long argument?' There is no general consensus among either biologists or philosophers about what that 'one' argument is or, indeed, whether there is only one argument or many.”

Bouzat interprets the one illustration Darwin provided in the book, “Diagram of the Divergence of Taxa,” a tree figure showing the branching of the species, as a conceptual model for his theory of evolution and evidence of what Bouzat believes to be the evolutionist’s perspective on the relationship of natural selection and common ancestry and that the “one long argument” was Darwin’s way of describing natural selection as the causal mechanism for the origin of species.

In his paper, Bouzat acknowledges the contributions of the students and Bradie to the development of his interpretation.

“We did argue in class about this and other issues and, as is typical of controversial issues, the students were divided,” Bradie said.

Bouzat added that “seminar courses can provide a great opportunity for students to develop critical-thinking skills and learn how to question their own as well as other people’s arguments. What better place to do it than in an open forum in which not only students but professors disagree?”

The interpretation of Darwin’s “one long argument” will undoubtedly not end here, and students at BGSU and around the world will continue to celebrate the achievements of Darwin even as they ponder their meaning.