“The exposure I had to projects and internships I obtained through BGSU helped me greatly”When you think of service projects, building a house, raking some leaves or painting a fence for someone in need might come to mind. But what about carrying bags of sand or buckets of water from a river in the Amazon? Kendra Simon ’04 got to experience that and much more after being chosen as one of 30 Disney company employees who embarked on a service global volunteer trip to Ecuador.

“It was incredible, an absolutely amazing time,” she said. “It was what I expected and more.”

Simon is part of a management team for commercial operations at ESPN, which is owned by Disney. She was hired right after graduation in 2004 when she received her bachelor’s degree in public relations.

“The exposure I had to projects and internships I obtained through BGSU helped me greatly,” she said. “Not only were those projects required for graduation but the experience gave me good life lessons that I’ve taken with me.”

Disney coordinated the out-of-country service trip with the nonprofit group Me to We in celebration of its 30th volunteer anniversary. The goal of the trip was to build a new classroom for village children.

“My father passed away unexpectedly in 2005 from pulmonary emboli and I found this organization that offers support for unmet needs by focusing on advocacy and public awareness,” she said.

Once Simon found out she was selected for the eight-day service trip, she immediately began preparations. “I spoke with friends at ESPN who are from Ecuador to learn more about the culture and brush up on my Spanish skills,” she said. 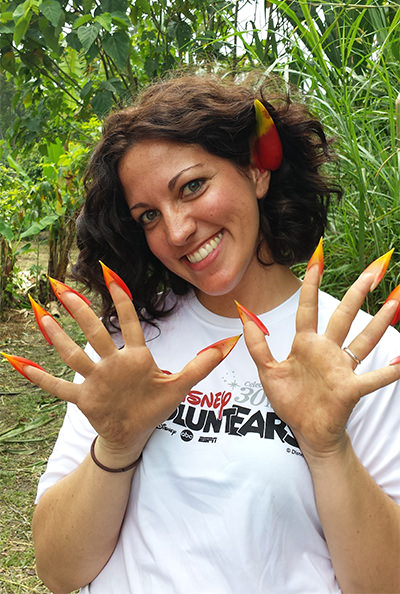 Simon arrived in Ecuador on Nov. 9, 2013, and had to immediately adjust to a different way of living. Me to We has its own lodge near the build site where it houses its volunteers. The lodge has no electricity or running water, and the only transportation is by boat.

“We had a generator that ran from 6-10 p.m. so we could charge our cameras and phones, but that was it,” said Simon.

The Me to We staff also prepared all of the meals for the volunteers, using local produce, fish, rice, beans, plantains and other local foods. “Lunch and dinner always started with soup. And even though it was 95 degrees, we loved having the soup. It was delicious,” said Simon.

The classroom project she worked on had already had its foundation set by a previous volunteer group. Her group worked on the exterior walls.

“We did everything from hand sawing rebar to filling and carrying bags of sand. It was a lot of manual labor,” she said.

During construction, the village sent in a group of community leaders made up of one person from each household to work alongside the volunteers to make sure the project would meet its deadline.

“Not all of the community members had a child that would attend the school so they may not have necessarily reaped any of the rewards of it, but as a community there’s such a bond and so much faith that they see it as their obligation and commitment. It was really inspiring for sure,” Simon said.

What also inspired Simon was the villagers’ simple way of life.

“The children are barefoot, they’re climbing on rocks, their homes have no exterior or interior walls, it’s an aluminum roof over their head. But they couldn’t be any happier and they work so closely as a community and have a bond that’s really amazing,” she said.

The villagers themselves were gracious toward the volunteers. Simon described how something as simple as a ribbon-cutting ceremony for a previously completed classroom became one of the highlights of her trip.

“The president of the school cut the ribbon into small pieces just to ensure that every single one of the 30 volunteers had a piece of that ribbon to take back as a souvenir and thank you,” she said.

Simon’s group left its own mark on the newly constructed classroom. They painted a mural using each of their hands as leaves on a tree to represent the Amazon theme. “It looked really amazing when it was completed,” she said. 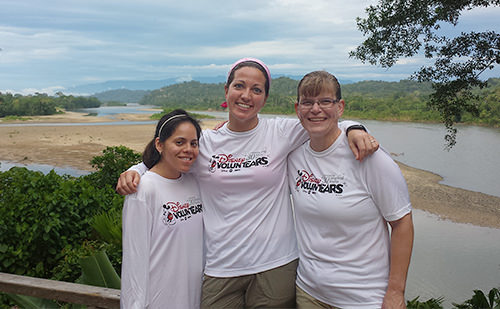 Besides building a new classroom, Simon got to experience life in the indigenous communities. She and the other volunteers taught English to some of the classes and volunteered at local farms.

“We worked at a cacao farm and harvested cocoa beans,” she said. “We even got to grind them up to make chocolate. We also worked with the women in the villages, where they showed us how they create beautiful jewelry out of palm leaves.”

Simon enjoyed getting to know the children in the villages, who were excited to welcome their new visitors. She said the children escorted them to and from the riverbank while they filled wheelbarrows with sand, and waited for them while their boat arrived from their lodge.

“We taught them how to play London Bridge and they all loved it. But instead of trying not to get caught when the bridge falls down, they were all trying to get caught!”

One little boy in particular who didn’t speak any English made quite an impression on her. “The London Bridge game had long been over, and all of a sudden, he starts singing it in tune, with the correct words and everything! He was obviously just mimicking us but I couldn’t help but smile from ear to ear because he just retained it so quickly,” she said.

When asked if she’d go on this trip again, Simon said, “Absolutely, I’d do it again. I would be so interested to see what the kids remember from our trip there and to see the progress they’ve had. To go to a region that I’d never go to otherwise, it was just amazing.”

Simon and her husband, Curtis ’04, are Falcon Flames. Her mother-in-law, Joan Simon, is the administrative secretary for Dean Ray Braun in the College of Business.