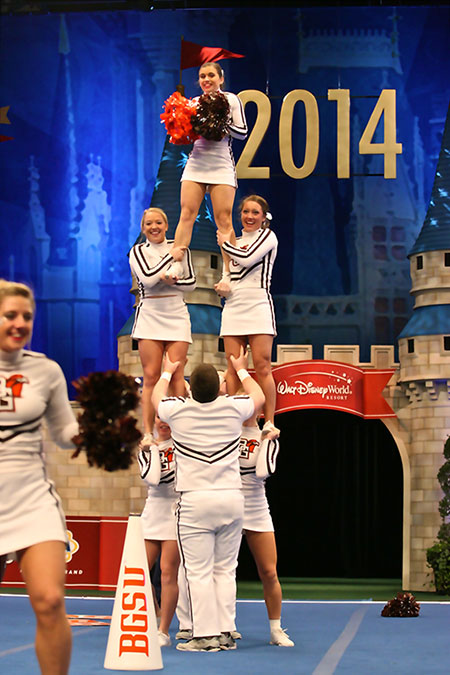 “I knew this team was willing to work hard and accomplish our goal,” said Head Coach Anne Marie King. “We strive to improve each year as a program and winning the national championship was the next step in our success.”

The Falcons' top finish at the annual competition in Orlando, Fla., is the highest a Mid-American Conference school has ever placed. It is the fifth consecutive year the BGSU squad has placed in the top five in the country. Last year the squad finished second, losing to Hofstra University by just 0.7 points.

“I have never been part of a team with so much determination and heart,” said Katie Begin, a junior from Dearborn, Mich. “Our team goal was to hit a clean routine and we did that. I'm so proud to say I am a Bowling Green Falcon.”

The team was ranked third after the semifinal round where they competed against 21 top programs in their division including Purdue, San Diego State, Rutgers, Colorado State, George Mason, Syracuse and Hofstra.

“This has been such an amazing experience,” said Drew Ashby-King, a freshman from Auckland, New Zealand. “As a team we put in so much hard work in and out of practice and it paid off.”

The University’s all-girl cheer squad and the dance team also competed in the event. The all-girl squad placed ninth in the semifinals in their division. The dance team placed in the top 20 in Jazz in Division 1A.

The event will air on ESPN later this spring.