Baron book serves up study of food in film

BOWLING GREEN, O.—Mention that you’re writing a book about food and film, and nearly everyone can instantly reel off favorite scenes involving food in movies, or documentaries about food that have had an impact on them, said Dr. Cynthia Baron, an associate professor of theater and film at Bowling Green State University.

It was the same for Baron and her co-authors Drs. Mark Bernard, a BGSU doctoral graduate now teaching at the University of North Carolina, Charlotte; and Diane Carson, a professor emeritus at St. Louis Community College. The more they thought about the topic, the more connections they began to see, Baron said, and the more broad the eventual book became. 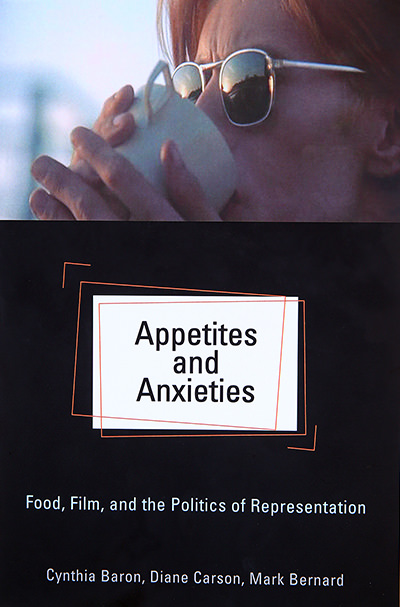 “Appetites and Anxieties: Food, Film, and the Politics of Representation,” published by Wayne State University Press in 2014, looks at topics as diverse as ways in which films use food as a means of creating community to those that use food as social critique, to cannibal films that express our deepest social taboos, to documentaries about food production and what we consume.

Baron will be signing copies of “Appetites and Anxieties” following a talk on “Food, Film, Women’s Studies, and Women’s Cinema” at the Women’s Center Friday (Jan. 31). Her presentation begins at 1 p.m. in 107 Hanna Hall, and will feature clips from American and international movies.

In writing the book, “We wanted to prepare a ‘banquet’ for everyone,” Baron said, to provide entry points to thinking about food and film for readers from the undergraduate to the film scholar. “We are in a food- and media-saturated environment, and of course that’s reflected in films,” she said.

But the central paradox, expressed in the book’s title,” is the “promise and threat” posed by food — in life as in film. “Appetites and Anxieties” studies how films use food to express both.

“Food behavior in film is a good way of tracking our wider beliefs: who we are as a people, what we value or don’t, things we like to talk about and things we don’t like to discuss,” Bernard said.

A specialist in horror films, Bernard contributed the chapter on cannibal films, which include the iconic “Texas Chain Saw Massacre” and the science fiction “Soylent Green.” In the first, people become cannibals when they lose their jobs and are stranded; in the second they are unknowingly eating food made from humans.

“Sometimes the only way we can face up to the questions about our beliefs and their ethical implications is by presenting them as fantasies,” Bernard noted. “These films can serve as allegory, whether they were intended to or not. The book takes this conversation about food and films you’d initially think about as food films and offers a whole new way of looking at them.”

A chapter on the food and film industries reveals the political economy approach in commercial films as it examines the industries’ policies that determine representations of food in film, along with tie-ins to specific products. It is no accident, for example, that when superhero Iron Man escapes his Afghani captors, his first stop is at Burger King for a cheeseburger.

As a film scholar and as a cultural anthropology scholar, in her past work Baron has been engaged in creating a vocabulary “for discussing things in the frame that are so meaningful but that can be overlooked because they are so familiar,” she said. “Terms, concepts, principles and patterns — major factors that shape the ways things we see and don’t see.” Turning that lens on food in film has been revealing.

A seminal moment in framing the book’s approach came when Baron participated in a National Endowment for the Humanities-supported “foodways” project of former BGSU faculty member Dr. Lucy Long. Foodways looks at food from its procurement to its preparation, presentation, consumption, disposal and cleanup. Baron began thinking of the ways in which food is depicted in film, realizing that which parts of the process are included and which are not seen can be telling.

This approach “has opened up a whole new avenue of scholarship and research that I’m interested in,” Bernard said, and broadened “the discussion to include a lot more films.”

Foodways are naturally most explicit in documentaries about food and its production. For Bernard, watching and writing about these documentaries “was the most transformative experience in my life. I became a vegetarian. It’s rare that you can say that about your research.”

In researching food and water documentaries, Baron discovered they were a crucial part of American documentary history, going back as far as the 1936 government-produced documentary “The Plow That Broke the Plains,” which ran afoul of big business by its portrayal of unsustainable farming methods as partly to blame for the Dust Bowl. Some of today’s food documentaries, such as “Super Size Me,” about McDonald’s, have had a significant impact on consumers, while others represent the committed efforts of the filmmakers but often do not receive wide distribution.

The grandchild of Iowa farmers, Baron feels a strong connection to the land and said she developed a great deal of admiration for those dedicated documentarians whose goal is to “bring the farmers and the eaters together.”

The book is illustrated throughout with photos and examples from movies. Four appendices provide insights from a food stylist, a selected filmography of fiction films and a filmography of documentaries that feature foodways components, and a list of selected works in food and cultural studies.