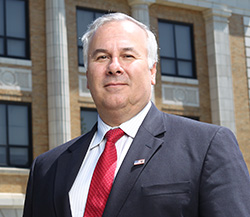 As driving rains, pounding surf and howling winds from Hurricane Sandy converged on the town of Ho-Ho-Kus in northern New Jersey, residents were ordered to evacuate. However, as a lieutenant in the Volunteer Ambulance Corp., emergency medical technician (EMT), and a member of the community Office of Emergency Management (OEM), First Responder Gordon Hamm ’87 needed to stay and face the forces unleashed by Mother Nature and all the ensuing havoc.

The eye of the storm came through just 40 miles south of Hamm’s town and pummeled the borough of just over 4,000 residents. Scores of fallen trees and downed power lines littered the streets after Sandy roared through the community. Despite evacuation orders, many residents, especially senior citizens, had remained in their homes.

With more than 99 percent of homes without power, Hamm and other volunteers had their work cut out for them. During the first 24 hours of the storm, distress calls came every five -10 minutes. As trees started to fall — pulling down power lines at an alarming rate and falling onto, and into, homes — the calls to evaluate and provide assistance came one after another and continued for days as the hurricane was followed by an earthquake and Nor’easter.

“We needed to assist the homeowners immediately, many were elderly, scared and without power or heat. It was like a war zone.  Teams directed by OEM responded to emergency calls, performed medical assistance, transported people to hospitals, evacuated many senior citizen centers, delivered oxygen to homes for people that had no means to get their normal deliveries, and cooked and delivered food to shelters and homes,” said Hamm. He worked with many other first responders for nine solid days to keep people safe, fed and warm as the town remained without power, food supplies dwindled and cold weather settled in.

In addition to emergency assistance, Hamm and his wife Laurie ’89 opened their home to dozens of people who were grateful for air mattresses, sleeping bags and the meals Laurie prepared. “We were one of the few homes that kept our power,” explained Laurie. “With so many people in such dire circumstances, it just seemed like opening our home was the right thing to do.”

The Hamms, who are involved in the restaurant industry, joke that they now know what it feels like to operate a Bed and Breakfast.

Those that know the Hamms are not surprised by the generosity and support the couple exhibited during and after the storm. “I have always felt that Laurie and Gordon are wonderful examples of balancing family, business and community,” said Tim Koder, BGSU interim vice president of University Advancement. “They have taken that to new heights with their willingness to go beyond the call of duty to help their neighbors.”

Gordon’s work as an EMT grew from his community involvement on city council. When his council term ended, he agreed to help drive for the Volunteer Ambulance Corp. Within months he decided to return to school to earn his EMT license. Hamm had already achieved great success in the business world as the founder of Independent Computer Consultants and partner and CEO of Garage Management Corporation, a $150 million parking/real estate company in Manhattan with more than 70 locations, a child development business called Kidville that is now international with locations in China, Dubai and the U.S., and several restaurants in the New York City tri-state area.

However, Hamm said returning to school as an adult was a challenge. “I had to still attend to my businesses during the day and then attended evening classes and studying during lunch,” he said.  When the teacher approached him and asked “Sir, can you help with this?” Hamm could only laugh since he was one of the oldest students in the class and everyone thought he was the teacher.

Hamm first put his emergency response skills to use during Hurricane Irene last year, so he felt better prepared for this storm. “I am grateful that our community didn’t experience any loss of life and that we were able to help the many people affected by the terrible storms. We could not have done any of this without the help of so many other first responders that came out to help their neighbors and friends. You really get to see the best in people when it really matters. I wish I could thank them all,” he said.

Kayla Cyr, a junior in BGSU’s College of Health and Human Services, agrees that the desire to help others brought out the best of many people after Hurricane Sandy.

After listening to news coverage about the devastating effects of the storm, Cyr decided she needed to do something to help. She contacted numerous agencies to find out what was needed, then worked through her nonprofit agency, Kayla’s Community Closet, to organize fundraising and donations in her community of Castalia, Ohio. The response was overwhelming as friends and neighbors filled Cyr’s grandparent’s garage with donations.

Her mom joined her for the drive to hard-hit Oakwood Beach in Staten Island over the weekend preceding Veteran’s Day.

Did Hurricane Sandy affect you or your community? All of us from the BGSU community would like to hear from you. Simply use the commenting tool below to add your story.