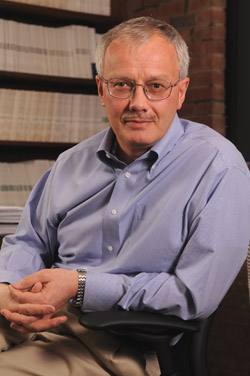 BOWLING GREEN, O.—Bowling Green State University will host Sir Peter Crane, Carl W. Knobloch Jr. Dean of the School of Forestry and Environmental Studies at Yale University, as the 2012 McMaster Visiting Scientist for three days of campus activities. Crane’s work focuses on the diversity of plant life—its origin and fossil history, its current status, and its conservation and use.

He will give a public lecture on “The Future of Plants” at 4 p.m. Wednesday (Sept. 26) in the Bowen-Thompson Student Union Theater, followed by a reception in the foyer. Plants are indispensible to human survival and provide us with food, medicines, and a variety of raw materials. They are also important regulators of ecological processes at global to local scales. However, relatively little attention is paid to how these crucial global resources, accumulated over more than 450 million years of evolution, will be managed for the future. Crane’s lecture will explore the current status of plant diversity and consider some of the challenges in conserving and managing plants in sustainable ways for human benefit.

In addition to his Wednesday lecture, Crane will meet with students and faculty on Thursday and Friday, including a technical seminar, "An Update on the Early Evolution of Flowering Plants," and a discussion of one of his papers, “Diversity in Obscurity: Fossil Flowers and the Early History of Angiosperms” (Philosophical Transactions of the Royal Society 365: 369-382), with students in a Plant Taxonomy and Evolution class.

From 1992-99, Crane was the director of the Field Museum in Chicago. In 1999 he was appointed director of the Royal Botanic Gardens, Kew, one of the largest, most prestigious and influential botanical gardens in the world. There, along with other programs in plant conservation, he worked on the initial establishment of the Millennium Seed Bank. He returned to the U.S. in 2006 as the John and Marion Sullivan University Professor at the University of Chicago before being appointed at Yale in 2009.

Crane was elected to the Royal Society — the U.K. academy of sciences — in 1998 and was knighted in the U.K. for services to horticulture and conservation in 2004.

The Harold McMaster Visiting Scientist is underwritten by a $250,000 endowment funded by Helen and the late Harold McMaster. The longtime BGSU benefactors, from Perrysburg, funded the interdisciplinary program to bring eminent scholars or practitioners from the fields of chemistry, biology, geology, physics or astronomy to the University annually. The visiting scientist delivers a public lecture and interacts in classes and small groups with undergraduate and graduate students, faculty and members of the community.