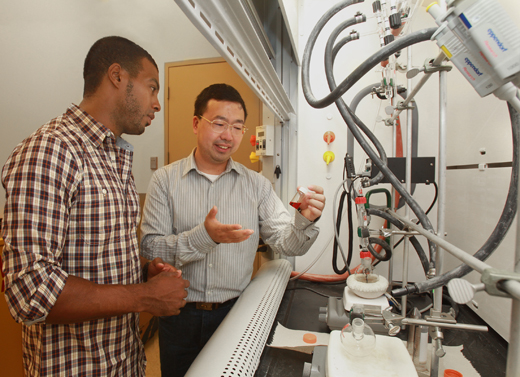 BOWLING GREEN, O.—A new process developed by Dr. Liangfeng Sun and his coworkers holds promise for improving the production and capabilities of the infrared light emitting diode, or LED, for use in technologies ranging from communications to night vision devices used by the military.

Sun, a Bowling Green State University assistant professor in physics and astronomy and member of BGSU’s Center for Photochemical Sciences, was the leader of the National Science Foundation-funded project when he was at Cornell University. With his Cornell team members, he created infrared LEDs in the lab using nanocrystals in solution, which has produced record brightness and better performance at a dramatically lower cost.

Their work was featured in a recent issue of Nature Nanotechnology, the leading journal worldwide in the area of nanotechnology. Sun will also give a presentation on the team’s achievement at the conference of the Materials Research Society in Boston this November, while the follow-up research on the nanocrystal-based LEDs continues in his lab at BGSU.

The ingredients in Sun’s formula are among the tiniest on earth: quantum dots (also known as nanocrystals) in solution. Quantum dots are a new material in nanoscience: tiny particles of a semiconductor — in Sun’s case lead sulfide — that emit photons, which are visible to infrared cameras as light when excited.

“They possess a novel optical property that is governed by quantum mechanics," Sun explained. "The ‘color’ of the light they emit is determined by its wavelength. These are broadly ‘tunable’ to different wavelengths. We are working with the infrared wavelength, which is invisible to the human eye but has many applications."

“Why should we use infrared light for fiber optic communication? It is the most efficient; the infrared light can travel thousands of kilometers with minimal loss,” Sun said.

“We use a ‘synthesizer’ procedure,” he explained. “By mixing two precursors (ingredients) in a flask and heating it up, we can obtain bigger crystals. By varying the temperature and the length of time we’re heating the mixture, we can ‘tune’ the crystals to different sizes for different purposes.”

While these are big gains in size, the context is still minute. One nanometer (nm) is one one-thousand-millionth of a meter. “The dots are much smaller than a human cell,” Sun explained. A cell is more than 1 micron in diameter; the dots are one one-thousandth of a micron. Each LED contains millions of the quantum dots.

In contrast to the traditional LED manufacturing process used in the semiconductor industry that uses high temperatures and a high vacuum environment, the method devised by Sun is less costly, does not require the vacuum environment, and allows for greater adjustment of the wavelength to meet different purposes.

Sun began the research about five years ago as a postdoctoral researcher at Cornell University. “The success has come in the last two years. It’s an exciting achievement that we think will have a huge impact on the nanoscience community,” he said.

Sun received Bachelor of Engineering and Master of Science degrees from Tsinghua University (1997) and the Institute of High Energy Physics (2000) in Beijing, China. He completed his Ph.D. study in the University of Texas at Austin (2006).