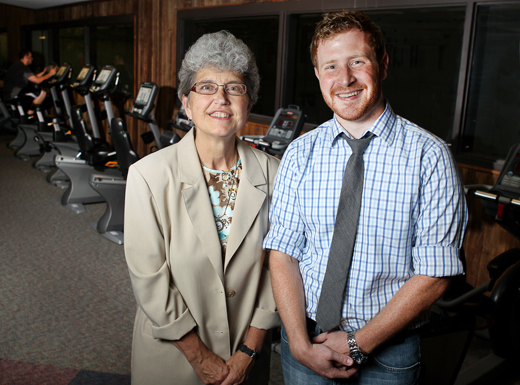 BOWLING GREEN, O.—Every day, 10,000 people in the United States turn 65. This phenomenon began Jan. 1, 2011, and is predicted to last 19 years as the baby boomers age. At the same time, people are living longer, creating a growing need for services, policies and programs that help them remain healthy, active contributors to society.

The degree is designed to prepare professionals in a variety of fields to provide services to older adults and their families, and as the basis for pursuit of a doctoral degree. The program can be completed in one year attending full time, or two years part time.

“Our focus is on helping people age successfully,” said Dr. Nancy Orel, director of BGSU’s gerontology program and MSIG graduate coordinator. The benefits extend not only to the older population but to the community as well. “Older adults tend to be the most vulnerable but also the most likely to lend assistance to others,” she noted.

With the number of older Americans doubling during the next 25 years, gerontology is a promising career for those just starting out as well as for people who have perhaps lost their jobs and need to reinvent themselves professionally, she added.

The program has broad appeal. It was approved by the Ohio Board of Regents in January and already has a number of students enrolled, including an urban fire department administrator concerned about the safety and needs of the elderly. The oldest applicant is 67, Orel said.

Quantia Bates graduated from BGSU in May with a major in gerontology and a minor in psychology. She will return to begin the MSIG program fall semester, with an eye to combining both her interests.

“I am very interested in the mental health aspect of gerontology. Eventually I would like to maybe be a gerontologist counselor for those who are mentally ill,” she said.

“Growing up I lived with my grandparents for the most part because my mom worked nights. Being able to live under the same roof as them for about 10 years was a great experience. I got love and attention from my parents but that from my grandparents was something special.

“I got to the see the good and the bad of aging, and although neither of my grandparents is living now, I have respect for older adults. A lot of people have a negative attitude toward older adults, but not me, because I was able to grow up in an intergenerational household,” Bates said.

MSIG students will choose a concentration for their studies from four focal areas: gerontology, human development and family studies; kinesiology; health promotion; or social policy and administration. They will select a capstone experience related to their area of interest and goals.

“The whole field of gerontology is by nature interdisciplinary,” Orel said.

Courses will include topics such as aging, physiology and exercise; families in later life; public health administration, and communication disorders and aging. Electives can come from the areas of sociology and psychology. Students will also be allowed to take online courses in collaboration with the University of Toledo’s certificate program in gerontology, and students enrolled in Toledo’s master of public health and occupational therapy programs can take Bowling Green’s gerontology courses as electives.

A 2008 article in Retooling for an Aging America, published by the Institute of Medicine, called for all professions to recognize the increasing rate of older adults and the advantages of obtaining advanced training for working with them.

According to the institute, only 1 percent of pharmacists and nurses and 4 percent of social workers have any training in geriatrics, and yet a large number of the people they deal with are older. “MSIG students will acquire knowledge and specialized skills for working with that segment of the population,” Orel said.

“Any student can benefit from taking gerontology courses, whether to supplement their knowledge in their own field — marketing majors who want to know how to reach the older population, for example — or to deal with their own aging parents,” she said.