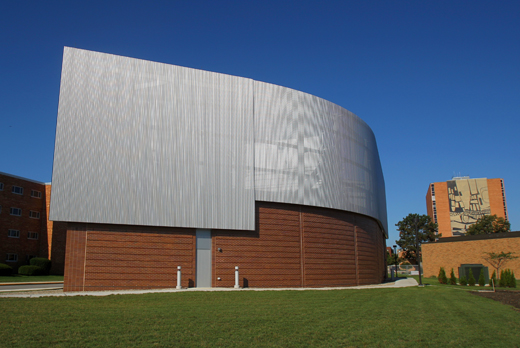 BOWLING GREEN, O.—You almost miss it, tucked in as it is between the School of Art and Conklin Hall on the Bowling Green State University campus.

When people do notice BGSU’s flowing, wedge-shaped chiller plant, it often elicits a double take and “What is that cool building?” Although the sleek metallic exterior offers no clue to what’s going on inside, “cool” is the operative word here — the plant provides cooling for the Wolfe Center for the Arts, Fine Arts Building, Moore Musical Arts Center and the Health Center.

The intriguing structure did not go unnoticed among professional architects. It won a Special Mention in the American Institute of Architects Ohio Design Awards recently and was honored with a Cleveland AIA award last year.

“It’s good to see infrastructure recognized as a positive addition to the BGSU landscape,” said Rick Ortmeyer, principal with Bostwick Design Partnership of Cleveland, which designed the facility. Bostwick has worked with BGSU on other innovative campus buildings, including the Cedar Point Center at BGSU Firelands.

Atop a base of specially made corbelled brick, a shimmering, high wall of stainless steel screening rises, allowing a partial view of the interior when viewed from certain angles. Like window blinds, the “slats” allow air to flow through the plant, preventing heat build-up inside.

“The building is responsive in an aesthetic way to what we consider an arts environment,” said University Architect James McArthur, director of the Office of Design and Construction. “Bostwick’s approach to the process validates our goal of being efficient but tasteful. Its simplicity doesn’t distract from what’s around it.”

“The specialized design conceals what is basically a mechanical room,” said Robert Boucher, senior project manager in Design and Construction and project manager for the chiller plant. “A lot of planning also went into its orientation. They looked at it in the context of the surrounding buildings and made sure it was unified in its height and its sight lines.”

“Its placement also works with pedestrian circulation,” McArthur noted, and is in keeping with the BGSU Master Plan goal of providing enhanced campus walkways and appealing outdoor spaces.

Working with a very limited budget, Bostwick focused on high-quality components. The stainless steel will not rust, and the corbelled brick adds visual depth, shadow and texture while being more resistant to decay, McArthur said.

“How the materials were used and the detail give it more architectural sophistication,” he said of the building, which could have been nothing more than a merely utilitarian facility.

The chiller plant also helps achieve the University’s goal of increasing sustainability in its infrastructure, McArthur said. Having a centralized facility for the east end of campus reduces maintenance and is much more energy-efficient. “We have one large cooling tower versus the six or seven individual building towers and chiller units we had before. And fewer people are needed to manage it.”

The building is expected to repay its construction costs in energy savings fairly quickly, McArthur said, and has the capacity to support an additional building should more cooling become needed.

It represents another step toward campus energy efficiency and sustainability while being aesthetically pleasing.