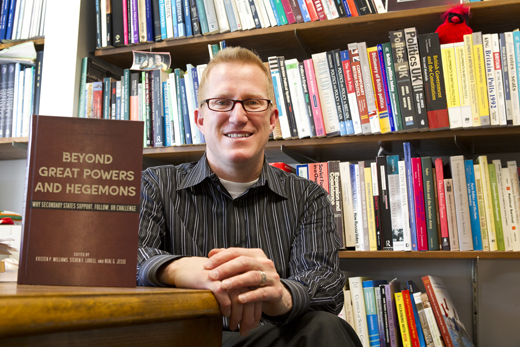 BOWLING GREEN, O.—It isn’t easy being the “little guy” among giants, whether you’re Romania or Sri Lanka. A new book co-edited by Dr. Neal Jesse, an associate professor of political science at Bowling Green State University, examines international relations from the point of view of the world’s smaller states.

“Beyond Great Powers and Hegemons: Why Secondary States Support, Follow or Challenge,” published in March by Stanford University Press, is a turnabout from the usual study of how larger states manage their relations with their peers. “We are interested in small-state reaction to large-state foreign policy,” Jesse said.

This is a “still understudied topic of immense contemporary importance,” according to Dr. David Lake of the University of California, San Diego.

Jesse, co-editors Drs. Steven Lobell, from the University of Utah, and Kristen Williams, from Clark University, and the other contributors bring their diverse research expertise to the question of what motivates smaller powers to either align themselves with, challenge or remain neutral in navigating their relationships with the hegemon.

The book has already drawn interest internationally and had strong pre-orders on Amazon before its March release. The three co-editors recently participated in an International Studies Association roundtable in San Francisco with the publisher and participants from Europe.

Part of its value is that it moves beyond the “typical Eurocentric debate” and analyzes historical and contemporary cases of predominant influence, in Latin America, the Middle East, Africa, Asia and South Asia.

“We wanted to refocus people’s viewpoints on the idiosyncratic reasons why countries choose their responses to other countries’ foreign policy goals and strategies,” Jesse said. An expert on Ireland, he has studied its committed neutral stance, which at times has frustrated the bigger powers, from Great Britain to the U.S. “There are domestic sources of Irish neutrality,” Jesse noted.

And while it is tempting for smaller states to take the “goodies” that can come from alignment with larger powers’ wishes and policies—and many do—some feel the need to assert their independence or refrain from siding with one adversary over another.

Contributor Dr. Christopher Layne, a professor and Robert M. Gates Chair in Intelligence and National Security at the George Bush School of Government and Public Service at Texas A&M University, argues that as the U.S. sees its relative status as the predominant world power waning, it will become increasingly important for it to develop an understanding of why countries craft their foreign policy as they do if we are to be successful.

And although the U.S. continues to shape the global balance of power, we must understand that countries also need to get along with their neighbors, Jesse said. In the case of South America, for instance, even though the Monroe Doctrine encompasses the continent within the U.S. realm of protection, the smaller or weaker states must still contend with powerful states such as Brazil.

“The ‘American Moment,’ from about 1991-95, between when the Soviet Union fell and China had not yet risen, was when the United States had overwhelming cultural and military power,” Jesse said, “but that moment is over and it’s now in our self-interest to not use our foreign policy as a bludgeon but to foster better international relations.”