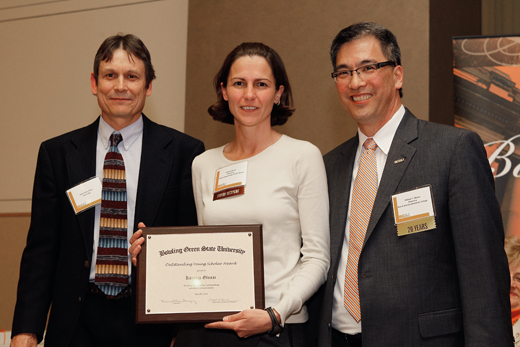 BOWLING GREEN, O.—Dr. Ksenija Glusac’s potential as a research scientist was recognized early in her academic career by national science organizations, and she has consistently proven them right. Bowling Green State University has recognized her with the Outstanding Young Scholar Award, given to enhance the academic career of junior faculty by providing discretionary funds for the support of future scholarly activities.

It brings a $1,000 credit to the recipient's discretionary research account, in addition to a $2,000 cash award. Glusac, an assistant professor of chemistry, was presented the award by the Office of Sponsored Programs and Research March 29 at the Faculty Recognition Reception.

She was nominated by Dr. John Cable, an associate professor and chair of the chemistry department, who wrote, “Since joining the BGSU faculty in 2006, Ksenija has established a vibrant and well-funded research program in the Department of Chemistry and has demonstrated an exceptional level of scholarly achievement.”

Her background in photophysics and photoinduced electron transfer helped further strengthen the research efforts of the department and the Center for Photochemical Sciences, he noted.

To support her research program, she has vigorously pursued external funding from a variety of sources. In 2007 she was awarded a starter grant of $40,000 from the American Chemical Society Petroleum Research Fund. In June of 2011 she was selected for a $550,000 National Science Foundation Faculty Early Career Development (CAREER) Award, the agency’s most prestigious award made to junior faculty, which recognizes outstanding potential for both research and education and their integration.

The main focus of her proposal was to develop and investigate new organic molecular compounds to catalyze water oxidation. “Success in this field requires expertise in a wide range of areas,” Cable said. Glusac’s group “designs and synthesizes new compounds with tailor-made properties. The design is guided by both previous experiments and theoretical calculations. Once a new compound is made, her group applies advanced spectroscopic techniques to characterize its properties. Her impressive background certainly contributes to the success she has had, but another important contribution is her ability to identify potential collaborators and engage them in fruitful collaborations. Some of her collaborators are very well established researchers in their own fields. Nevertheless, it’s clear that Ksenija is the person driving the research in new directions,” Cable said.

As Cable noted, her work is in “very timely and highly competitive areas of research. It’s hard to imagine a better position to be in at this point in time, than to be making important contributions to efforts to find renewable and non-polluting sources of energy. The CAREER award certainly recognizes Ksenija’s potential to do just that.”

Her research efforts at BGSU have resulted in the publication of 11 peer-reviewed articles in the highly respected journals of the American Chemical Society. She now has a 12th manuscript undergoing revision for publication in Nature Chemistry. “All of these manuscripts have included contributions from her graduate students and/or her postdoctoral scholars,” Cable said.

She sets a scholarly example for both the graduate and undergraduate students she has mentored in her research group. Two doctoral students have completed their degrees under her guidance and another five are in progress. She has also always included undergraduate students in her research program, two of whom are listed as coauthors on manuscripts under review or in preparation.

Glusac earned her doctoral degree in chemistry in 2004 from the University of Florida, followed by a postdoctoral appointment at Stanford University.