Going far beyond the classroom 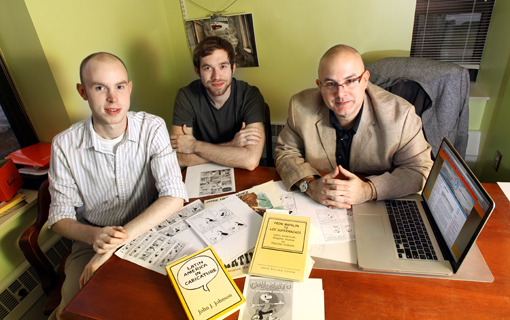 BOWLING GREEN, O.—Bowling Green State University undergraduate and graduate Spanish students are ditching the old-school format of turning in papers. Today, outstanding papers have the possibility of being published on the Blogoteca de Babel, a blog that highlights the students’ work.

The content and originality of the blog caught the attention of editors from the Peruvian magazine Artificios: sociedad, reflexión y artes, in Lima.

“I sent one of my articles to the magazine and they sent me an e-mail back saying they were interested in our students’ work,” Dr. Pedro Porbén, an assistant professor of Spanish, said. “It was a nice surprise and it was so unexpected.”

Cory Breth, Evan Virden, Pete Lockwood and Rebecca Steciw’s work will appear in Artificios. The magazine is published quarterly and will come out soon.

“Being published on the blog really boosted my confidence as a Spanish learner.”

“Being published on the blog really boosted my confidence as a Spanish learner,” Breth said. “It showed me I could write at a high level in Spanish and made me want to dive deeper into my Spanish abilities.”

One topic discussed in detail was the relationship between comics and Latin American culture, particularly how these comics establish a dialogue concerning popular culture icons such as Walt Disney, Porbén said. Breth focused on comparisons of sexuality and gender representation in classic Disney and Latin American comics. Virden discussed how many central and South American comics resulted from the influences of Disney.

Students discussed the cartoons and comics themselves, the historical contexts in which they were created and the overall cultural context, Virden said.

“[Being published] has encouraged me to read more scholarly Spanish texts, topics I’m interested in and cultural issues,” he said. “It also helps me get a better grasp on academic language and the context from which the authors are writing.”

In addition to highlighting the success of students’ work, a major impetus for starting the Blogoteca de Babel was to establish a continuing dialogue with the content of past students’ work Porbén said.

“The idea of the blog was to develop some sort of a community in the building of knowledge,” he said. “Instead of receiving knowledge from professors, students are actually building knowledge.”

The Blogoteca de Babel is a semi-annual publication of the BGSU Department of Romance and Classical Studies. Three faculty editors and one student guest editor review each issue.