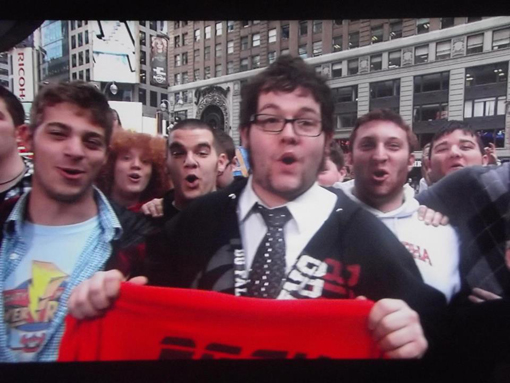 BOWLING GREEN, O.—The members of the Bowling Green State University Men’s Chorus had a busy spring break. Not only did they perform in the New York and Massachusetts areas, they capped off the week with not one, but two national television appearances.

The group arrived in New York City on March 7 and made plans to visit the set of “Good Morning America” on March 8. About 30 members got up early and found a spot in the crowd about four rows back from the front.

“We thought, well, we’re here, we might as well get noticed,” said chorus President Benji Cates, a junior majoring in music education from Mansfield. “We started singing some a cappella songs, but the lady who was the ‘crowd wrangler’ for the show didn’t seem fazed at all. But the tourists were all getting their video cameras out and taping us, they thought it was great!”

Cates says they saved one song to sing when newsreader Josh Elliott and weatherman Sam Champion came out to greet the crowd.

“As soon as they came out we started singing ‘Brothers Sing On.’ They both started gravitating towards us and said we’d be the entertainment for the weather segment.  We got pulled onto the blue carpet and stood in formation for about five minutes waiting for our cue to start singing. “

“I didn’t think we’d get on TV — the Marquette University cheerleaders were there, too, and they’re cuter than us. But we stole the show.”

Minutes after their live national debut, Facebook pages and cell phones started lighting up with messages from family and friends.

“It was crazy,” said D.J. Zippay, a junior majoring in vocal music education from Edgerton, and chorus secretary. “I called Professor Cloeter, our director, two seconds before we were on and yelled at him to turn on the TV.  While we were singing my phone was just buzzing.”

“Everyone had a ton of Facebook messages,” Cates said. “The University even mentioned us on its Facebook page. We felt really big time.”

“It was pretty awesome,” Zippay said. “I didn’t think we’d get on TV — the Marquette University cheerleaders were there, too, and they’re cuter than us. But we stole the show.”

The national exposure didn’t end there.  Cates says a producer for the ABC’s “The Chew” handed them tickets to that day’s show. About 12 members headed to the studio. This time, it was one member’s unusual hairdo that got them noticed, not their singing.

“One of our members has a crazy red afro and Carla Hall, one of the hosts, saw it,” Cates said. “During a break she came up and was playing with it and dancing with him. After the show we went up to her and started singing the same song we sang on GMA. When we were done the executive producer came up and asked if we knew ‘Danny Boy.’”

Call it the luck of the Irish. It turns out “Danny Boy” was part of their tour repertoire. They were asked to stick around for the next show taping, which would be St. Patrick’s Day themed, and sing. The show aired March 16.

“This time we were right up front.  We got a signal to stand up and just start singing and it went great.

“It was such an awesome experience to be on national television,” said Cates.