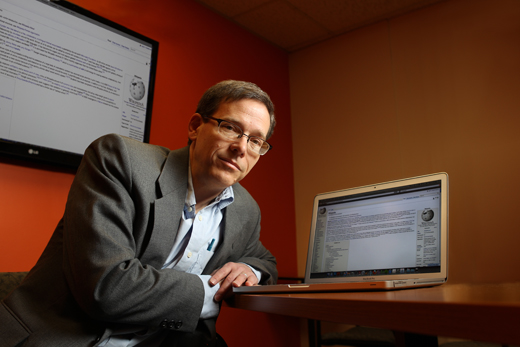 BOWLING GREEN, O.—Dr. Tim Messer-Kruse never thought his attempts to update a Wikipedia page would ignite a lively debate across the country about the merits of the online encyclopedia.

On Feb. 12, The Chronicle of Higher Education ran an essay by the Bowling Green State University professor and chair of ethnic studies called “The ‘Undue Weight’ of Truth on Wikipedia.” He documented his frustration with trying to update the Wikipedia article on the famous Chicago Haymarket riot and trial of 1886.

Messer-Kruse says he had tried in 2009 to correct a particularly misleading statement about the trial that claimed there was  “no evidence” presented by the prosecution linking any of the defendants with the bombing.

He removed a line and provided an explanation in Wikipedia’s editing log, feeling that his research and published works on the trial provided him with a measure of expertise about the topic.

He says within minutes, his changes were reversed with the explanation that reliable sources must be provided in order to make changes to an article. Messer-Kruse says he cited documents to prove his point, including verbatim testimony from the trial.

In the essay, he explains that a Wikipedia editor scolded him for trying to replace a majority viewpoint with a minority one, citing the website’s "undue weight" policy. The policy states that "articles should not give minority views as much or as detailed a description as more popular views."

“It has exposed some of the real cultural challenges between academics and Wikipedians."

Two years and one book on the trial later, Messer-Kruse attempted to edit the entry again. He says the edits lasted five minute before he was once again reprimanded for his attempts.

His essay on the experience has become one of the most viewed and commented upon articles on The Chronicle’s website. Additional outlets from The Atlantic to NPR have also picked up the debate.

“I clearly touched a nerve with a lot of people,” Messer-Kruse said. “It has exposed some of the real cultural challenges between academics and Wikipedians. Academics don’t want students to trust Wikipedia as a scholarly source, while Wikipedia sees itself as a more democratic and open option. This essay has brought a lot of those issues to the forefront for discussion.”

The Wikipedia page on the trial has since undergone several changes.

“The line about the lack of evidence has been completely removed since the essay came out. A few other volunteer editors and contributors have taken up the rest of the changes I suggested based on the research.  I was happy to see the discussion move beyond me.

“It’s interesting how Wikipedia is starting to understand more about academic culture,” Messer-Kruse explained. “The editors were faulting me for not being persistent enough in making the changes. But when I first started trying, I got into a bit of an argument with the editor to the point where he considered my changes vandalism, so I was deterred. In the academic world you are peer-reviewed and then move on; in their world they expected me to keep bashing my head against a wall. It was a real eye-opener.”

Messer-Kruse has written another book on the Haymarket Trial, this time focusing on the rise of anarchism in American. The Haymarket Conspiracy: Transatlantic Anarchist Networks will be published early this summer by the University of Illinois Press as part of its prestigious “Working Class in America” series.