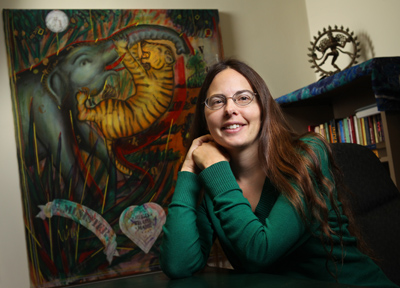 BOWLING GREEN, O.—While the United States is just beginning to enjoy television shows like “Dancing with the Stars” and “So You Think You Can Dance,” they have been popular in India since 1995, says Dr. Kristen Rudisill, an assistant professor of popular culture at Bowling Green State University. Rudisill left in January to spend six months as a Fulbright scholar in Chennai, India, to study the world of “film dance” competitions, an integral part of the Bollywood film industry as well as popular television.

“No one here talks about Bollywood as an influence, but I think it has to have played a part in the revival of interest in dance performance here,” she said, citing the movies “High School Musical” and “Chicago” and TV show “Glee” as examples.

Americans got a taste of film dancing at the end of the hugely popular “Slumdog Millionaire,” but in India every film must have multiple dance scenes interspersed, Rudisill said. “Every actor must know how to dance.” There are local school classes and studios specializing in film dance along with Indian folk and classical dance, and categories for solo, couples and even children’s dancing.

“Film dance is a hybrid of those earlier styles but is really its own style,” she explained.

She comes well equipped for the work, having spent more than two years combined in India, first during stints at the American Institute for Indian Studies in Maduri, Tamilnadu, and later as a Fulbright student scholar doing her dissertation research in comedy theatre and popular performance in Chennai, and later while beginning her examination of film dance. She received her Ph.D. in Asian Cultures and Languages from the University of Texas at Austin.

Rudisill has immersed herself in her work, learning the Tamil language as a graduate student and taking beginning film dance and other dance classes, which she will continue to do on this trip. “I want to get to know the students and ask what they expect of their classes, and observe the schools and their directors,” she said before leaving.

An affiliate of the L.V. Prasad Institute for Television and Film, she will use that connection to attend TV show tapings and interview film-dance choreographers (who are often the competition judges) and movie producers, in addition to going to as many local competitions as possible.

Chennai, with its 5-9 million inhabitants, provides rich opportunities for study, she said.