Shuttles ‘roll along’ with new look 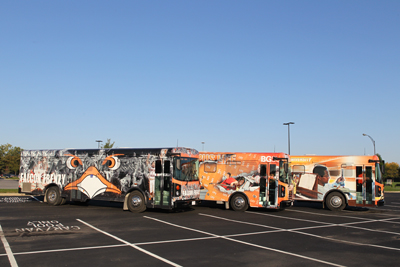 BOWLING GREEN, O.—You may have seen them cruising down the streets around Bowling Green State University— three new shuttle buses wrapped with intricate designs.  The wraps are the work of two students, Kara Smarsh and Drew Sweress.

The design process started earlier this year as a practicum assigned in Lori Young’s graphic design class. Young, an associate professor in the School of Art, then approached Sweress and Smarsh to finish the project over the summer. When Smarsh had to drop out due to an internship, Sweress stepped in to finish her design.

Each bus ended up with a specific theme— academics, athletics and student life. Sweress, a senior majoring in graphic design from Hudson, Ohio, says he’s particularly proud of the “Falcon Frenzy” bus, which features a large beak and eyes staring at bystanders.

“I felt it needed to be a little mean and domineering, but inspirational as well,” Sweress said.

The campus life bus is designed with a ripping effect Sweress originally saw on a tattoo. He utilized the same concept with students coming out of what looks like rips on the bus.

“It’s awkward at times seeing your design. I want to have the bus stop so I can get a closer look at it. I’ve never seen any of my work at that scale.

“I learned a lot about the design process and interacting with people, especially when it comes to communicating design ideas. I had always done it in class with people who knew design. I learned you have to explain ideas and be patient as you go through the process.”