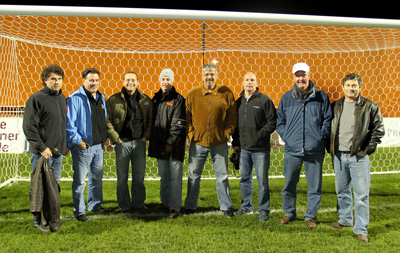 A number of men’s soccer alumni were in the crowd to witness the historic game under the lights, including Dennis Wesley, who traveled to Bowling Green from Durban, South Africa. Wesley came to BGSU in 1983 on a soccer scholarship and still holds the BGSU records for goals and points in a season.

“I contributed to the lights fund and was very excited to be there for the opening,” said Wesley. “It was very gratifying to reconnect with former teammates after 25 years and hear of their successes, which began at BGSU, as did mine.”

The Falcons will close the home portion of the schedule with another Saturday night game. BGSU will host Northern Illinois University at 7 p.m. Saturday, Oct. 29.