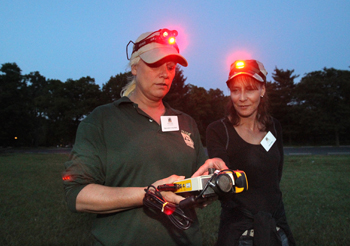 BOWLING GREEN, O.—On a hot, early June night, a group of volunteers sets out through Toledo’s Wildwood Metropark. Wearing headlamps with red lights, and well sprayed with mosquito repellent, they carry “Anabat” acoustic monitoring devices. As “citizen scientists,” they are recording bat sounds for later analysis, and will repeat the exercise in different Metroparks every other week through August.

The volunteers are part of a Bowling Green State University project to learn basic information about the nocturnal creatures such as their area populations, flight paths and foraging patterns. Back in the lab on campus, the memory cards from the devices will reveal the species of bats whose calls were recorded and their location, plus more detail.

Dr. Karen Root, an associate professor of biological sciences, and Ph.D. student Jessica Sewald, from Colorado Springs, Colo., have been conducting surveys of bats in the Oak Openings Metropark and Kitty Todd Preserve for the past three years. Now, with a $15,000 dissertation improvement grant to Sewald from the National Science Foundation and a partnership with the Metroparks, they are expanding their study. With the help of the volunteers and undergraduate biology major Christine Whorton, they hope to learn which species are using the area and their summer foraging habitat needs.

Their second, equally pressing, goal is to educate the public about the important functions bats perform and change attitudes so as to avoid posing unnecessary hazards to them, such as placing wind turbines in their flight paths.

“The average person has many misconceptions about bats, but I think if you were to ask a farmer, they would be very aware of their importance to agriculture,” Root said.

“One Little Brown Bat can eat 1,000 mosquito-sized insects an hour,” Sewald pointed out. The eight or nine species common in Ohio consume all sorts of agricultural pests in addition to mosquitoes, she said. Without bats, farmers would have to significantly increase the amount of chemical pesticides they use. In addition, Sewald said, bats are an “indicator species,” and an abundant population, or the reverse, provides important feedback on the quality of an area’s ecosystem.

“There are not many significant studies of bats in Ohio,” Root said. “When we started the project, we had no idea how interesting it would become.”

Karen Menard, stewardship services supervisor for the Metroparks, said, “We’ve had little research on bats in our Metroparks and the Oak Openings region. Knowing which bats we have and how they are using their flight corridors would shed more light on our ecosystem. It can also help us with our future land management plans.”

Recently, two new threats to bat populations have arisen: increased interest in wind turbines, and white-nose syndrome, a fungus affecting cave bats. In the first, tree bats are often struck by the turbines’ blades, which move too quickly to be picked up by the bats’ echolocation. Bats are also killed by when they get sucked into the low-pressure environment created by the blades and their lungs collapse.

“I’m very excited about engaging more of our community in scientific research, which often helps people understand and appreciate the environment even more,” Menard said.

“This is a great opportunity for conservation education,” Root agreed.