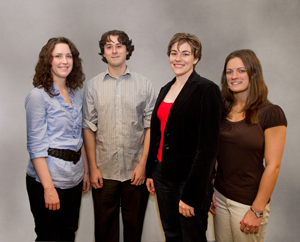 BOWLING GREEN, O.—A group of four Bowling Green State University graduate students share a unique history. They all began the master’s degree program in German at the same time, spent a year in Austria together and have all been named Fulbright Award winners.

Katie Portnoy knew at an early age she had an aptitude for languages.  She took German in high school and decided to continue studying it in college. After earning an undergraduate degree at Truman State University in Missouri, the St. Louis native headed north.  “BGSU was one of the only schools that offered the first year abroad and that’s how I ended up here for grad school,” Portnoy said.

“When I first heard that BGSU’s program was in Austria, instead of Germany, I was a little apprehensive,” she said. “The German dialect in Austria is different, but I learned to love the language there. It has a comforting feeling to it.”

Portnoy will go back to Salzburg, Austria, in the fall for her Fulbright assignment to work as an English assistant in the Austrian version of a high school. She hopes to become a translator for the federal government or work freelance.

Washington native April Reiter’s Fulbright assignment will require a bit of additional planning.  Reiter, who is dating fellow Fulbright winner George Hemphill, will be Tamsweg, Austria, far from the city Hemphill is assigned. She says they’ve worked out a plan, but it will still be an adventure.

Reiter will be an assistant English teacher at three secondary schools and plans to pursue a career in international education and/or educational publishing.

“I can't wait to see my friends again, join my Scottish Country Dancing group again, and hike the gorgeous mountains there,” Reiter said. “And how amazing is it to get paid to live abroad in a country you love and get the chance to speak a language you love every day?”

Austria is a familiar country to Hemphill. He spent time in Salzburg during his undergraduate years at the University of Maine, where he was a double major in international affairs and political science and German. He’ll spend his Fulbright assignment in Lambach, Austria.

“I look forward to not only obtaining new work experience in a foreign country by being a teaching assistant there, but also the chance to develop the contacts I have made over the previous years,” Hemphill said.

He hopes to continue his studies either in a Ph.D or different master’s program with the goal of working for the U.S. government, a non-governmental organization, or an international organization such as the United Nations.

Music is Andrea Weatherman’s first love, and what she got her undergraduate degree in at Converse College in South Carolina. An accident aggravated chronic back problems, and she chose to give up piano and look at other career options.

“I had considered teaching as a career for a while,” Weatherman explained. “I’d taught piano in the past and done some tutoring. I’d studied some foreign language as an undergrad, but it was a dynamic classroom experience later on that got me interested in German and I threw myself into learning the language.”

The Arkansas native says she realized studying German reminded her of her music studies. “There are a variety of skills to be practiced and explored, and that appeals to me.”

Weatherman will be spending her Fulbright assignment in Germany as an English teaching assistant at a secondary school.

The U.S. Congress established the Fulbright in 1946. It provides funding for students to participate in graduate study, advanced research, university teaching, and teaching in elementary and secondary schools.