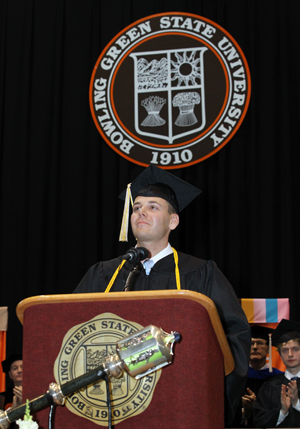 BOWLING GREEN, O.—It takes a certain measure of tenacity to serve for six years in the U.S. Air Force during a time of international conflict. But to earn your college degree at the same time requires an even greater level of commitment and perseverance.

Air Force Staff Sgt. Joshua Falso, now in his sixth year as an active-duty computer and network technician, recently received his bachelor’s degree from Bowling Green State University. He earned it through an online program in Advanced Technological Education that he completed while serving in several states and countries, including Germany and Iraq. Despite his travels and extensive military responsibilities, he graduated with a near perfect, 3.9 grade point average.

Falso was physically on the BGSU campus for the first time at his graduation on May 7, where he was the commencement speaker for the College of Technology. While most graduates were reminiscing with fellow students, Falso pointed out the difference in his experience.

“Four years ago, most of you were preparing for your freshman year while I was just arriving at my first duty station,” he said. “Most of you dealt with the stress of starting at a new school and worried how you would fit in. I was nervous about being at a new base and making a good first impression on my troop sergeant.”

He could not begin his college studies until he had finished his job training and learned to be an Airman, which probably turned out to be a good thing, he said. “As I look back, this actually helped me in my academic career because becoming an Airman meant embracing the Air Force’s core values, which are integrity first, service before self, and excellence in all we do. This gave me the discipline I needed to excel in my academic career.

“As a Combat Network Technician, I was responsible for establishing communications for the Special Forces, which meant dealing with ‘no notice’ trips to anywhere in the world, a constantly changing work schedule, and the expectation of being available to do anything 24 hours a day, seven days a week. Thanks to BGSU I was able to take classes no matter where in the world I was.”

Originally from Cleveland, Falso lives in Tampa, Fla., with his wife, Miranda. He plans to take his Air Force career to the next level with Officer Training School.

Falso transferred to Bowling Green in fall 2009 from the Community College of the Air Force, where he earned an associate degree in electronic systems technology. BGSU’s College of Technology’s is a member of the Air University Associate to Baccalaureate Consortium, part of the University’s ongoing efforts to meet service men and women’s educational needs.

Named a “veteran-friendly campus” by several military publications, BGSU has created a special office to consolidate veterans’ and active-duty student services in one place, and is a member of the Servicemembers Opportunity Colleges consortium. It is rated in the top tier of institutions of higher learning in terms of financial assistance, academic flexibility, campus culture and support services. A student group, the Veterans Assessment and Service Team, also reaches out to families of service men and women.

In his commencement address, Falso advised his fellow graduates to keep up their hard work even in the face of great odds. “I pull motivation from staying the course and accomplishing things that I was told couldn’t be done. And that feeling is second only to making those close to me proud.