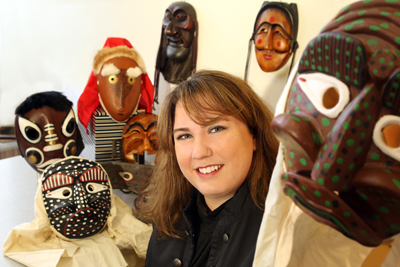 J.L. Murdoch with some of the Talchum masks she brought back from South Korea.

BOWLING GREEN, O.—J.L. Murdoch left her first Talchum performance bruised, bloody and exhausted. Murdoch, a Ph.D. student at Bowling Green State University, was in a rural part of South Korea as part of a Fulbright Fellowship for Research to study the little-known performance art. The word talchum means a form of play or dance performed while wearing masks.

“In total, it took about 27 hours of travel time in-country before I even saw my first performance,” she remembered. “Once you’re there you have to fight the crowd to get a position to see. I was physically hurt and my hand was bleeding from trying to get through.”

Murdoch hopes her research will introduce people to the art form, but says Talchum is also struggling to survive in its home country.

“Some people think in a generation it will disappear entirely, while others are involved in its preservation and are reaching out to spread the word.”

The masks can represent everything from a monkey to a monk. They are often embellished with natural items such as gourds or bark, and can be very colorful. Most of the masks have long muslin fabric attached to the back to represent hair.  Fur is sometimes used to accent them, while many have disfigurements, meant to show the moral fiber of the character.

Gender roles also play a part in a mask’s development. Some of the male versions have a hinged jaw meant for speaking, while many female masks are missing a mouth altogether, signaling that they are expected to be silent.

There are 13 preserved forms of Talchum, and Murdoch learned five of them during her time in South Korea. “I did perform in a front of an audience, but not in a mask. It was more of a recital for the class and there usually aren’t enough masks to go around.”

Talchum is performed in a series of vignettes with often surprising subject matters. “The plot lines can often include a lot of sexual innuendo and be pretty raunchy. I went to one performance where women heckled the actors the entire time and took the innuendo to the next level.”

Thanks to her experience, Murdoch says she now meets challenges in her life and research in a new, more productive way. “I had to build trust with the Koreans so I could truly learn about the culture. I actually ate sea slugs and live baby octopus.

“Living in a country and being so immersed you learn to ask a variety of questions and to step back and see where the other person is coming from. It has helped me navigate my daily conversations.”

Murdoch is applying for grants and is hoping to work in a situation where she can make more regular trips to South Korea.

Dr. Scott Magelssen, an associate professor of theatre and film, says Murdoch’s dissertation will get people talking. “It will really blow the lid off the English-language discussion of this art form. The research to this point hasn’t gone very deep, and this will definitely be sought-after scholarship.”