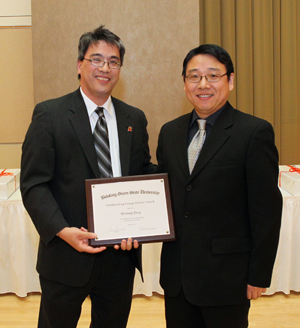 BOWLING GREEN, O.—Bowling Green State University has conferred the title “Outstanding Young Scholar” on one of its most productive faculty members, Dr. Weidong Yang, biological sciences. Since coming to the University in 2007, he has determinedly pursued his research into the means by which single molecules pass through the infinitesimal opening into the nucleus of a cell.

Understanding this mechanism is crucial to understanding and treating diseases such as leukemia and other cancers. Until he and his research team mastered the process of capturing a three-dimensional, moving image of this critical transport, it was unknown both how the transport system worked and what path materials and information took.
Presented by the Office of Sponsored Programs and Research, the award gives Yang $2,000 and another $1,000 in a research account. It was given at the annual Faculty Recognition Dinner March 22.

The sum will augment the three-year, $347,500 National Institutes of Health (NIH) grant Yang received, which funded the upgrade of his lab and the purchase of necessary equipment, such as a powerful microscope and high-speed camera. A second NIH grant, beginning this semester, will bring approximately $1.7 million more to his research project “Three-Dimensional Super-Resolution Microscopy Study of Nuclear Transport.”

“Dr. Yang arrived at BGSU in 2007 with an accomplished record for research in biophysics,” wrote Dr. Jeffrey Miner, acting chair of the Department of Biological Sciences. “He started immediately building his lab and obtaining research funding as well as generating eight publications in the best journals in the world. . . . The uniqueness of his research has been clearly recognized by the top researchers in the field.”

Yang, who also has a joint appointment with BGSU’s photochemical sciences department, has been much sought after as a speaker at gatherings of other single-molecule researchers, whose work blends biology, chemistry and physics.

His studies have provided important unique opportunities for graduate students and undergraduates at BGSU to participate in groundbreaking research, Miner said. In addition, he is “a clear partner in all aspects of University life. He has taught introductory-level biology to non-majors, participates in departmental committees and actively interacts with faculty across the research spectrum.